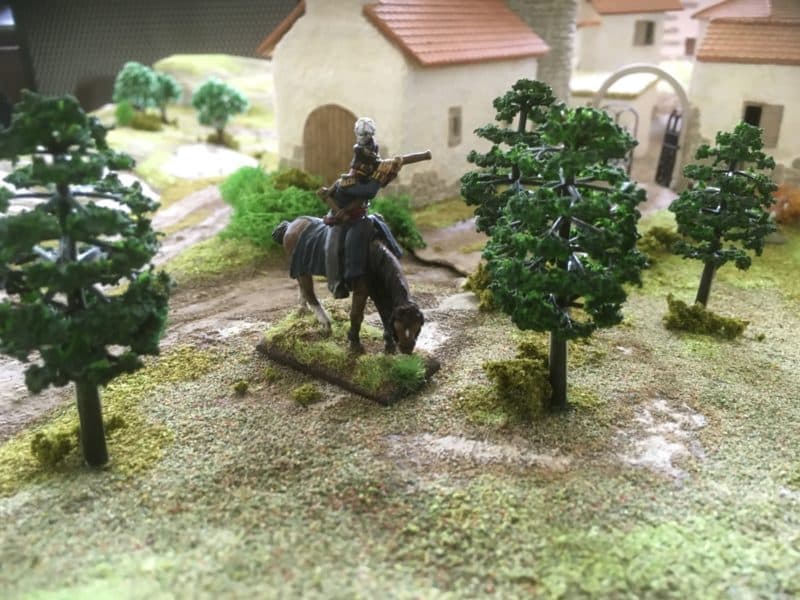 As good neighbours and friends of Warlord Games, we were very pleased to be invited to their Open Day to put on a Black Powder Napoleonic demo game. It’s no secret that I am a great admirer of the Black Powder Rules system in general and the Napoleonic period specifically. After a conference with my gaming group, the NG13 gamers we decided to re-run a version of an early demo game that we had played, ‘Combat at Foz D’Arouce’, this time using Black Powder as the rules for the game. You can see the battle Report for the ‘original’  Foz D’Arouce at the Bingham Napoleonic Days Event here: 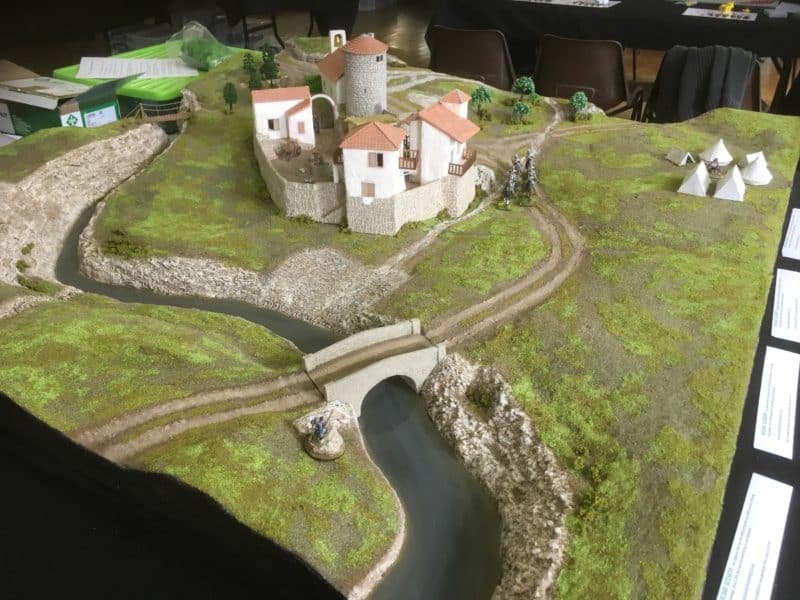 Foz D’Arouce – setting up the table.

The challenge in using Black Powder was that the table is only 4 foot by 4 foot. However, we have our own version of Black Powder that we use for our club games called ‘Salt Peter’. This stripped back version of Black powder allows us to play a decent club game on a six foot by four foot table in an evening. To be fair, it’s not so much ‘stripped back’ as sparing with the use of any of the additional rules or supplements. All measurement is reduced by two thirds and the units used are generally half the normal size, so a Battalion of troops is represented by 12 figures. Of course, there’s no reason why they should be referred to as a Battalion. They could just as easily be a company, with the ‘Brigadier’ or commanding officer, in charge of a detachment of Company’s. Purists may baulk at such a thought but the aim of our games is to spend a couple of hours in good company, using the figures that we have painted and collected.  We try to restrict the ‘serious’ side of the hobby to our research, reading, painting and modelling. Gaming is for fun! 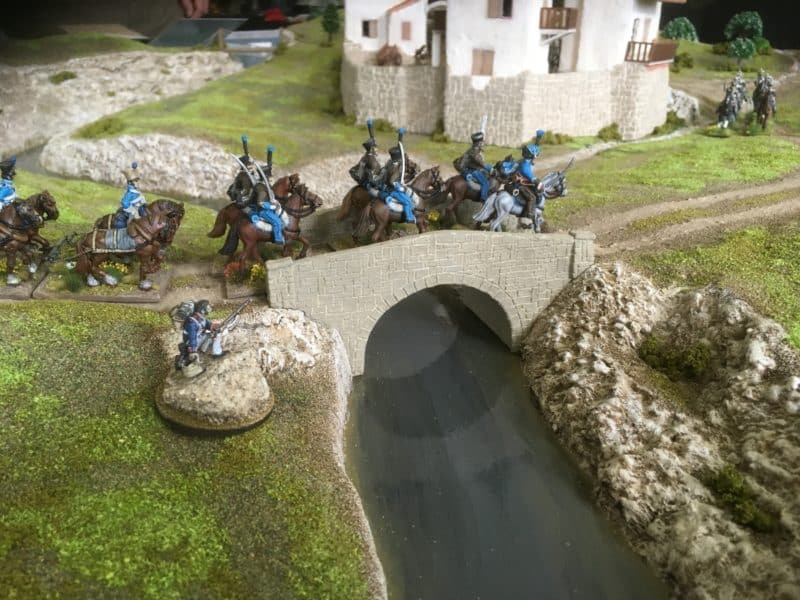 French Hussars – these troops would be late for the battle!

The game would again be using the superb table that Pete Harris had produced and this time, it would be Portuguese versus the French, for no other reason than I had a Portuguese Brigade that needed an outing on the table! Having said that we had stripped back the additional rules in Black Powder, we did have some extra Scenario specific rules that we had agreed on before the Battle. These related to deployment, command structure and limitations imposed by the scenery. These are listed below in the additional PDF. 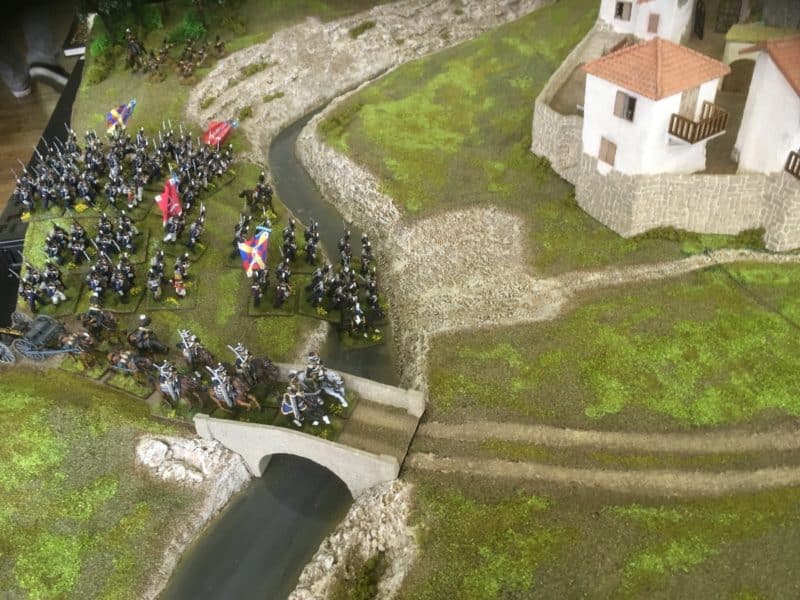 And so to the Battle itself. Pete, playing the French, had won the roll to choose the table side for deployment. I won the roll to decide who went first. Apart from a small unit of Skirmishers (Cacadores for me!), both armies were deployed off table and had to be ordered on. In addition, the units would initially be in march column. The commanders might know that the enemy were coming, but our troops didn’t! We had also placed a limitation on the number of orders that could be given – two was the maximum, which not only restricted movement but made fancy formation changes a bit trickier…. My Portuguese Army deployed in full but was somewhat crowded as it attempted to cross the river using the bridge and the ford. The French had no such obstacles to negotiate and the first brigade marched on without hindrance. The second brigade, however, failed it’s order and stayed off the table. 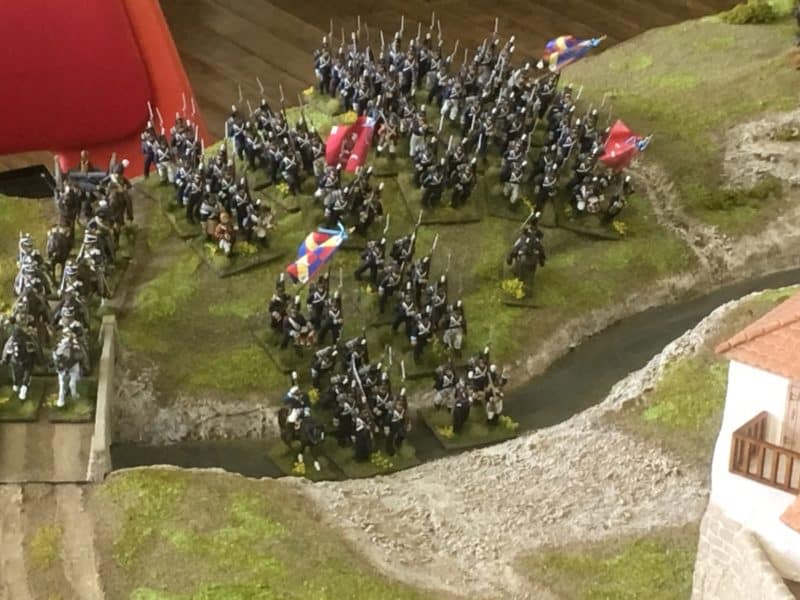 Portuguese delayed by the river crossing

By Turn Two the French advance party of Skirmishers had reached the top of the Village and a Company of troops also marched towards the gates to fortify themselves inside. However, the second French brigade still refused to come onto the table. What should have been a bonus for the French then turned into a slight distraction. We had said that any commander rolling under 4 on an orders roll would receive a ‘bonus’ unit of skirmishers. The French achieved this in turn two and the second unit came on to the table – they also headed for the village. 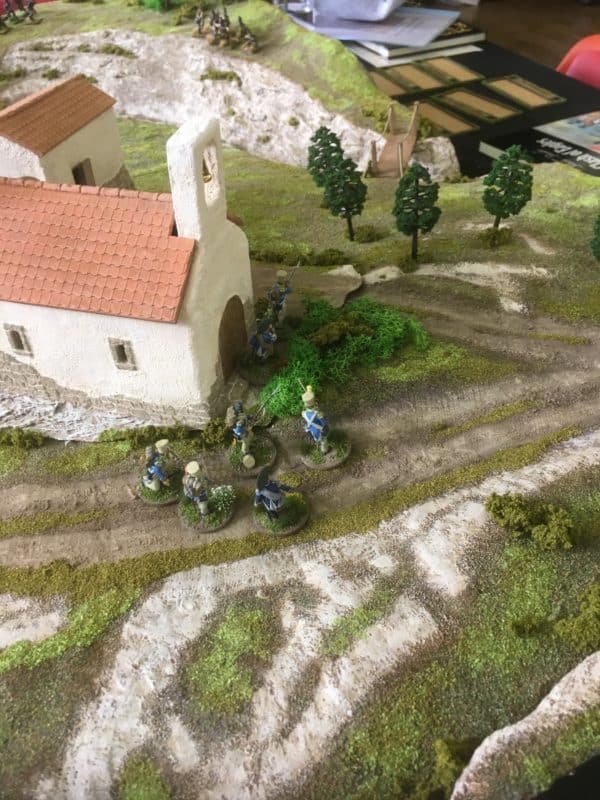 The Portuguese had managed to get a squadron of Dragoons across the river to threaten the French advance, as well as deploying their artillery. However, the balance of the force was still either on the wrong side of the river or stuck in it. The Cacadores, who were supposed to be rushing to take the footbridge at the top of the village had decided that a slow walk to admire the view was more appropriate and were making poor progress. The opening shots of the battle started with little effect but it was game on! 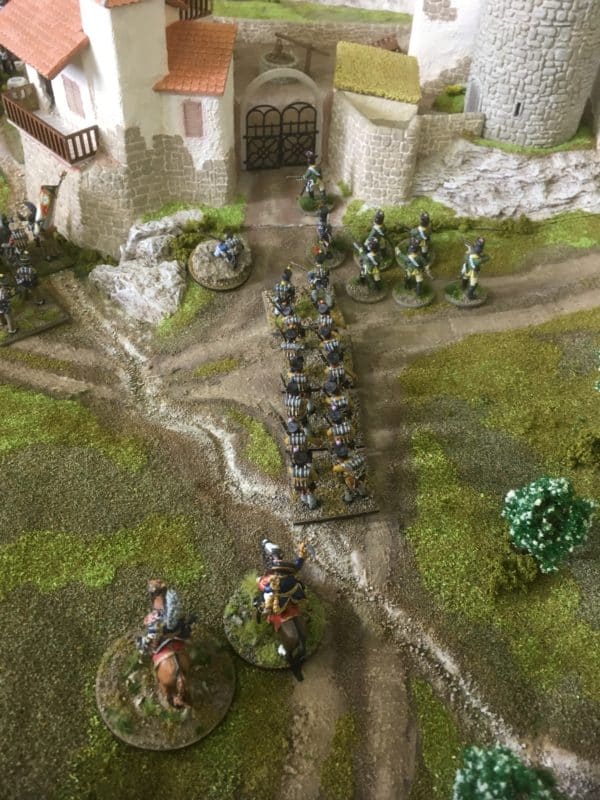 French about to march into the Village

With the possibility of getting both units of skirmishers into the village the French commander halted his other battalion and diverted them to the main combat. The second French Brigade still refused to come onto the table! After all, Pete had spent the last few days lovingly painting a unit of French Hussars just for this scenario…why would they want to get into action and spoil their uniforms! If the French were being shy, the Portuguese were still struggling to clear the river. Once across, each unit had to test to see if it was disordered. To pass the test a 4+ was required. 3 out of four of the Portuguese failed! Meanwhile, although now joined by a ‘bonus’ unit of 95th rifles, the Cacadores were still taking their time to move up to the footbridge and now decided that it was time for tea!

The only good news was that the French were slow to take advantage of the Portuguese congestion. Their advance delayed by the move towards the village. The Dragoons had put a French unit into square under the nose of Portuguese artillery, holding their line. This at least kept the French at bay. 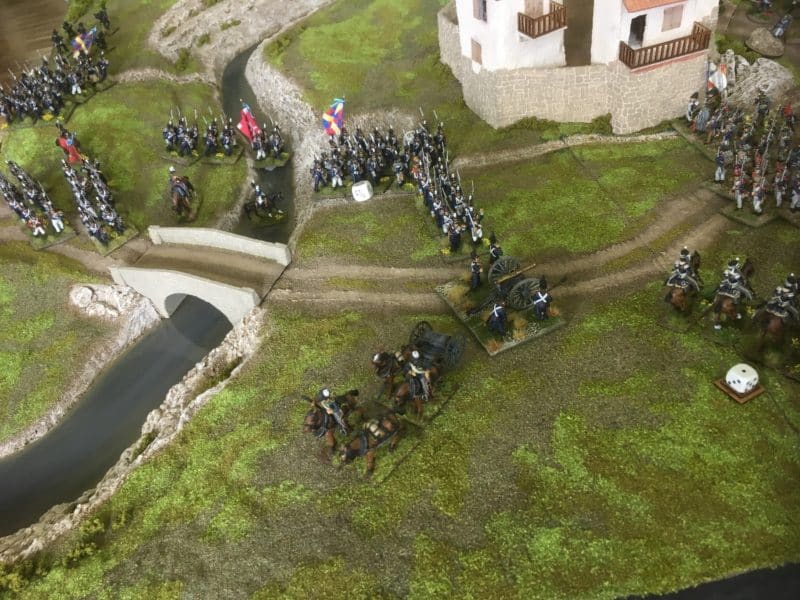 Portuguese cross the river but are caught in march column.

By now, Pete had a sudden moment of clarity and realised that with his General off table, he was entitled to a re roll should his missing brigade fail their orders! In addition, instead of trying to move the cavalry first ( Who required an 8 on two D6) he would start with the infantry, who in column, needed a 9+ to get moving! This new strategy worked and the second French brigade moved onto the table. Things were not looking so good for the Portuguese. To add to their woes, one of the Portuguese units attempted to reinforce the first one over the river only to find itself stuck in column with it’s flank facing a French unit… merde! 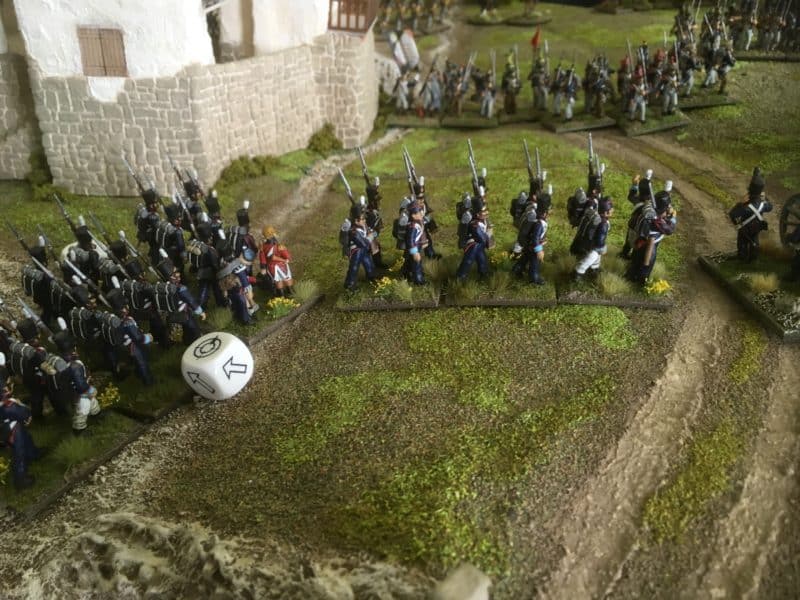 It was too tempting for the French to ignore, they charged in to attempt to batter the March column and break through. Confident of victory in this part of the Battlefield, Pete directed half of his second brigade up the hill behind the village to head off the threat of the very slowly approaching Cacadores and 95th units. The Portuguese were made of sterner stuff! Despite having to take the attack in the flank, with no reply permitted, they survived the first round of combat passing their morale test and turned to face the French unit, eventually winning the combat and pushing the French back! The Portuguese artillery fire into the unit in square was beginning to tell and casualties were mounting on both sides. 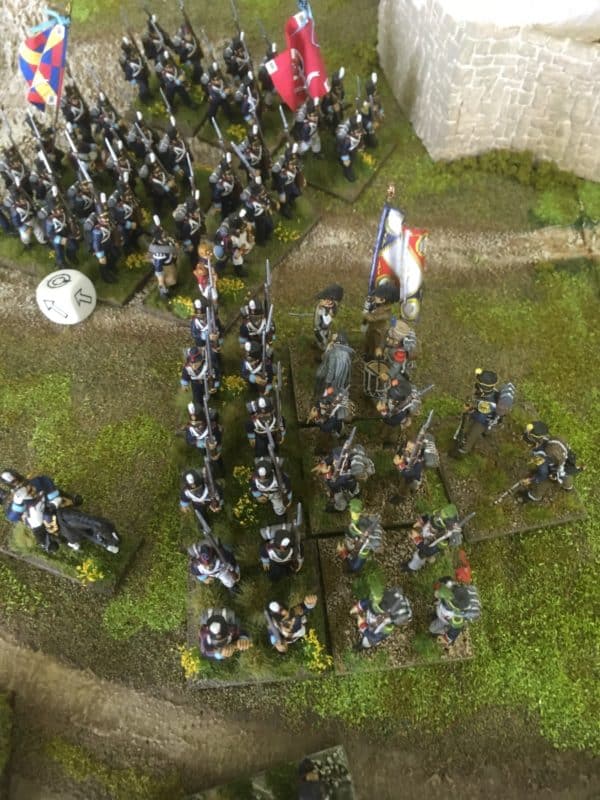 One of the French units broke under fire, running from the battle, forcing the French Commander to march his other brigade back down the hill ( Hmmm that sounds like a British tactic, first perfected by The Duke of York….) to support the forward brigade. Despite this set back, the French inflicted sufficient casualties, using additional fire from the skirmishing units now safely in place in the village, to break the Portuguese brigade, who retreated back across the river. Meanwhile, in all the chaos, the second Portuguese brigade had started to deploy and mauled the lead French brigade, causing it to break. The Cacadores had made it to the bridge…. 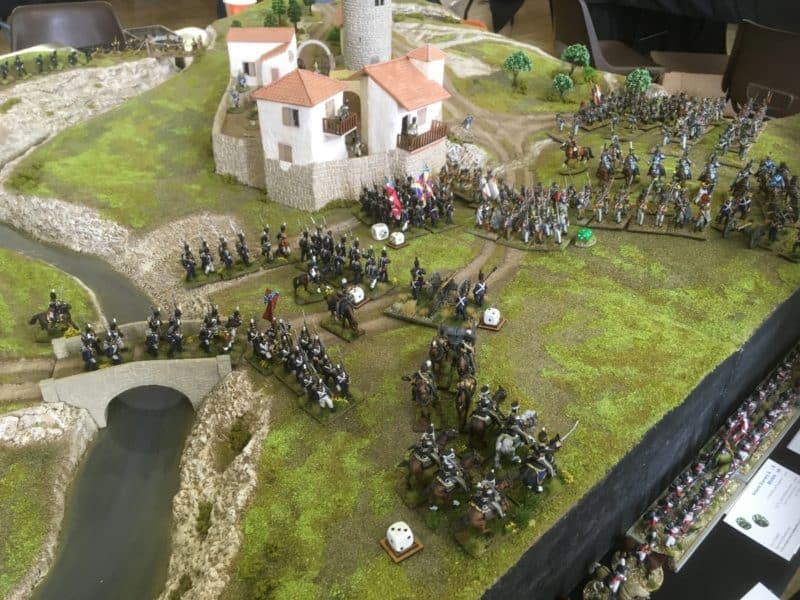 Although the Portuguese had taken a beating, with the lead brigade broken, the second brigade had now deployed successfully in strength and started to hammer the French. The French were now in a worse position. The retreating brigade was hampering the movement of the second brigade, blocking line of sight and because of the earlier attempt to flank the village, the brigade was strung out and it’s forward units vulnerable to fire. A successful round of shooting from the Portuguese persuaded the French that the battle was lost and they started their withdrawal from the field. The Cacadores never did cross the bridge! 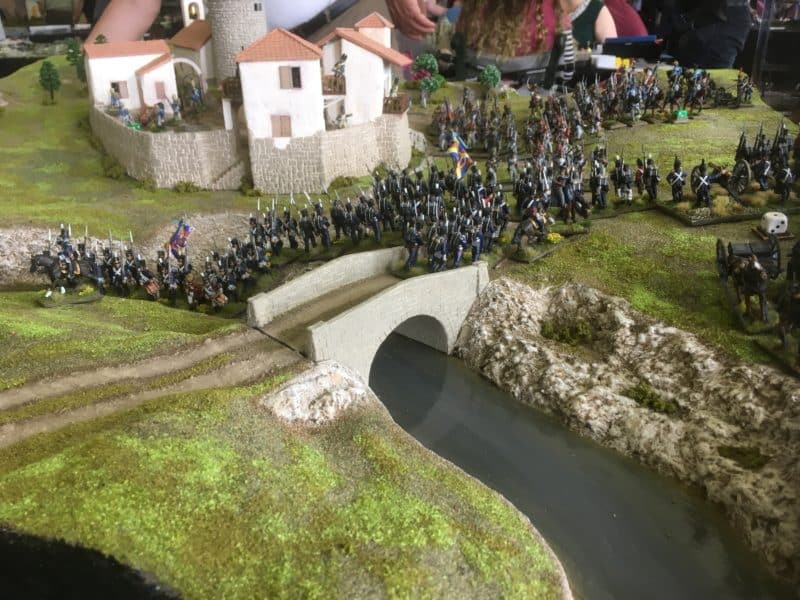 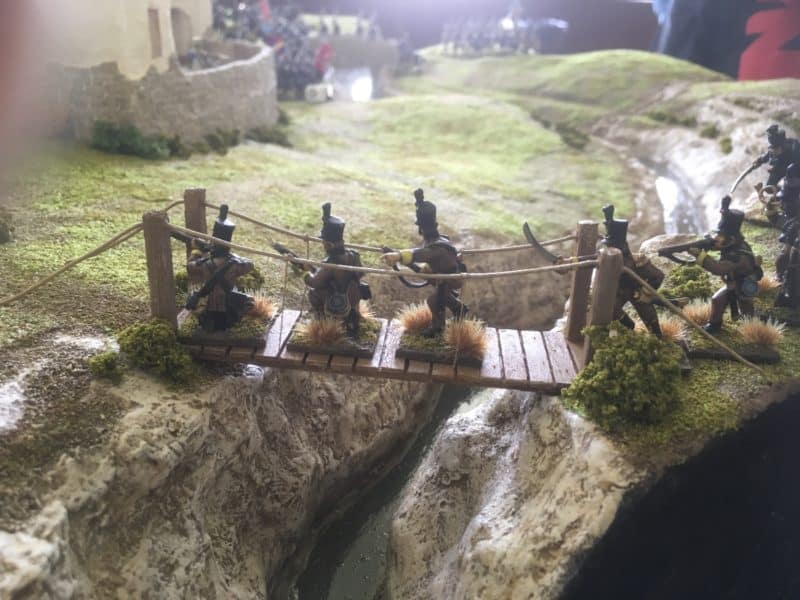 A marginal victory for the Portuguese and a most enjoyable game on a most enjoyable day. We played the game at quite a slow rate as we were stopping to chat to visitors to explain how that game was going and answer questions regarding the scenario.

The Warlord open day was a great success and I think the best yet. The main hall was packed full of demonstration games – I was very pleased to be able to try out the forthcoming Black Seas game – it looks great! I’m sure that Warlord will be running the event next year and I would recommend attending. As well as the chance to meet with the Warlord team of sculptors, designers and staff, try out the various Warlord games, there are plenty of other guests there to talk to – Sarissa Precision, Mantic Games and the Terrain tutor to name a few.

I’ve added the Quick Reference sheet that we used on the day for the shorter ranges etc here:

It’s a Black Powder Edition 1 sheet, so ignore the modifications for skirmishers hitting  with +1.

The ‘house rules’ for the game are here:

Arcane Scenery have most of the Warlord range available, as well as some 60 other manufacturers. Even better, we send post free to most world wide locations. You can visit our shop here:

You can see the Warlord report of the day here: