The launch of ‘Never Mind the Billhooks’ has caused plenty of excitement and prompted me to add a few more pieces to my army. I was still three figures short of completing my Cavalry contingent, which gave me a nice excuse to go shopping at the Perry’s… 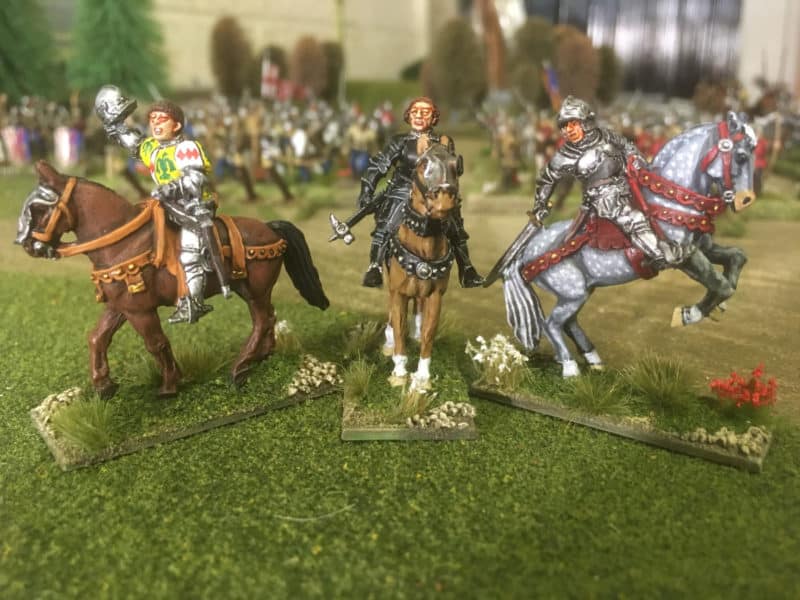 Salisbury, Richard of York and Warwick

The three mounted figures complete two units of eight mounted Knights and give me a spare mounted commander to lead my light horse or another Ward if required. The pack that I choose contained models of Richard, Duke of York, Salisbury and Warwick. 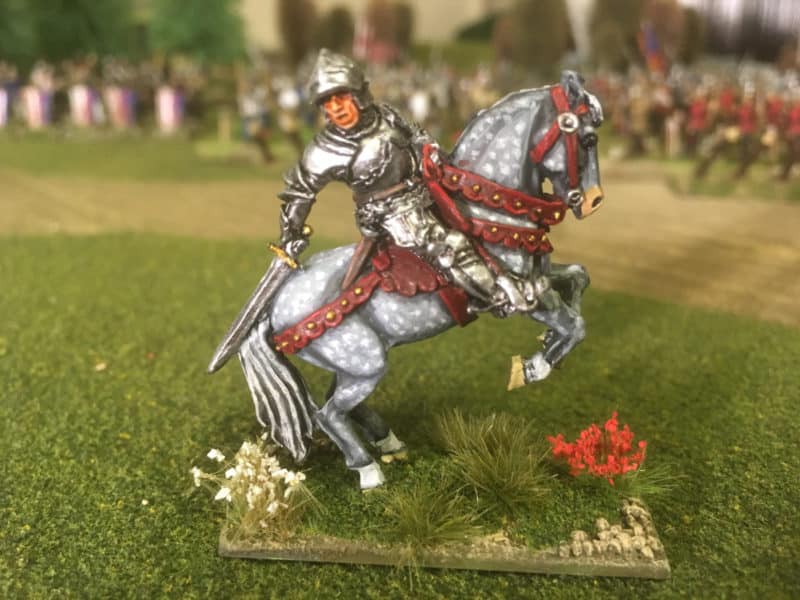 I particularly liked the Warwick figure and decided that he would be one of my commanders. I painted the horses using the tutorial from Art Master Studio on you tube. It’s a bit long winded, but very good. I actually followed along when it came to painting the dapple grey that Warwick is mounted on. I used exactly the same colours listed in the video and the other ‘triples that Toby suggests also work really well.

Warwick turned out quite nicely so I decided to give him leaders base and a standard bearer. I still have half a box of Perry plastic WOTR infantry, so it was a simple assembly and paint job, following my usual process. I used a photocopy of the flag in the instruction sheet. 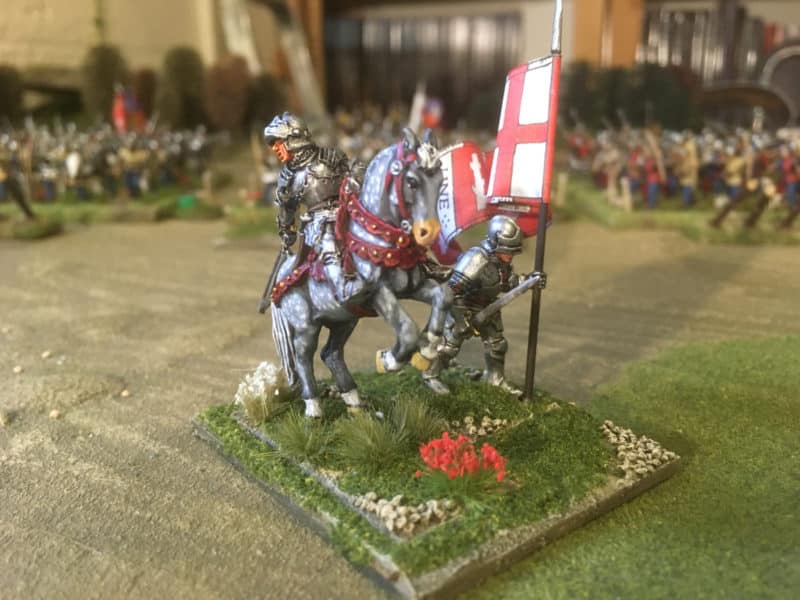 I had also ordered a wagon from the Perry’s with the idea of using this to represent the ‘Extra Arrow Supply’ special event card. It would make a nice piece of battlefield scenery regardless. Assembly and painting this model was very straight forward and I went for a functional plain wooden finish for the wagon. I used Vallejo ‘Old Wood 310 with a few washes and dry brush coats to bring out the detail. 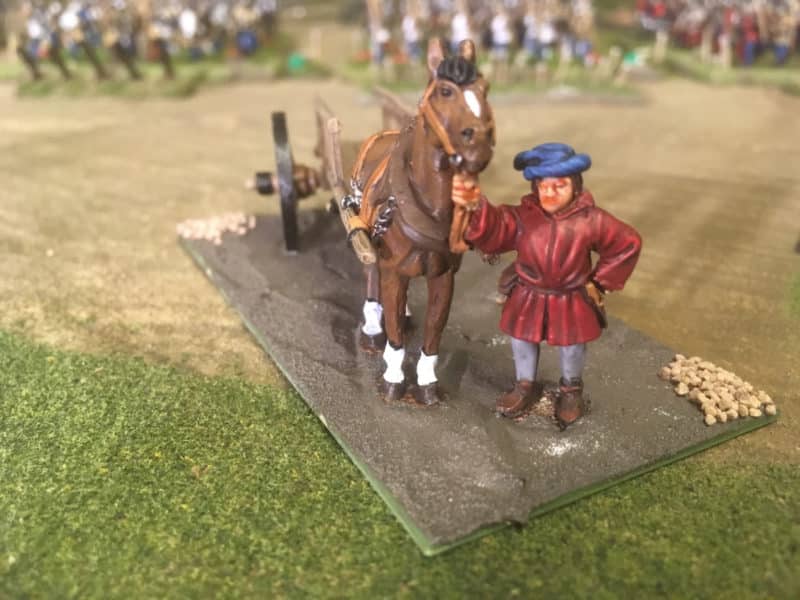 Perry Wagon being based 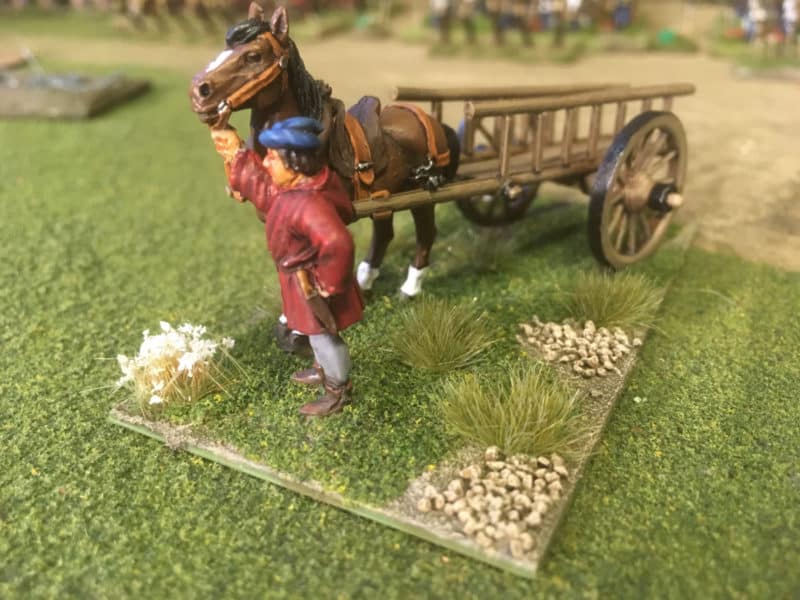 Whilst chatting to Andy Callan about the subject he pointed me in the direction of a picture in the Osprey ‘English Bowmen’ which showed a soldier re supplying the troops with a barrow of some description. I thought that it would be fun to make something similar – an Arrow Barrow! If you click on the link below, arrows (2), you can see the picture and Andy’s notes!

I used a figure from the Perry’s set and did a bit of minor converting. The pose was pretty close to someone wheeling a barrow so the only changes needed to the torso was to carve away a bag that was in the way. I then used an Archers hand for the right side and a bill mans hand for the left side. I had to do a bit of re positioning and filling but it all went together quite well. 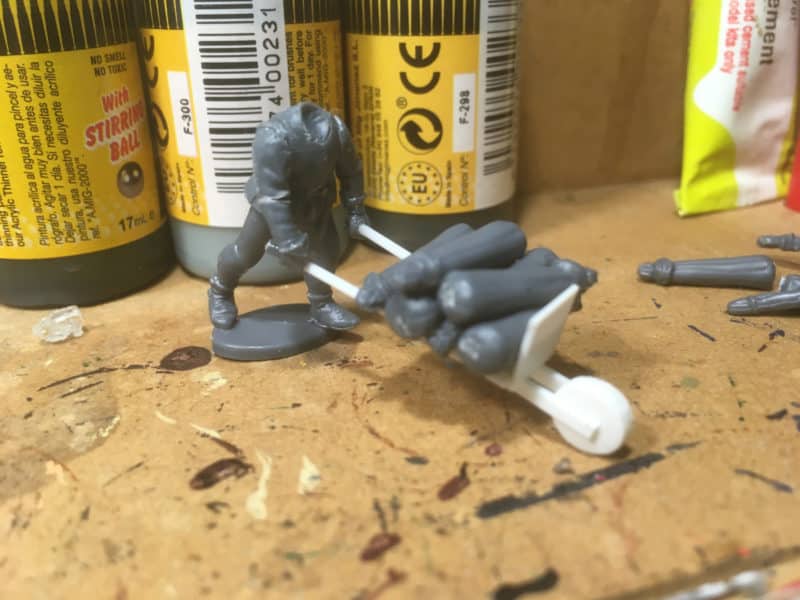 As for the Arrow Barrow itself, I just used some scrap plastic card, a bit from my spares box for the wheel (A shirt button with the holes filled in would have done the job!) and some plastic rod and strip to build something that looked like a medieval wheel barrow. I’ve no idea how accurate it is! 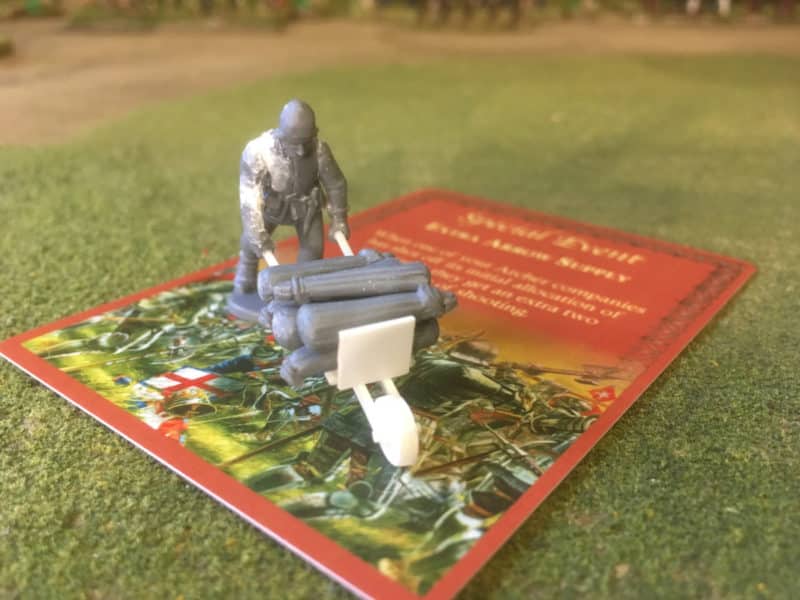 Ready for priming once the filler is sanded down!

The load is made up of the canvas arrow bags that come with the Perry’s Light Cavalry set that I had spare in the bits box. One of my friends remarked that they looked like marrows…I quite like the idea that Baldric was sent to get arrows and came back with marrows….’Baldric run and get some arrows’. 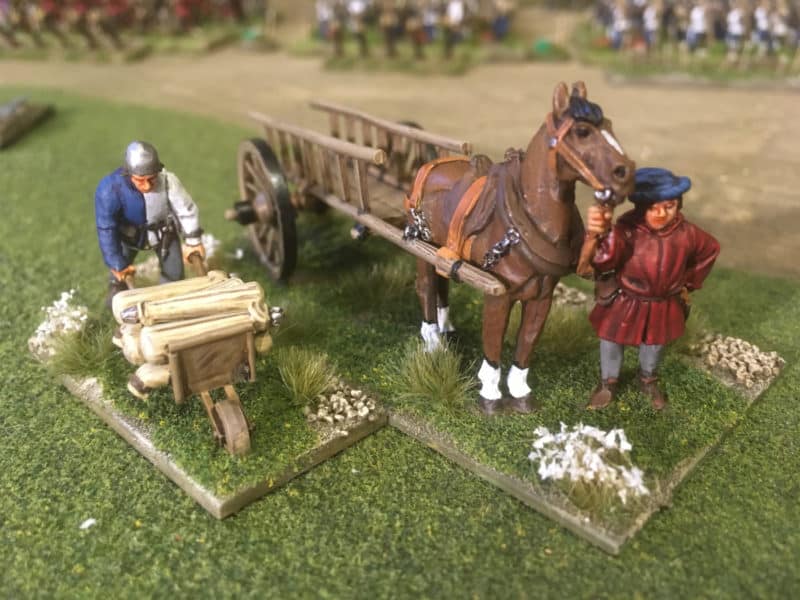 Next up, I started work on the ‘Hidden Ditch’ special event card. I thought that it would be a nice terrain piece regardless as to whether I used it in Bill hooks. I’ll show you how this project went in my next blog!

You can see our range of Evergreen plastic strip and Rod here:

MDF bases can be found here: