At last, I managed to get a war game in before the latest lockdown! I joined up with Andy Callan, his brother, Ian and Mark Lodge of Jacklex miniatures for a full day and evening of wargaming this past weekend.

One of the battles that we fought during the weekend was a War of the Roses battle using the Never Mind The Bill Hooks rules. It seemed sensible to use the latest scenario that Andy had written for Wargames Illustrated, issue 394, ‘The one about the ‘Englishman, Irishman and the German’. It is based on a fictional scouting encounter just prior to the main event at Stokes Field, the final battle in the War of the Roses.

I’ve mentioned that both Andy and myself live in Bingham, just a few miles down the road from the village of East Stoke. I have visited the battlefield on a number of occasions, most recently,  just a couple of weeks ago. I doubt that things have changed very much over the intervening centuries since the battle. The River Trent may be more constrained by it’s banks now but follows a similar route. The hedgerows may have changed but the lie of the land will be much the same. 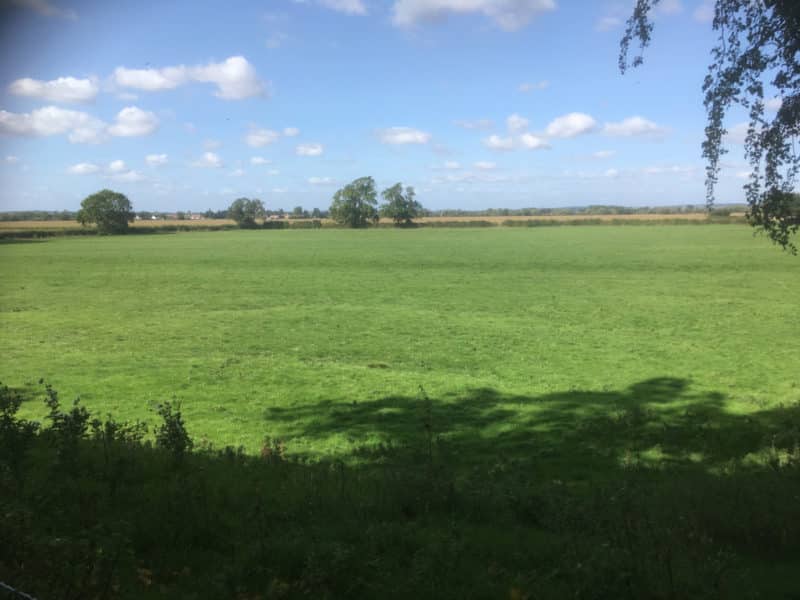 Stokes field – the view to Fiskerton and the Trent. It’s possible that the rebels camped in the far field to the right of Fiskerton (the white dots on the left of the picture!) the night before the battle. 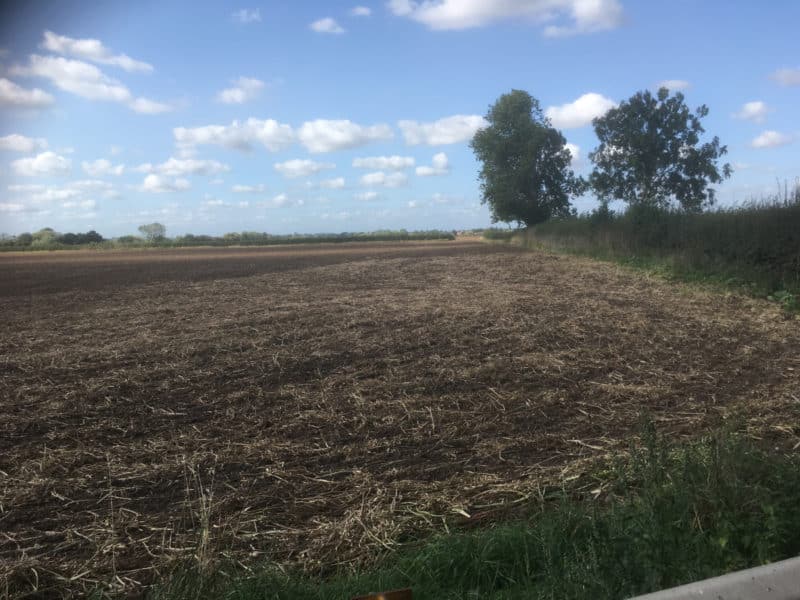 Ideal Marching country – not so good when you are running from cavalry!

It looks like an ideal place for a battle as there are no major obstacles or hills, just a typical piece of gently rolling English countryside. You can see for miles in some spots, particularly as the ground rises away from the Trent above East Stoke. The view can be deceptive though. There are enough rises and folds in the ground to hide an army and some places where the land falls sharply is treacherous, if you are not careful. What was a minor inconvenience when you are advancing in good order would be a death trap when retreating in panic. A good example is the so called ‘Red Gutter’ where the rebels were cut down as they routed. 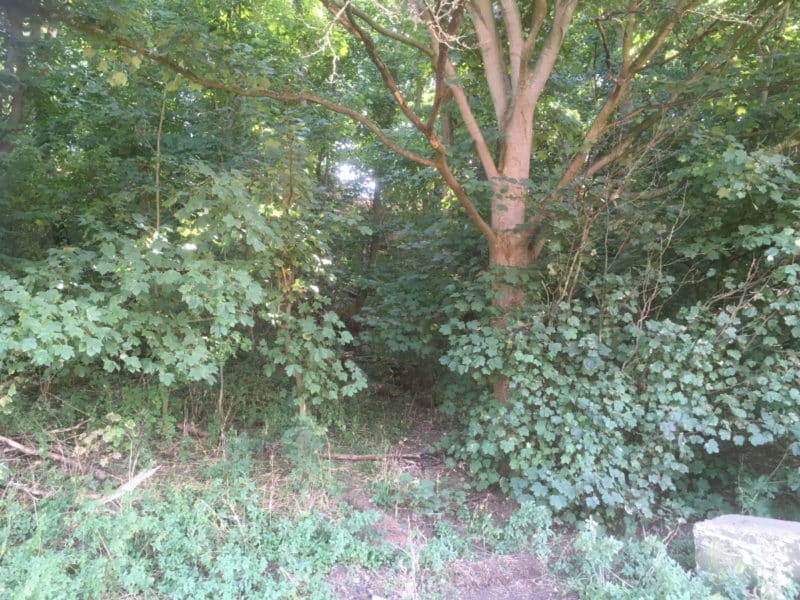 The drop down to the ‘Red Gutter’ 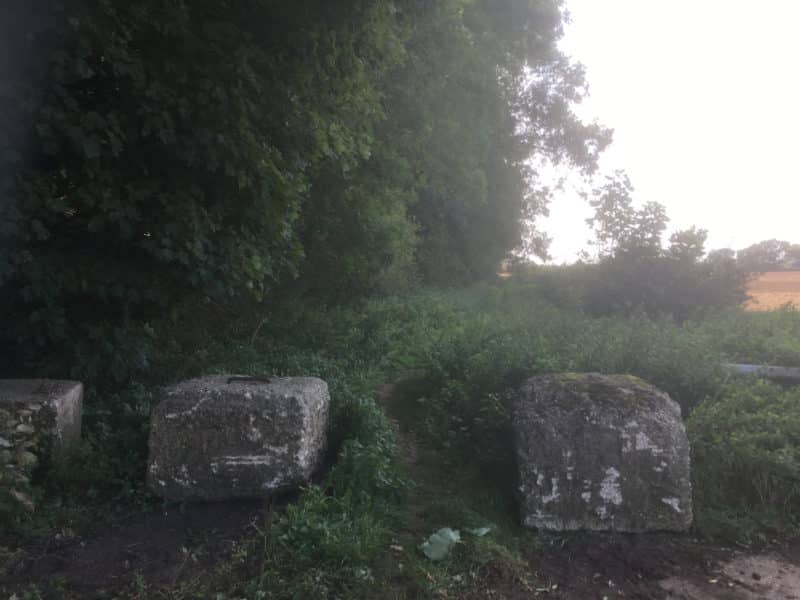 The Red Gutter at Stokes Field

I think that the above picture shows the entrance to the ‘Red Gutter’ – an enclosed lane at the base of the rising ground behind the battle field, on the retreat route to the safety of the Trent crossing at Fiskerton.

And so onto our game. We more or less followed the orders of Battle and additional special rules that are detailed in the article, with Ian and Mark playing as the loyal Lancastrians and myself leading the rebel Yorkist alliance! 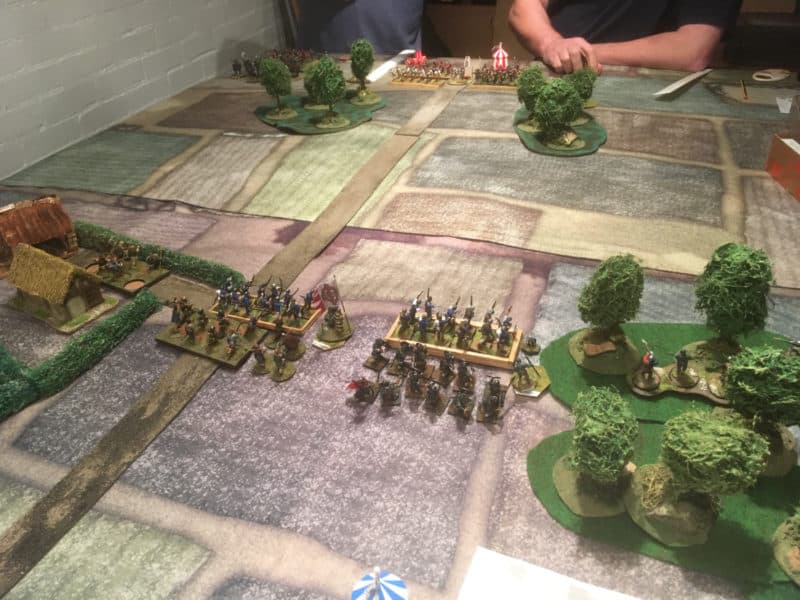 I deployed my mixed contingent along the ridge line with the Irish Kern skirmishers holding the village, the archers and Gallowglass holding the centre and the German hand gunners in cover in the woods. Out of shot, Lord Lovell was leading the light Horse protecting the flank of the village. Facing them was a powerful force of Bows and Billmen as well as a unit of light horse and a group of skirmishing archers.

We started again. This time the Lancastrians were not going to be caught by a sucker punch  and they advanced to use their superior archery force to beat back the rebels! 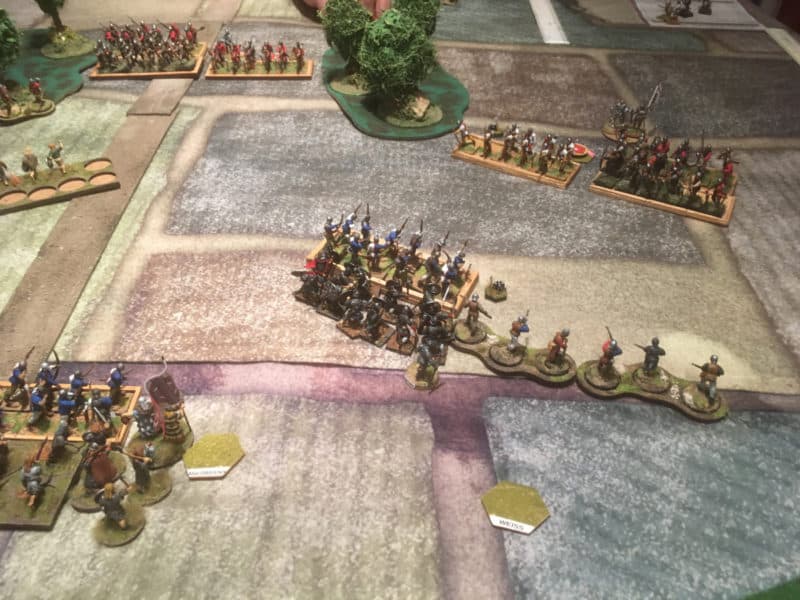 This game was more of a match, with Lancastrian Archers wiping out both units of kern skirmishers, daunting a block of bows and Gallowglass and whittling down the rebel army. Once again, Lord Lovell and his light horse were able to save the day with a rather dodgy counter charge through Lovell’s own evading skirmishers…On reflection, the counter charge should not have happened, as whilst it wasn’t explicitly against the rules, it certainly pushed the spirit of them. With Lord Lovell on the loose again, the Lancastrian flank was tied up, allowing the Gallowglass unit in the centre to force a charge home against the bills and bows there.

Whilst vulnerable against archery, the Gallowglass are formidable in combat and they were able to carve through the centre units of Lancastrian Bows and Bills causing enough casualties to collapse the Lancastrian army morale. Another very close victory for the rebels. Unfortunately, as I became more involved in the battle, I forgot to take pictures! However, after a post battle VAR check, over a beer or three, the general consensus was that although the Rebels were deemed to have won on the night, a review of the match play meant that at least an honourable draw would have been a fairer result! 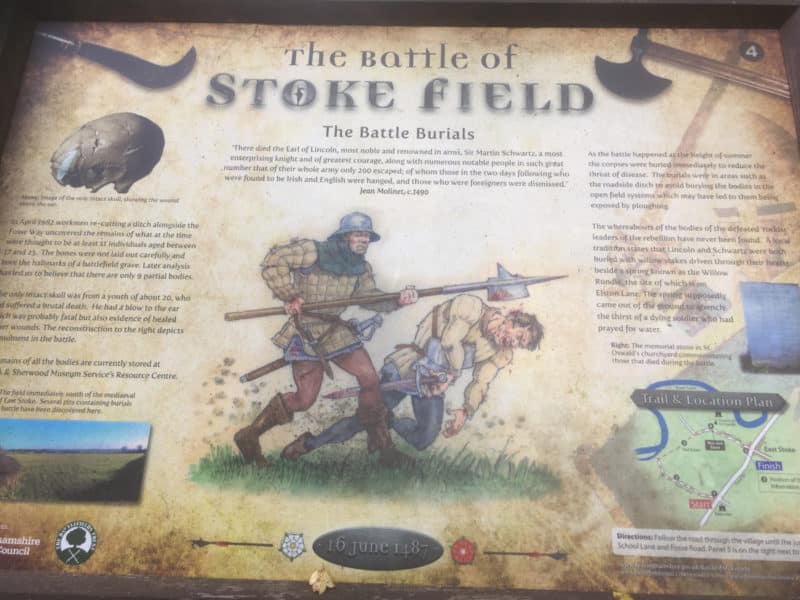 Story board from the battlefield

In the post battle review, the counter charge by Lord Lovells light cavalry had certainly influenced the out come of the battle, perhaps unfairly so. Also mixing English bowmen and Irish Gallowglass in a block, whilst again, within the rules, is probably stretching things even though they were obliged to follow the ‘Brexit rule’ to check if they could pass through each other! It’s a point that will be addressed in the expanded rules and I wont cover it here. That said, the lack of initiative and undue caution by the Lancastrians caused many of their own problems. There were opportunities to kill off units that were just not taken. The archery proved to be dominant in the early stages of the battle but some units ran out of arrows and perhaps Mark was a tad unlucky at one point when rolling 30 dice needing a 5 or 6, he only managed 4 hits…Damp bowstrings I think!