Prince Bernard was the commander of the second brigade of the Dutch Second Division. It was his brigade that was the first to arrive at Quatre Bras, and joined later by the First Brigade, they held the cross roads there for some 24 hours until reinforced by Wellington late in the afternoon on the 16th. The battle of Quatre Bras is somewhat overshadowed by the much larger affair at Waterloo a couple of days later. If Wellington was ‘humbugged’ by Napoleon in the opening stages of the campaign, it was the Dutch Brigades that initially saved the day at Quatre Bras and handed back some degree of initiative and contol to Wellington.  Some commentators have said that the holding action by these two brigades of the Dutch 2nd Division was one of the most important actions by any of the coalition brigades in the whole of the Waterloo Campaign. 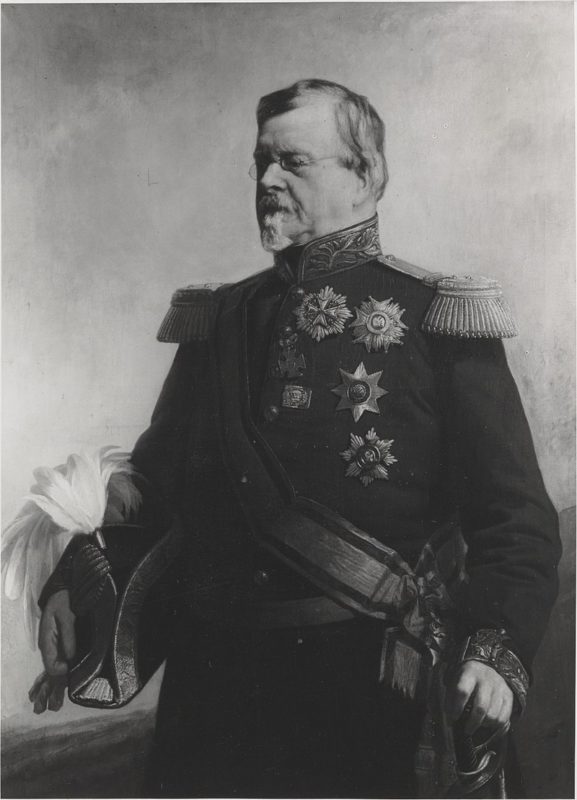 Following the Battle of Quatre Bras, Prince Bernard commanded the Dutch Forces holding Wellingtons far left wing, including the important farm houses at Papelotte, Frischermont and La Haie. Papelotte was temporarily taken by the French but subsequently recaptured. The Dutch forces here were also responsible for linking up with the Prussians although my understanding was that there was some initial ‘Blue on Blue’ action before the two armies were joined to advance against the French!

Followers of my blog will know that I had painted up a couple of the Nassau Battalions as part of a demonstration game at the Bingham Napoleonic day, where we based the action on the Battle for Pappelotte. You can read about the fictional battle for Papelotte in my blog here:

To read how I went about painting my Nassau Battalion, you can start here:

However, despite painting 36 of the Nassau-Usingen Regiment second battalion and a further 12 figures to represent the volunteer Jaeger battalion, I had not managed to complete any Staff Officers. The Perry’s produce a lovely pack of figures representing Prince Bernard and his staff and it was this pack that I decided to add to my collection. I would paint one figure as a Brigade Commander and the other two models would be based together as a small vingnette so that I could use them as an Divisional Command stand in the event that I do actually get around to painting the rest of the Division… 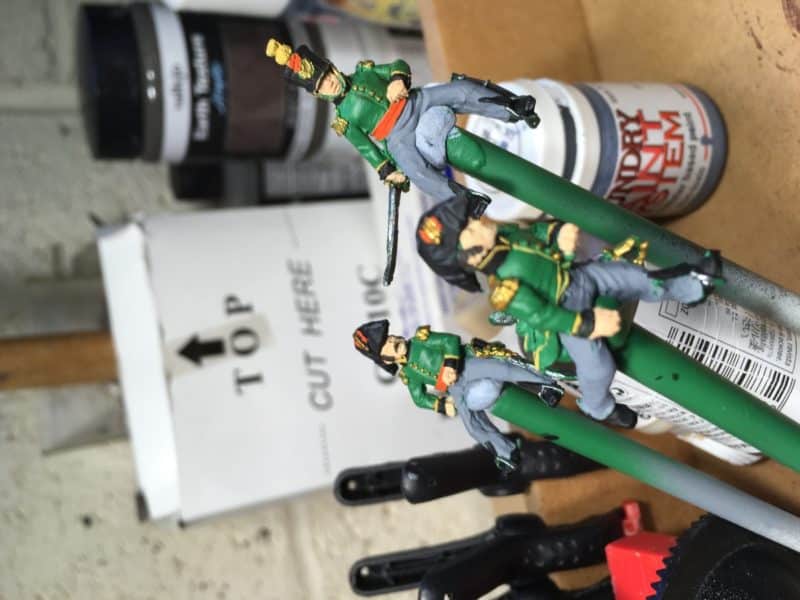 As with the rank and file I decided to take the ‘easy’ route when it came to painting the command group and simply primed the figures with Army painter Greenskin spray. It was then just a question of block painting in the other colours of the uniform. I followed my usual reference from the Mont St Jean web site and the research that I had conducted for the Nassau Infantry. It’s possible that this is incorrect for Prince Bernhard, as he may have been wearing a blue Dutch Uniform but I am not too concerned – I am painting a Commander for my Black Powder army not a specific diorama of the Prince and his staff. 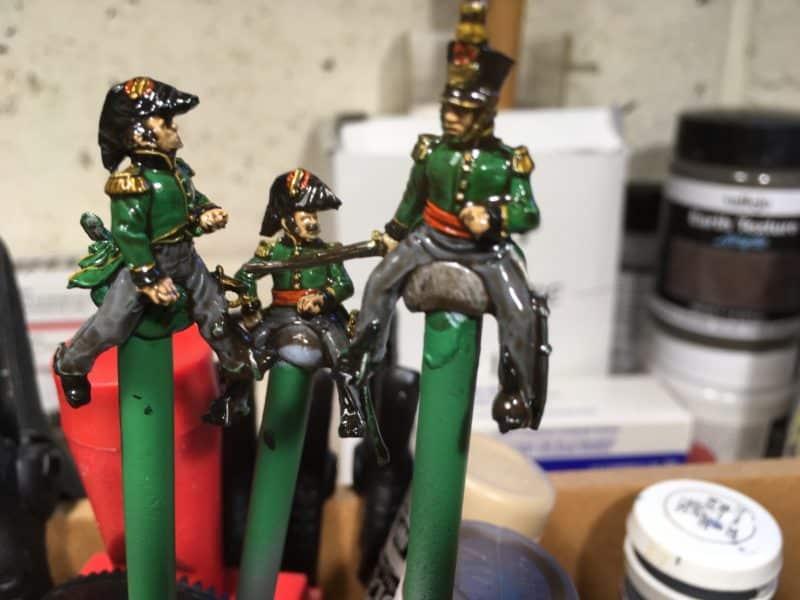 The figures have Dark Tone Quick shade brushed on.

The next step is to brush on Army Painter Dark tone Quick shade. You could use ink but I like the protection the varnish gives, especially when painting metal figures. When it came to the horses, I didn’t use the quick shade method. I’m happy with my three colour dry/wet brush technique that I find quick and easy. 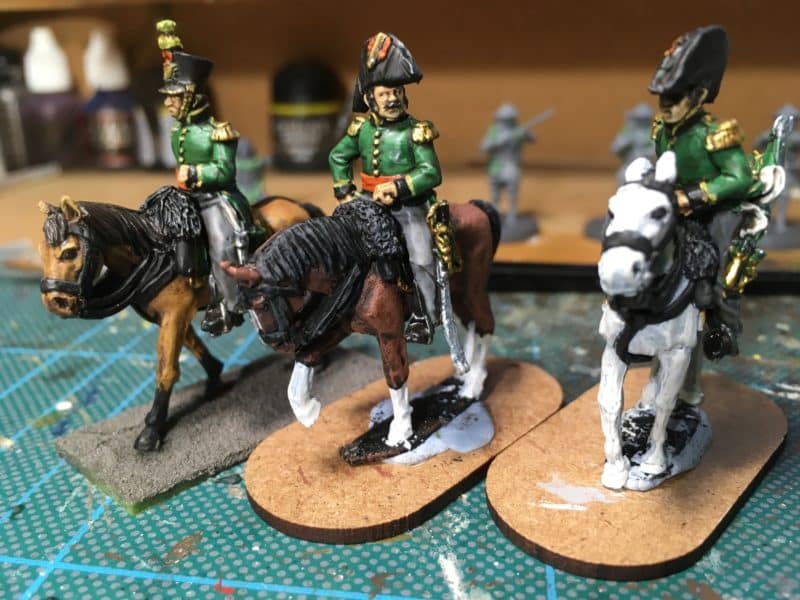 The figures on horseback

Once the figures were coated with Matt varnish, I re highlighted the metallic and the lighter colours as well as retouching and obvious mistakes – although looking at the pictures now, I think I have been a bit heavy handed with the horses eyes -something I will go back and fix and perhaps a dab of gloss varnish will help. 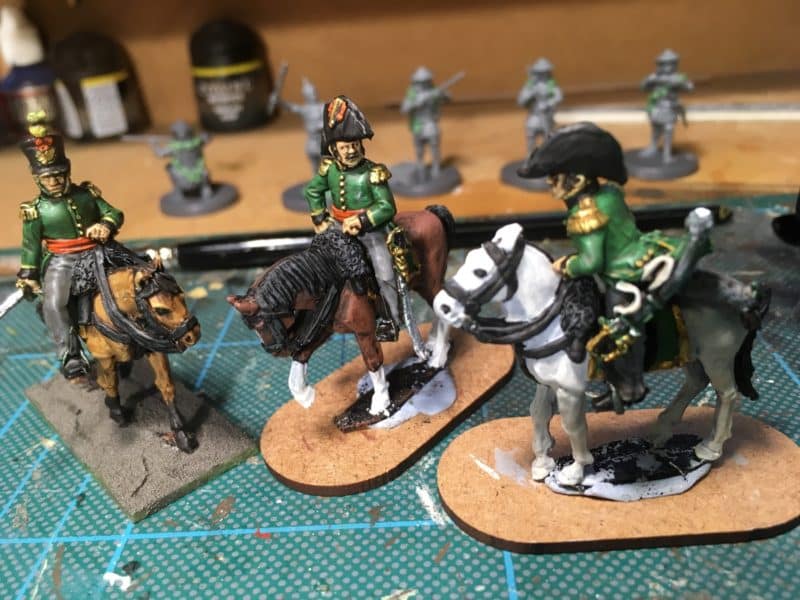 Another view of the Staff officers

I had decided that the Officer wearing the Shako would make a good Brigade Commander, whilst the Aide mounting and the Prince Bernard figure would form the command group. So the Command group would go onto a 60mm round MDF base and the lone officer would be on a 20mm x 45mm base, the size I usually use for cavalry. 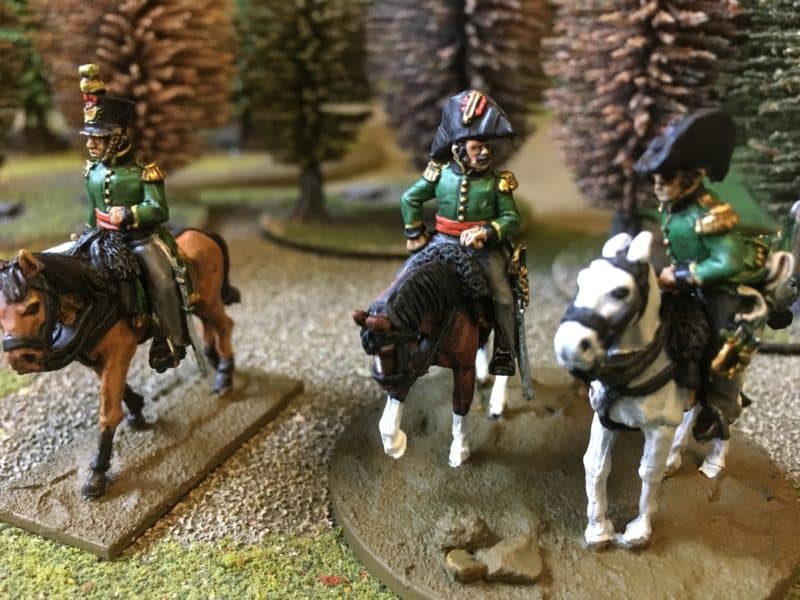 I then painted the bases with my standard basing colour – Dehli Bazaar emulsion and dry brushed this with an Iraqi Sand mix to get highlights. A bit of scatter was added and of course some tufts and flowers to finish. 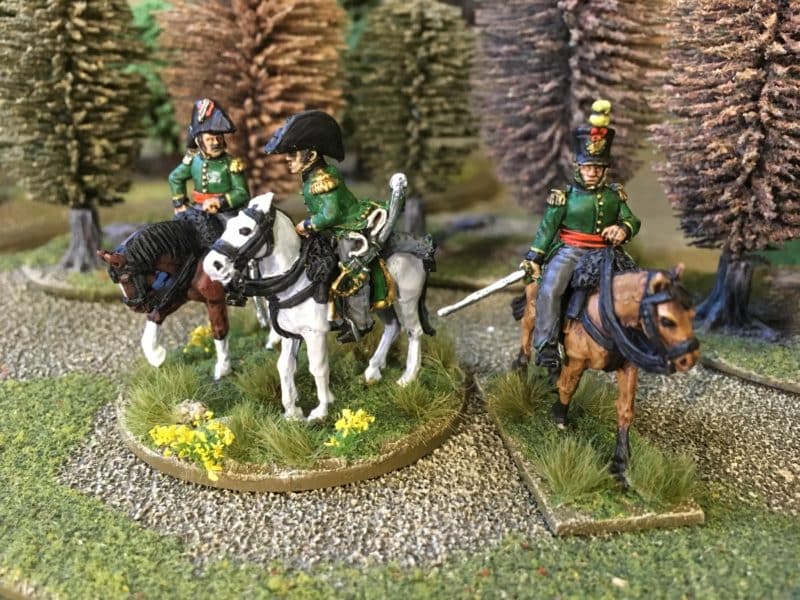 The Completed Command for the Nassau

I now have a command staff for my Nassau Brigade!

As always, all of the paints, tools and basing products are available from my shop, post free at the time of writing:

The models are only available direct from the Perry’s web site here: