This past Saturday I attended the ‘Bingham Napoleonic Days’ event with the NG13 Wargamers. We were putting on a demo game and for this year, Andy Callan had found a nice set of scenarios that had been published in the ‘Wargames, Soldiers and Strategy’ Magazine. The articles, written by Rob Harper, detailed how General Lecourbe was able to conduct a rearguard defence of Eastern France against the invading Austrian Army. As well as giving a nice overview to the campaign, Harper also provided a series of linked scenarios that gamers could use to re-fight the campaign. We chose our favourite rules set ‘Black Powder’ for the battles and for the skirmish scenarios, used ‘Rules for old wargamers with short memories’, a home brew mash up written by Andy. 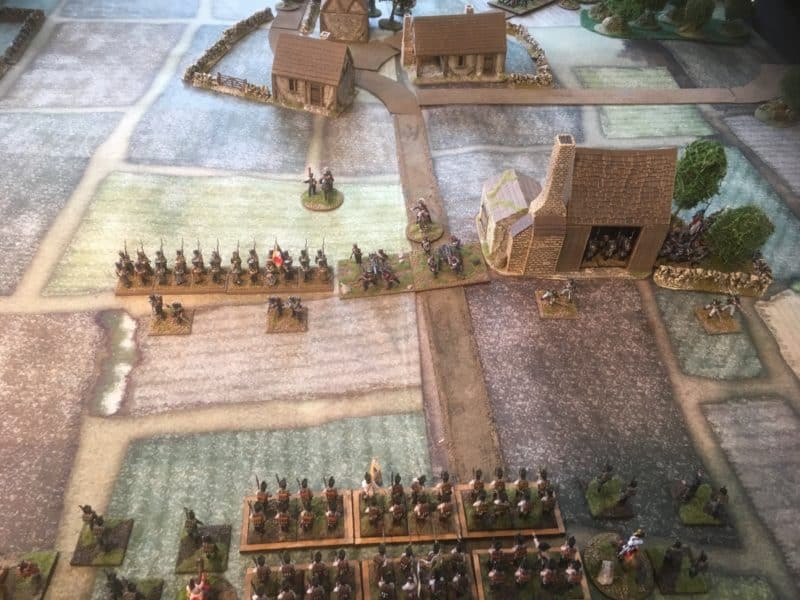 As a group, we are happy to use what ever troops that we have available in our collections to fight scenarios. We dont get too hung up on getting exactly the right regiments on the table. Indeed, as I had no Austrians to field, I took a brigade of Prussians to fight alongside their Austrian allies. It added a bit of colour to the Demo game and we were happy to point out the discrepancy to our visitors both verbally and in our briefing handout. We were playing Second Edition Black powder and the only minor rules amendments that we made were to take away the ‘Follow me’ rule from the Austians and to remove the order bonus for Columns. The Austrians had shown a remarkable lack of ambition in the actual campaign and we felt that these amendments would be enough to reflect this Austrian caution in our games. 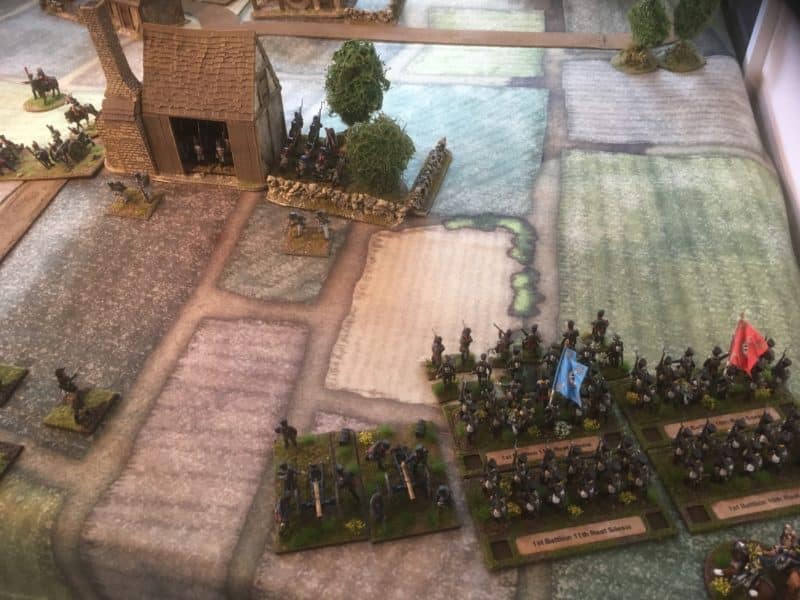 The Prussians push onto the French Right.

Andy and I took the Austrian/Prussian Alliance and Pete Harris, fought as General Lecourbe, leading the French. As usual, I was playing and trying to take pictures, so although I had plenty of pictures, they weren’t necessarily of the key moments – I was too engrossed in the game! 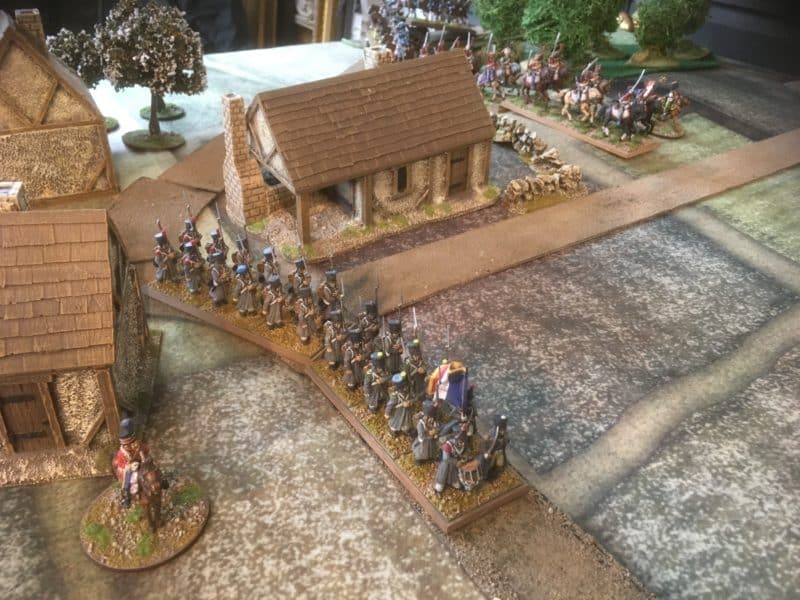 The French reinforcements arrive and move to the front.

The first battle of the series had The Austrians struggling to deploy their forces against a French force in a good defensive position in a tile factory on a hill in front of the village of Dannemarie. Both sides had reinforcements that they could bring on, the Austrians being hampered initially by the ‘traffic jam’ on the main road. The French had no such problem but they were out numbered – if the Austrians could bring their army onto the table. 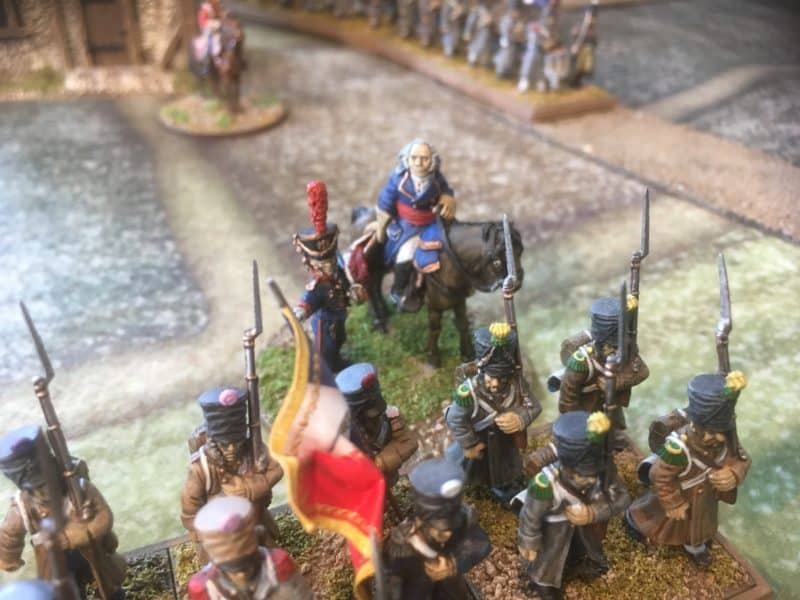 The initial part of the battle saw the French comfortably holding the Austrians in front of the Tile Factory. The Prussian detachment was able to flank the building and move to threaten the French right. Lecourbe was able to deploy his cavalry and push the Prussians into square whilst moving reinforcements to counter the threat. As the pressure built on the Tile factory the Austrians were presented with a relatively weak French right flank. All they had to do was to deploy their Cavalry brigade and bring on the extra Infantry brigade that was dawdling off the table… 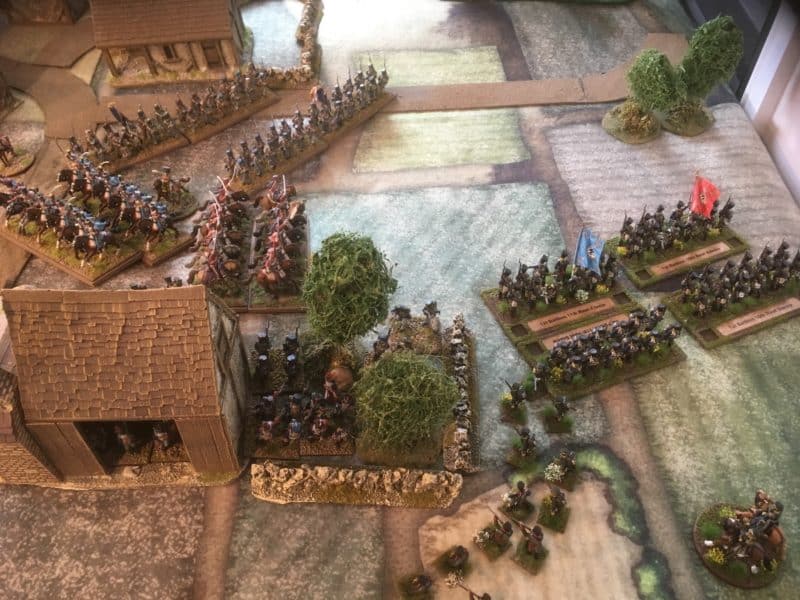 Prussians attempt to by-pass the tile factory, only to be met and contained by the French reinforcements.

The Austrian Cavalry failed in six turns to throw a command roll of 8 or less!!! Clearly, the Austrians thought that they were going to a dance, but didn’t even send the three and four pence!!! With no reinforcements to exploit the weakened flank. The French tied all of the Prussian infantry into squares and began to out-shoot them, bringing them close to breaking point. Although the Austrians did eventually manage both to deploy their cavalry and break the French Brigade defending the Tile factory, the game had reached it’s end in the allotted twelve turns. It was a tactical victory for the French who were then able to fall back in good order ready for the next battle. 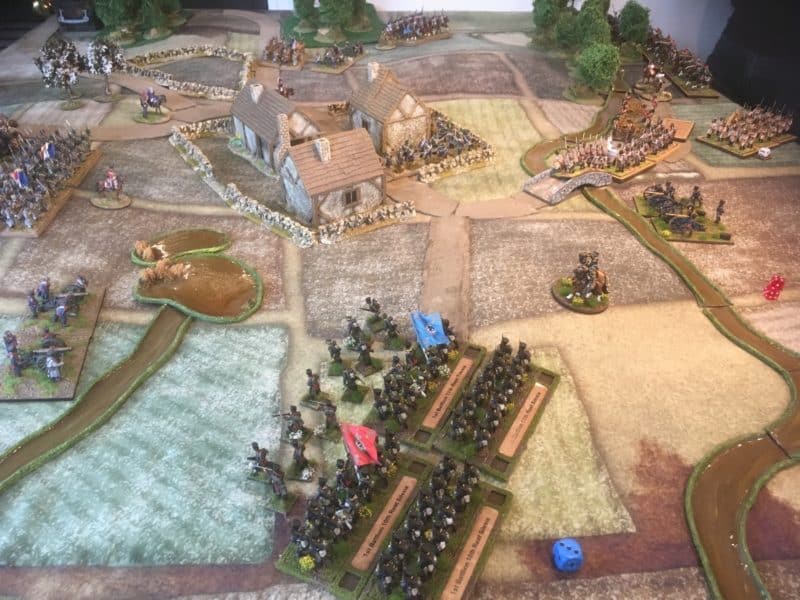 Battle Two The defence of Chavvanes-sur-L’etang. The Prussians push on!

After a bit of scenery shifting by Andy, we were ready to fight the next scenario, the defence of Chavannes-sur-L’etang. The Austrians were again partially deployed off table but this time, there was a bit more space for them to deploy and the main bulk of the army was soon threatening the French, who were deployed in and to the rear of the Village. Once again the Prussians moved aggressively forwards onto the right flank of the French. This time they by passed the village, leaving their Artillery and Austrians to deal with this threat. The initial stages of the game were dominated by 5, yes, 5 blunders during the orders phase with 4 for the Austrian/Prussian alliance and one for the French. Although not fatal for either side, the result was that the Austrians were once again slow to deploy and support the Prussian advance. The Austrian cavalry were doing their version of the Hokey Cokey – In Out- In Out of the game! 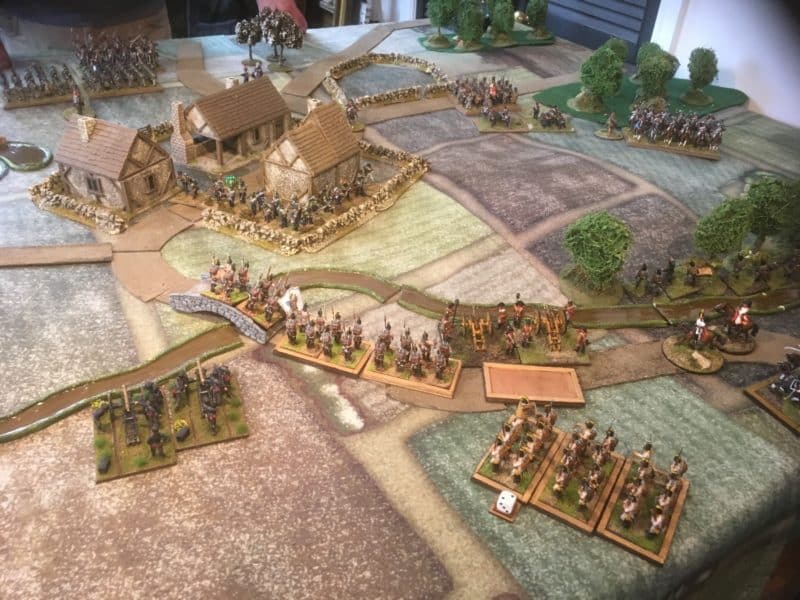 The Austrians attempt to pound the Village into submission!

Despite these tribulations and the difficulties in encountered in crossing the various streams, some progress was made by the Alliance, with a French battalion being destroyed in the village and the Prussians driving off an artillery battery on the right. Lecourbe kept his cool and was able to steady the  line. He sent a replacement batallion into the village, reinforced the right flank with an infantry battalion and sent his cavalry to hold the Austrians to the left. 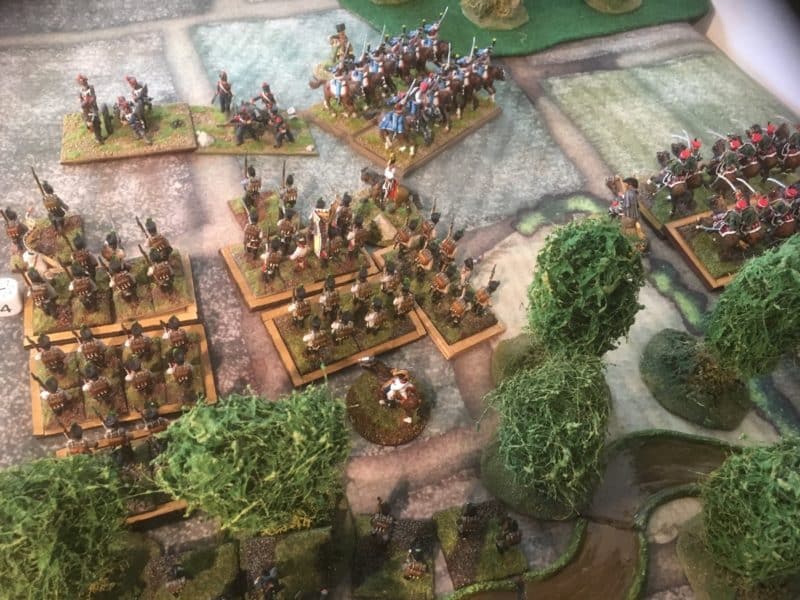 An aggressive move by the French cavalry holds the Austrians

The Prussians charged home, threatening to break yet another French battalion, but the French were able to pass their morale test, hold on and lock the Prussians in a vicious hand to hand combat that continued over the next couple of turns. Although eventually beaten back, the French had inflicted sufficient casualties on both of the Prussian battalions to shake them causing the brigade to fall back. The supporting Austrians were too late to help out and unable to exploit the weakening French right flank. Meanwhile, on the left, the Austrians tried to push through the French cavalry, only to be counter charged and were soundly beaten! The Austrian cavalry then managed, to not only fail their morale throw, but the supporting units also broke as well. The Allied advance was in tatters and the French were victorious! 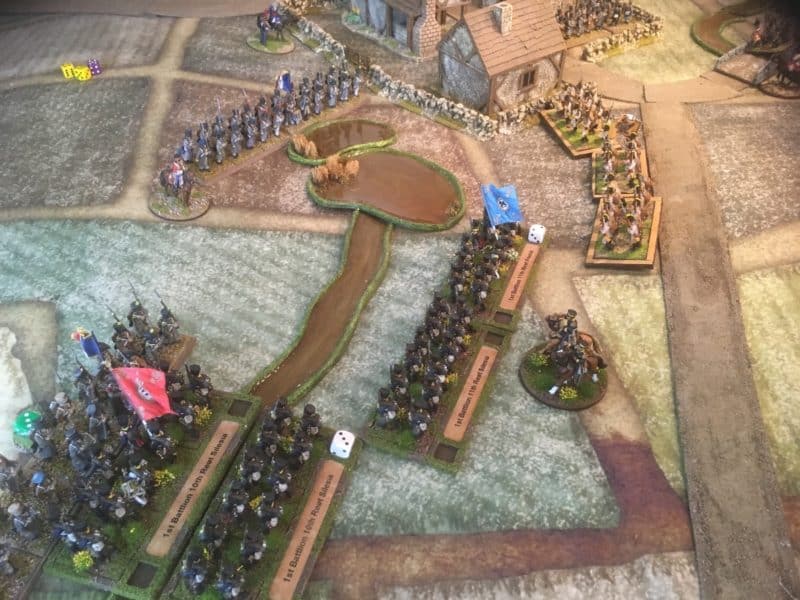 The Prussians fail to break the French in combat and are periously close to losing the brigade.

We then moved onto the third scenario which was a skirmish game. Unfortunately, I did not take pictures and so will not include it in the report. In view of the superb French performance, it was clear that Pete had done Lecourbe and France proud and won the day! In real life, Lecourbes campaign was described as a “master class in defence” which Davout thought worthy of a Marshal’s baton. Sadly, worn out by his exertions, Lecourbe died in October 1815. His name is inscribed on the Arc de Triomphe – a well deserved recognition of his achievements. 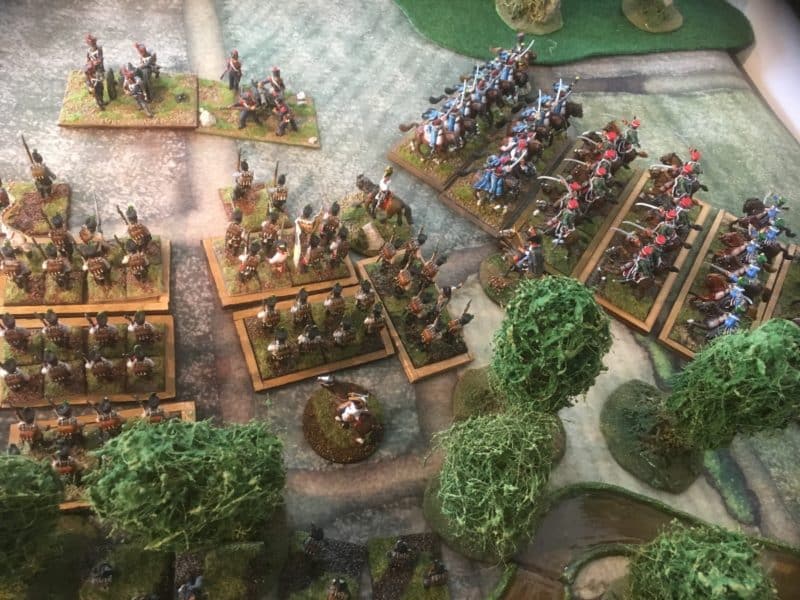 The French Cavalry charge home and are victorious! Both Austrian Cavalry regiments break as well as the supporting Austrian Infantry!

The event itself was, as always, a very pleasant and enjoyable day. My only regret was that I was so engrossed in the games that I did not attend any of the Lectures or have a chance to browse the books on sale! We had a good number of people through to watch us and to join in with the games. Wargaming isn’t really a spectator activity but I hope that those that did get a chance to roll dice and make some of the command decisions enjoyed themselves. As always, it was great to meet up with friends and like minded hobbyists. 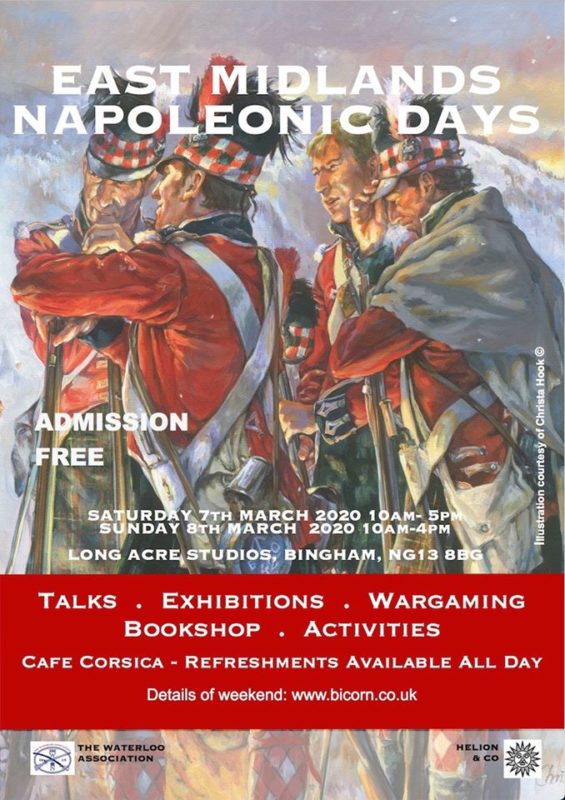 Bingham Napoleonic days Look out for the 2021 event!

We are very much looking forwards to next years event. If you are available in early March, put a note in your diary. Entry to the event is free and I know that the programme of speakers will be of the usual top quality.

Our range of Warlord Napoleonics can be seen here:

Trent Miniatures make a lovely model of General Lecourbe ( as well as a few other revolutionary Generals!). I you would like a Le Courbe to lead your army you can get him here: