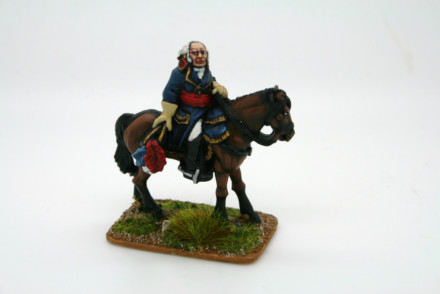 The ideal model to lead your French Revolutionary Army against the Russians!
Claude Jacques Lecourbe (22 February 1759 – 22 October 1815), born in Besançon, was a French general during the French Revolutionary and Napoleonic wars.
After having studied at a college in Poligny and in Lons-le-Saunier, he enlisted in the Regiment of Aquitaine where he served for eight years as an enlisted man. Having been promoted to corporal when the French Revolution started he became commandant of the National Guard of Ruffey-sur-Seille in 1789. He was then given command of the 7th volunteer battalion of the Jura, with which he served in the armies of the Rhine and the Nord. Having been promoted to colonel in 1791 Lecourbe distinguished himself in the battle of Fleurus. Having been promoted to brigade general in 1794 and to divisional general in 1798, he fought against Alexander Suvorov in Switzerland and distinguished himself in the Second Battle of Zurich under André Masséna.
This blister pack contains a one piece model of an officer on horseback.

Arcane Scenery and Models are proud to be authorised stockists for Trent Miniatures.

If you need glue for your models, I sell Revell Contacta Adhesive, Revell Professional polystyrene glue and a range of super glues and other adhesives. They can be found in the ‘Arcane scenery’ and ‘Glues, Fillers, Paints and Tools’ categories of my shop.