I have previously noted that I have been reading John Husseys’ splendid book, ‘Waterloo, Volume 1’ covering the Campaign of 1815. Although somewhat drier than some accounts, the book is a detailed account of the campaign and new to me, was the forensic detail in which Hussey has examined the lead up to the more familiar Battles of Ligny, Quatre Bras and of course, Waterloo. Inspired by what I had read, and motivated by the delivery of my copy of the second edition of Black powder rules, I put together a very simple scenario, very loosely based on the French attack into Belgium, prior to the main battles that were to come later.

The briefing to the players was as follows:

You are commanded to lead the advance Corps into Belgium to split the Allied and Prussian Army. Having crossed the Sambre successfully and moved past Charleroi you have encountered a small force of Prussians that are holding the route onto Brussels as well as preventing access to the Brussels – Liege road. You must push on and brush aside these defenders. Time is of the essence.

Your scouts have informed you that the Prussians consist of approximately 2 brigades of Infantry, some artillery and a small brigade of Cavalry. There are other Allied and Prussian units in the area but you are confident that it is unlikely that they will give support.

The Prussian detachment has already deployed and is barring your advance.

You have one brigade of 3 regts of Light Cavalry already in position as well as one brigade of Infantry (including one light infantry battalion). These units do not have artillery. They are deployed as you wish anywhere within 8 inches of your table edge.

As the attacker, you will have the first move.

On your turn two you may deploy an additional brigade of 4 Battalions of infantry + One Artillery piece OR a brigade of 3 regiments of Cavalry + One Artillery piece of your choice. They must enter the centre of the table through a 12″ window depending on orders thrown. All French units within 12″ of their own table edge (on or off the table) will benefit from a re roll in the case of a failed order. Blunders excepted! Your command level is 8 – no ‘pa de charge’ but column movement bonuses apply.

On turn three you may repeat the above, and so on until the end of the game.

It is not possible for the French Army to be Broken….French Brigades that are broken will Rally automatically at their table edge and any casualties reduce by one and any disorder removed. Routed units will be removed and will not return.

All French INFANTRY units will roll off disorder on a 5+.

Victory will be achieved if you can remove the Prussian barrier before turn 5….

I had anticipated the battle would be between myself, playing the Prussians and Pete Harris, playing as the French. I knew that the table that we would be playing on was 8’x 4′, so I was concerned that the scenario might favour the French, with their ability to advance so quickly in attack column.

However, a new dynamic was introduced when we were joined by a couple of extra players! So Andy Callan took control of the Prussians with no other briefing than the above and Jaz Storey-Smith took command of the advance guard of the French, with Pete commanding the reinforcements as they arrived.

I had thrown in a bit of mis information in the briefing, hinting that Allied units might be available – they would not be. 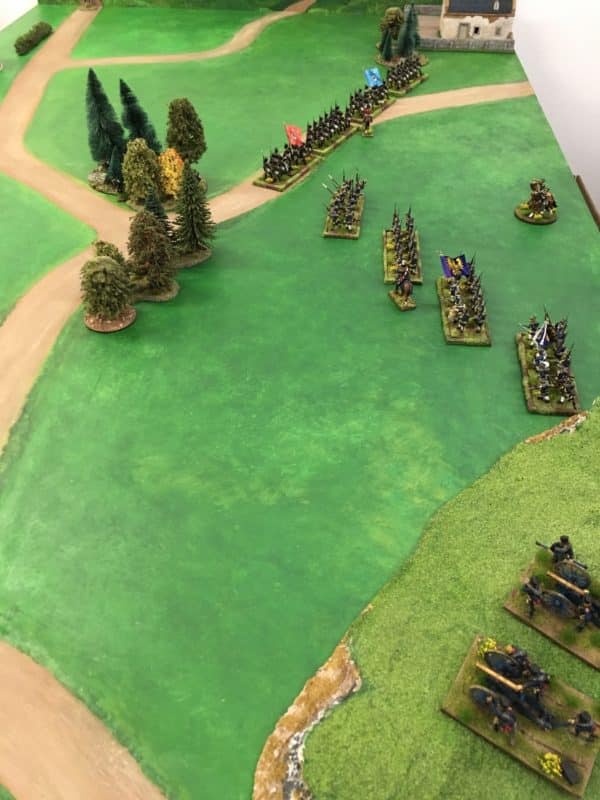 The Prussian deployment, the two Lancer regiments are to the far left of the artillery, out of camera shot.

Having seen the Prussian deployment, the French then deployed their units. The first surprise was that the French commander decided that the main threat was to the advancing flank and so deployed the entire advance column of 4 battalions of infantry and three regiments of cavalry to the far left flank facing just two regiments of Prussian Lancers. 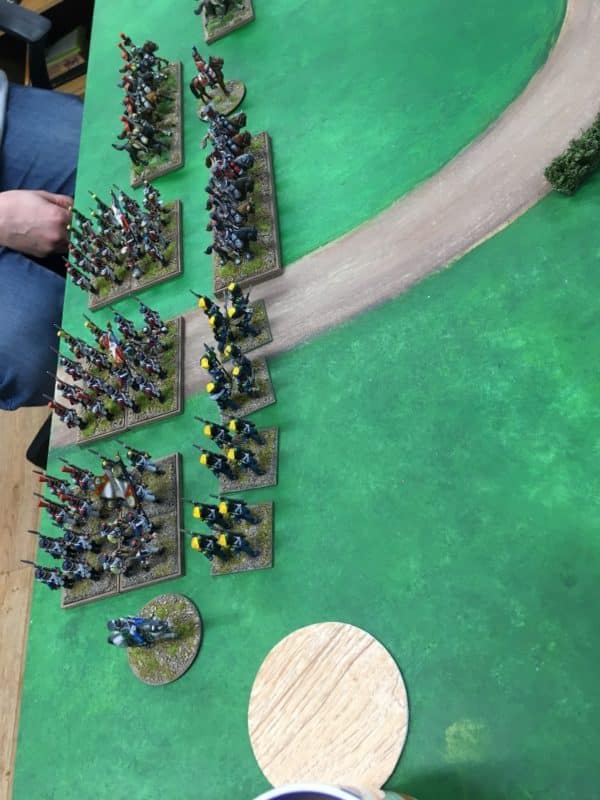 Initial French deployment – the coffee mat was not there to inhibit the move to the flank!

Turn one saw a very cautious advance by the French…It was at this point that Napoleon (well me) sent orders reminding the French that the object of the battle was to clear the Prussians from the table by turn 5. This had the effect of galvanising the Prussians into action and their Lancers charged the French Light cavalry. 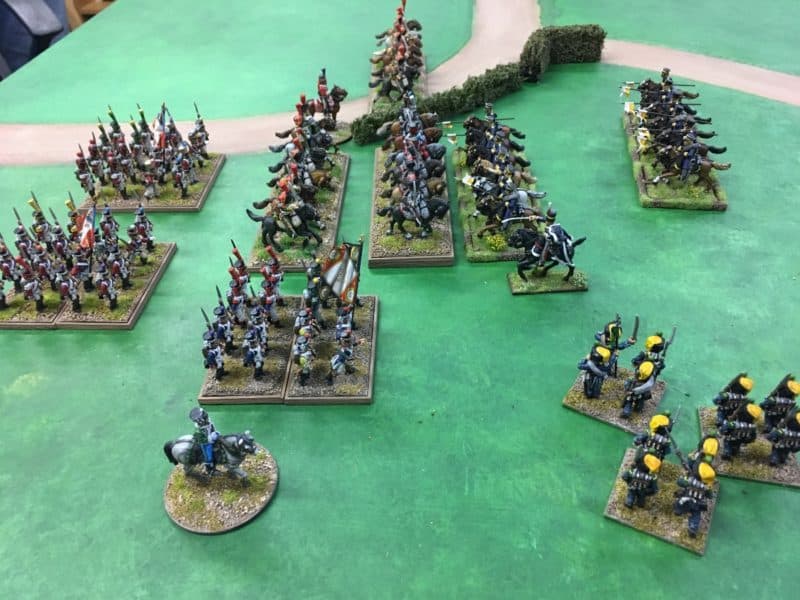 The Lancers charge was devastating! The first unit of French cavalry lost the combat and failed their morale check routing from the table. One of the supporting units also routed and the final unit was shaken by the sweeping advance that followed. So turn one and the French infantry were isolated on the flank, the French Cavalry  had run away and the Prussian lancers were confidently holding the flank! 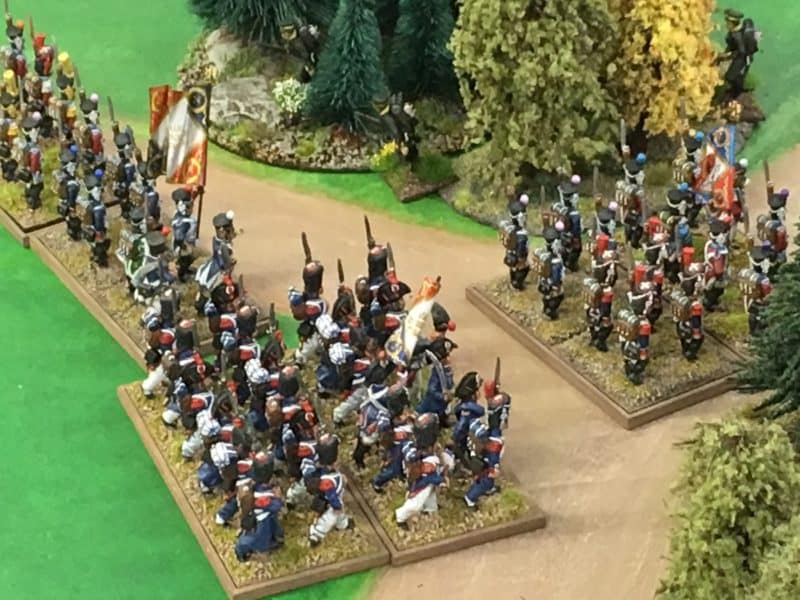 There’s Jaeger in those woods!

Turn Two and the French brought on the next brigade which advanced in the centre toward the woods. The French Brigade on the Flank, continued with it’s slow advance but perhaps stunned by the loss of their Cavalry made little progress, being pushed into square by those pesky Prussian Lancers. The Prussians, in reply simply blocked the pass engaging in combat with the leading French unit. 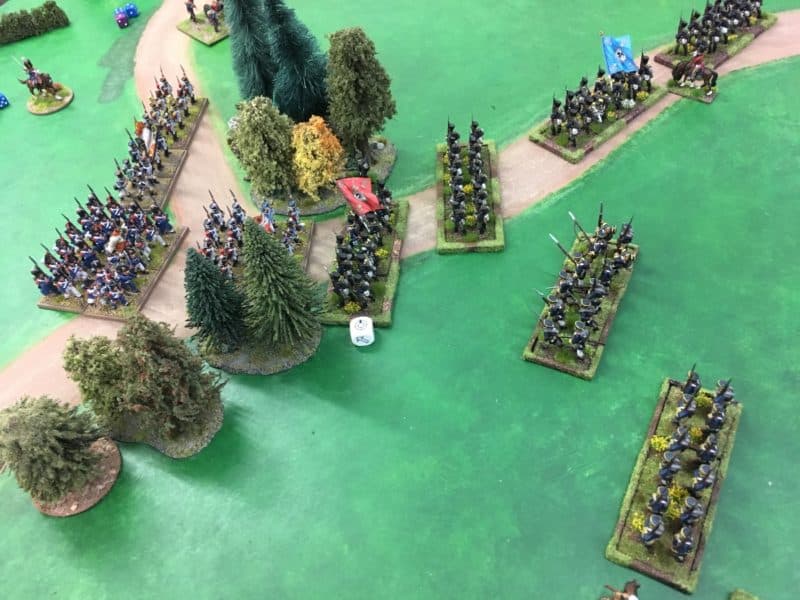 Prussians hold the road to Brussels!

Turn three saw the French bring on a brigade of Cavalry to try and put pressure on the Prussian right Flank. However, despite orders to the contrary, the cavalry appeared to be in no great hurry… In the centre, the deadlock at the road junction continued with the Prussians holding firm and the French throwing more units into trying to dislodge the small unit of Jaegers in cover and force the road through the trees. On the left, the French continued with a rather ineffective advance whilst the Prussian Lancers smugly looked on! The Prussians were happy to hold, whilst in the French camp there was growing disquiet at the lack of progress. 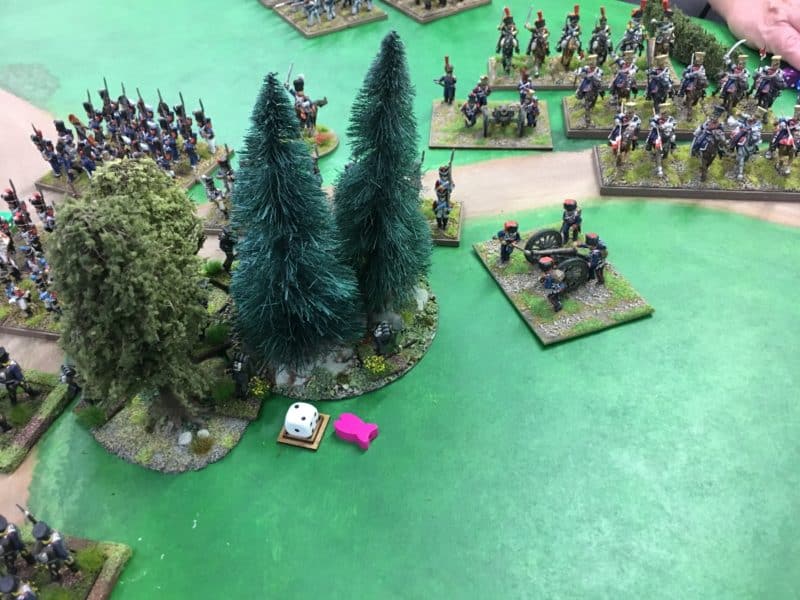 Turn Four and at last the French, in some desperation brought on the next brigade and force marched past the woods to threaten the Prussian Landwehr. The cavalry had moved out to the flank, pushing the Prussian infantry there into square but deadlock remained at the woods! Still the French on the left were unable to move! 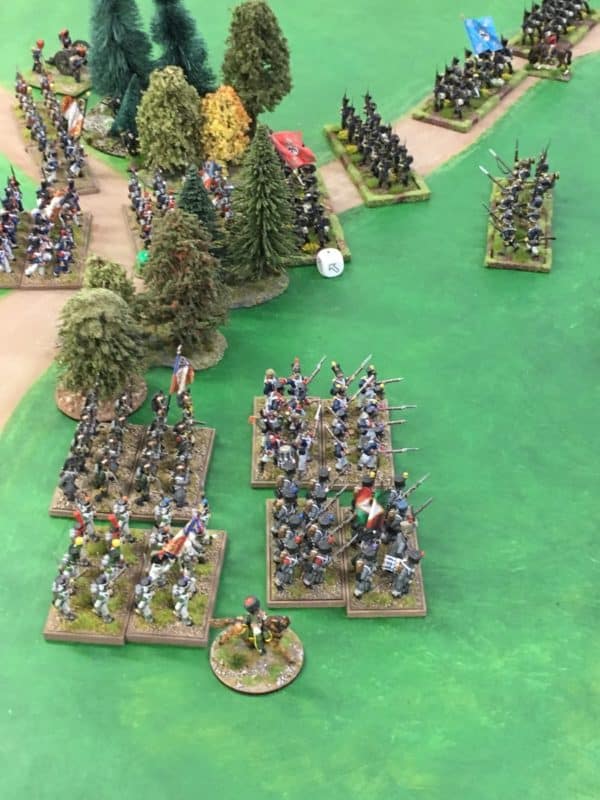 The Prussians were now feeling quite confident of winning the game, if not the battle and the French morale was somewhat shaky. 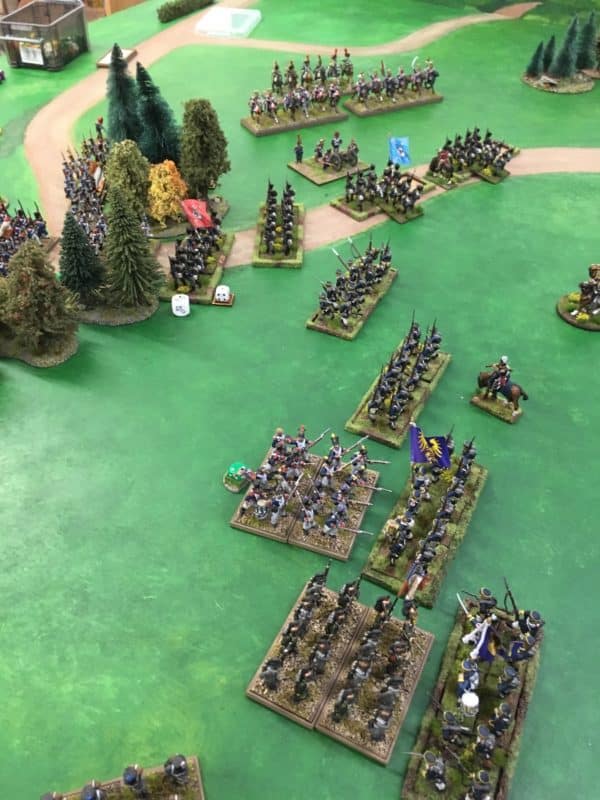 At last, the French engage the Prussian

Turn 5. At last the French columns closed with the Prussian Infantry Line in the centre and although casualties were heavy on both sides the Prussians were now under pressure. With the right flank tied up with cavalry and now facing artillery at close range, something would have to give. However, despite numerous rounds of close combat the Prussians at the road held on, stopping the advance here. As to the left flank, well the Prussian Lancers were still in the ascendancy whilst the French infantry here were unable to progress. 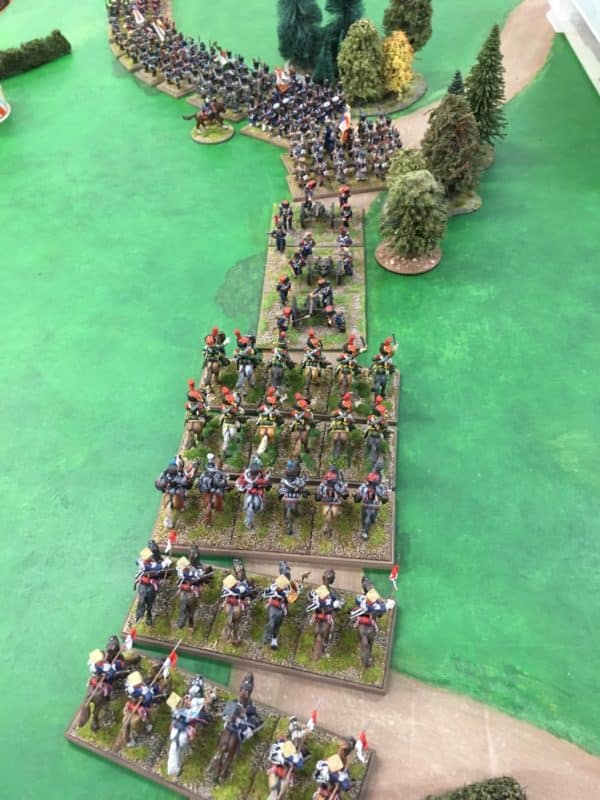 The French march to Ligny!

It was a tactical victory for the Prussians! The French would march on but somewhat delayed by a stout Prussian defence.

My concern was that with the quick movement rates in Black Powder, the game would have been over by turn three. However, a combination of some timid decision making by the French Commanders combined with some unlucky orders rolls meant the it was only turn in turn five that the French really managed to push though and engage the Prussian infantry.

With hind sight, the French were overly concerned with the brigade of Prussian lancers on the left (Although to be fair – they did soundly beat the French lights in combat) and taking the narrow road through the woods was asking for trouble. Had they bypassed them as they eventually did so, the French would have engaged the Prussian far more quickly than they actually did.

That all said, there were two other factors that made the battle more difficult for the French. The commanders natural caution to preserve their forces as with ‘normal’ battles meant that perhaps they could have taken more risks with their troops. There were plenty of reinforcements available and they couldn’t be broken as an army, whereas the Prussians would have to accumulate any casualties and could be broken.The second factor was the time limit and the umpire (me!)goading them to go faster! this added to the pressure and lead to some errors – forgetting to give units orders, forgetting to rally off casualties and even forgetting to order units to fire, all in the ‘heat’ of battle!

I think that the players enjoyed a different type of battle. The Prussian commander went home happy and I certainly had some fun. May be next time for the French!

Just a reminder that orders from Arcane Scenery are post free to most worldwide destinations!

You can visit the shop here:

If you would like a copy of Black Powder or any item from the Warlord Napoleonic range, we are offering 10% off plus free delivery worldwide for the next week until 19/10/2018. Enter black2 into the coupon code as you go through checkout – click here for Black Powder: