Over the last couple of weeks my blog has been focused on the Demo game that I was a part of at the Bingham Napoleonic days. I thought that this week, I would round up this very enjoyable occasion by giving a few details about the event and who else and what else was there. It’s a bit of a ‘bolting the stable door’ blog but if you are interested in Napoleonic history, it’s a nice little event to attend and assuming that it goes ahead next year ( I hope so) – put it into your diary now. 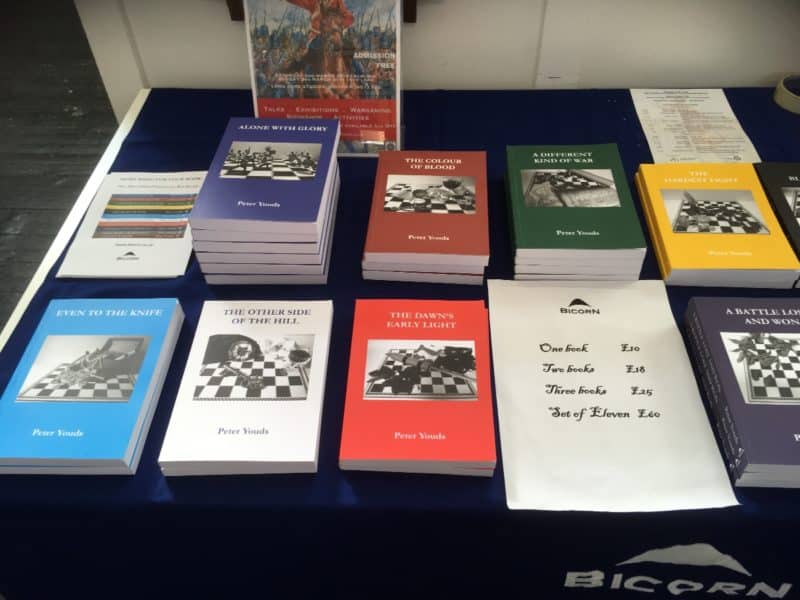 A selection of Peter’s books

The event is organised by local author Peter Youds. Peter has written a number of novels ( 10 so far!), set initially in the Peninsular War, in his series, ‘The Ties of Blood’. He thought that it would be a bit of fun to organise a small event at the end of February/beginning of March to celebrate the Napoleonic period and it’s rich history. He gathered together some of his like minded colleagues and the first event was held three years ago. The East Midlands Napoleonic Days weekend takes place at Long Acre Studios, Bingham, Nottinghamshire. The building is the former drill-hall of the South Notts Hussars and provides a most suitable venue for the event. 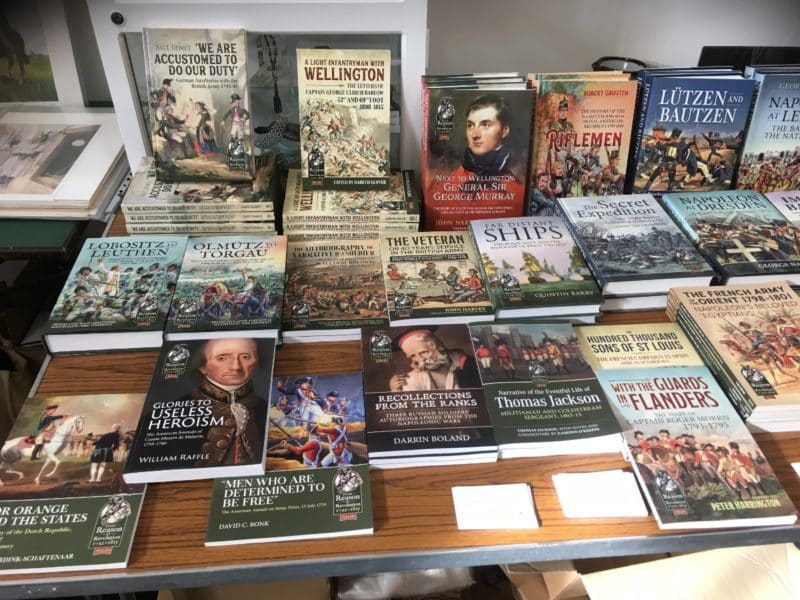 A good selection of Helion books available – as were some of the authors!

The event is steadily growing and this year, with the help of Helion Books, there was a full program of guest speakers. Familiar names included Carole Divall and Andrew Bamford along with of course, Peter Youds himself. Other speakers included Mark Thomson, Mick Crumplin, Rod Griffiths, Paul Chamberlain, Michael Kirby and Edward Hammond. 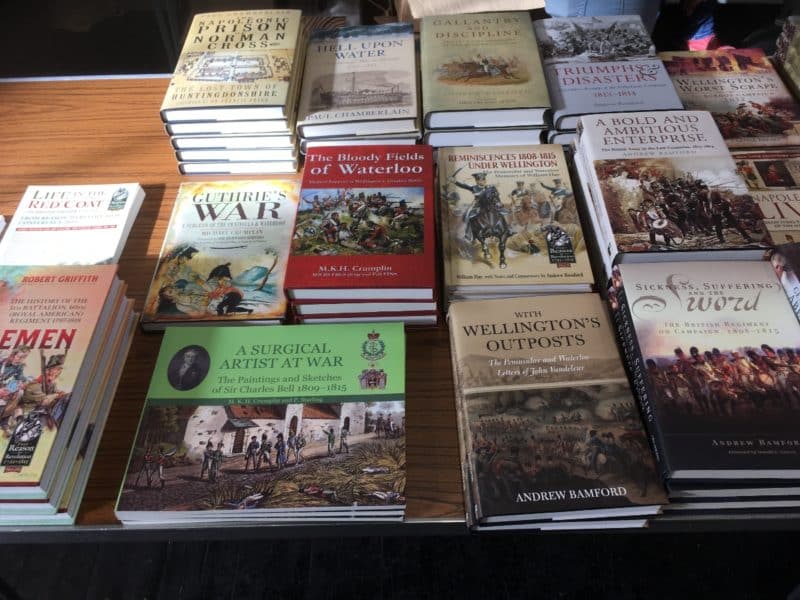 Spot The Author! – Another selection of titles available.

Also attending the event, was the very talented Christa Hook. If you have used Osprey books as a painting reference, particularly if painting British Napoleonics, you may well have used Christa’s paintings as a reference. I certainly have, although the name hadn’t registered until the week before the event. I was painting a Warlord Games 95th rifleman and I realised that the painting that I was using as a reference was by Christa! 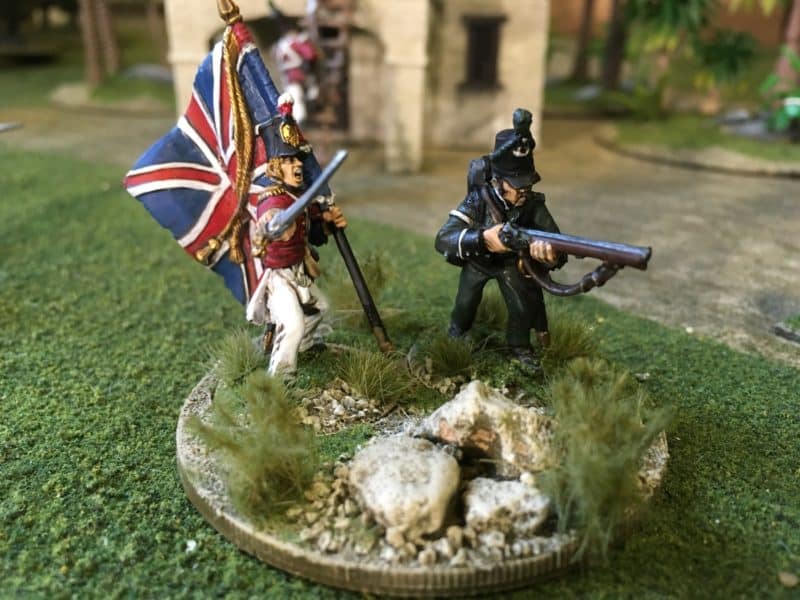 My attempt at painting a 95th Rifleman 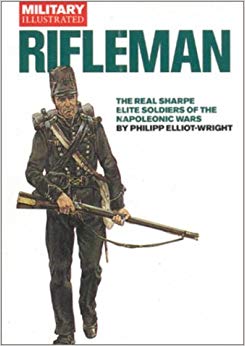 Christa Hooks Cover art – no doubt who is the more talented painter!

Christa had brought a selection of paintings to display and sell, as well as copies of her book ‘Far in Advance’ a beautifully illustrated book of the Peninsular war. 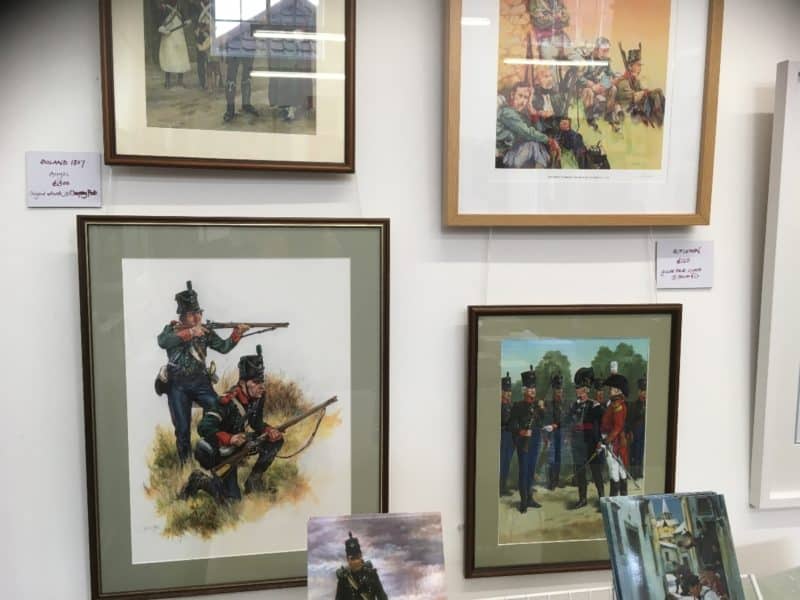 Just a small selection of Christa Hooks work on display.

So with a full program of speakers in one hall, a selection of literature and art work in the gallery, Café Corsica, a pop up café, selling delicious home made cakes, tea coffee sandwiches and freshly made bacon cobs ( bread rolls, to you Southerners…) what more could you want? Oh yes, in the back room, the NG13 wargamers were putting on a battle based on an engagement from the Peninsular war that occurred at Foz d’ Arouce and described in Peter Youlds book, ‘the Hardest fight’. 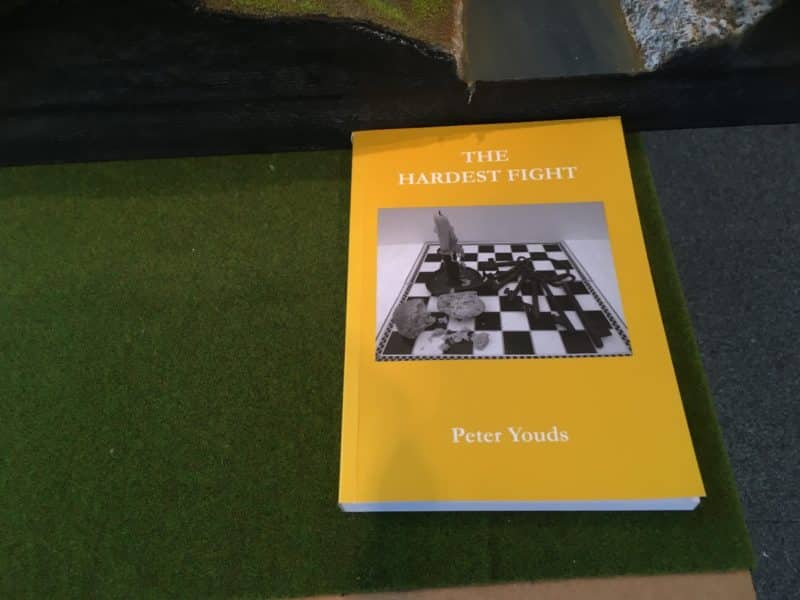 The Hardest Fight by Peter Youlds

A full battle report is in last weeks blog but it is worth mentioning again that the board was scratch built by Peter Harris of the NG13 wargamers with assistance from Jaz Storey- Smith. 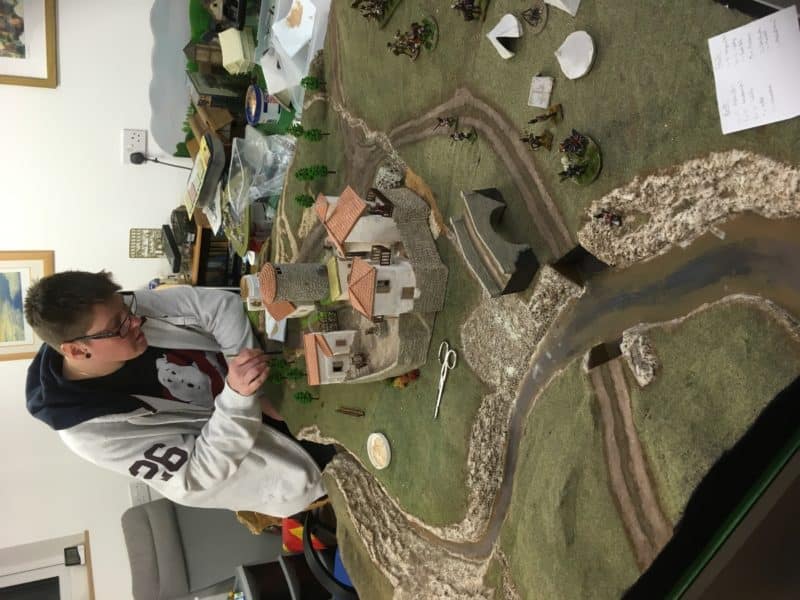 Jaz busy painting the board under Petes direction!

Having spent all day Saturday playing our Demo game, I returned on Sunday to listen to some of the speakers. I particularly wanted to hear Rob Griffiths talking about the 5/60th rifles. I had treated myself to one of Christa’s paintings of these guys and I wanted to know more about them. Rob’s talk was so enlightening, I purchased a signed copy of his book! 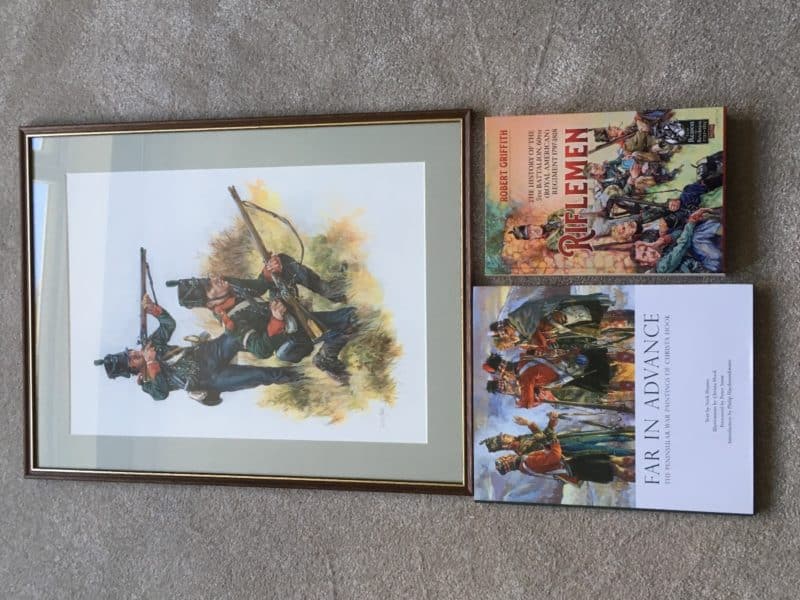 I spent a bit more than I intended to but I am very pleased with my haul!

I should also mention that as well as speaking,  Michael Kirby had put on a ‘Hands on History’ demo in the back room that was a superb introduction to the period for both kids and adults. I regret that my roving reporter skills are so poor and that I have no pictures of the display that he had assembled. Another speaker, Edward Hammond was in full Napoleonic French Infantry dress. I had the pleasure to watch Christa Hook sketch him and produce a superb likeness as I stood and watched. Such talent! Again, I was so star struck that I forgot to record the results! 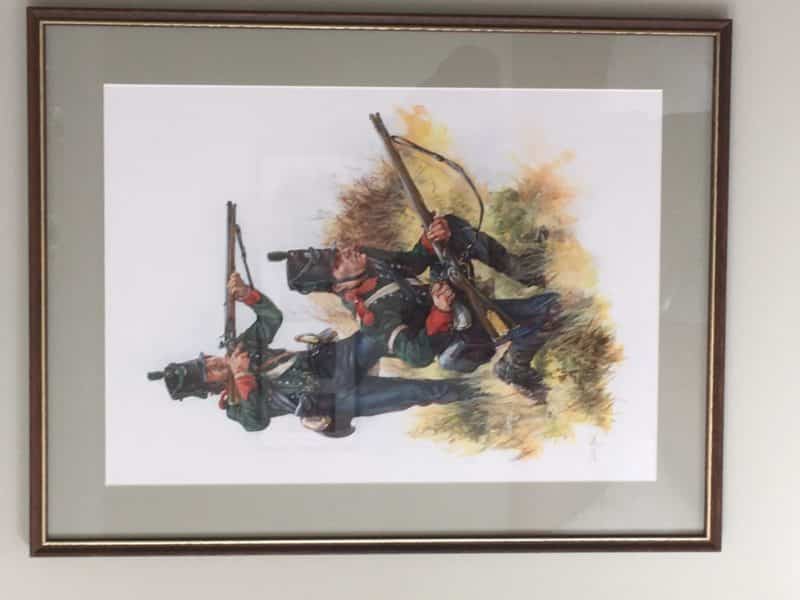 Christa Hooks painting now has pride of place in the lounge!

In conclusion, I spent a very happy weekend at the event and I am very grateful to Peter for organising such a pleasant experience. If you are in the area next year ( The event can coincide with Hammerhead at Newark, just down the road) and you are at all interested in Napoleonic’s, I would urge you to make the effort to attend – it’s free! All you will spend is your time….unless like me you are tempted by the books and paintings available. Oh and the cakes…

As always a link to the Arcane Scenery and Models on line shop. We currently post all orders free to most worldwide locations:

Here is a link to Peter Youds Bicorn Books site.

You can see and purchase more of Christa Hooks Paintings, book and Art Work here:

Footnote: In case you haven’t noticed, I am having problems with aligning some of my pictures. It seems that if you view them on a Tablet or phone they are aligned correctly but on a desk top, they are set at 90 degrees. I will be seeking some technical help to resolve this!