Our small war games group have started to mix things up a bit recently. The winter weather has meant that some of the venues are not particularly comfortable, as they are in cold garages. At our age, cold bones are a bad idea. So we have started to play board games in the comfort of the house to give ourselves a break from ‘traditional wargaming’ every other week or so. 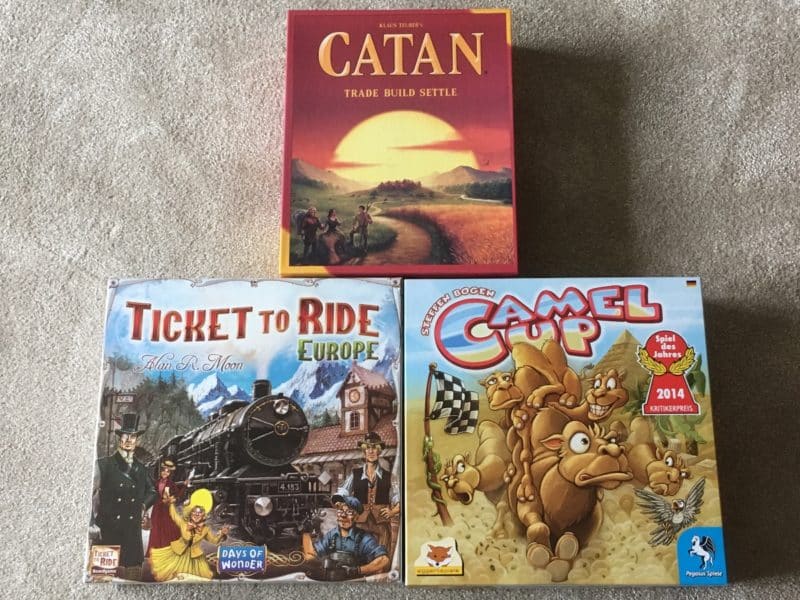 Catan, Ticket to ride and Camel Up!

Initially, we started to play some of the more ‘recent’ games that are popular on the board games scene. ‘Ticket to ride’, ‘Settlers of Catan’ and ‘Camel Up’ are most enjoyable. It is fairly easy to pick up the rules but the games are cleverly designed with a great deal of depth to them. 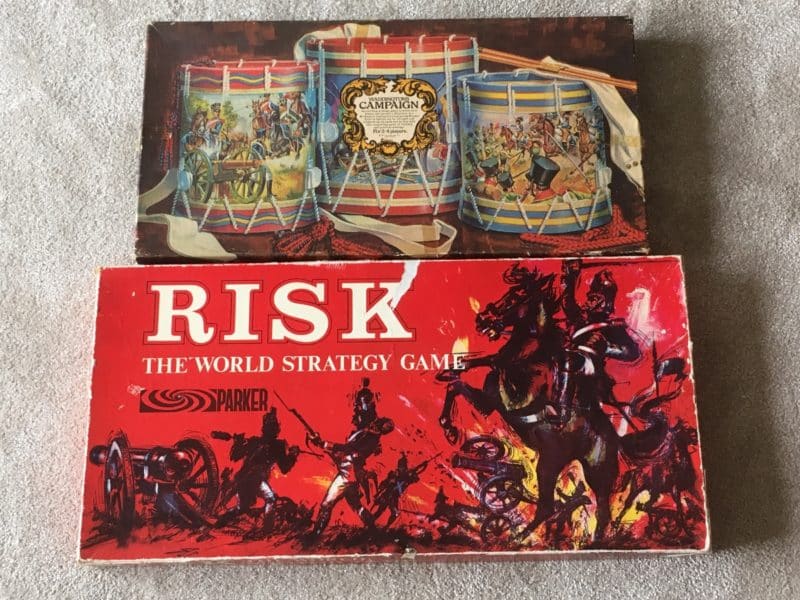 That then prompted us to dig out some of the games that we played in our Youth. Risk was the first, closely followed by Campaign. Two classic games that I spent hours playing as a teenager. I then suggested a game that I played with my kids and had great fun with. It was the closest that I got to involving my children into wargaming – ‘Space Crusade’! 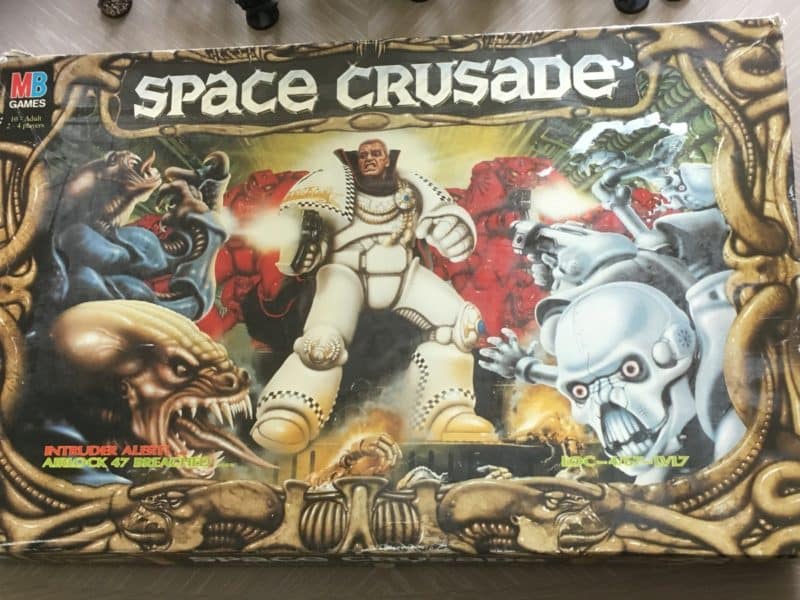 For two of the group, Space crusade was a new experience, as was the idea of gaming with Science Fiction figures. However, the game is brilliantly designed and soon had them absorbed in the game play. In fact, the game did what it was supposed to do when initially released. It fired up their imagination and we were soon all talking about how we could customise it and have our own Space Marine Chapters and perhaps designing different versions of the board. Of course it is also classic ‘Granddad material’ to play with the grand children once they reach about 8 or 9. Granddad will of course be the Alien player, springing nasty surprises on the kids, just like we did with our own children. I can still remember the squeals as a Gene stealer appeared as a result of a Alien Event card being turned over! Happy days! 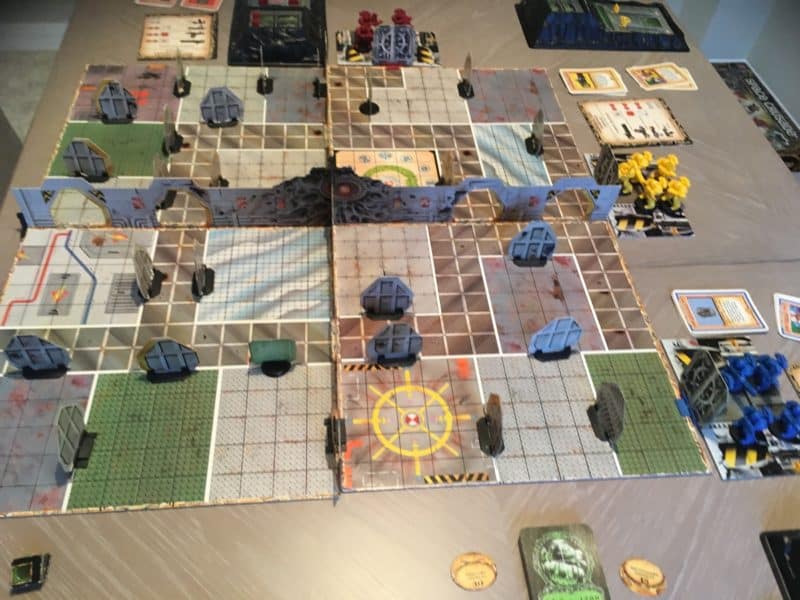 Space Crusade Board set up.

The game takes a bit of time to set up, about 20 minutes or so but once done so, the game play is very smooth, with each marine player taking it in turn to move onto the board. The marine players are in competition with each other to achieve a mission but can of course co operate against the Alien player. The Alien player has a variety of troops at his disposal and deploys them onto the board, initially as ‘blip tokens’. It is only when a Space marine has line of sight on the token that he will know what he is facing! 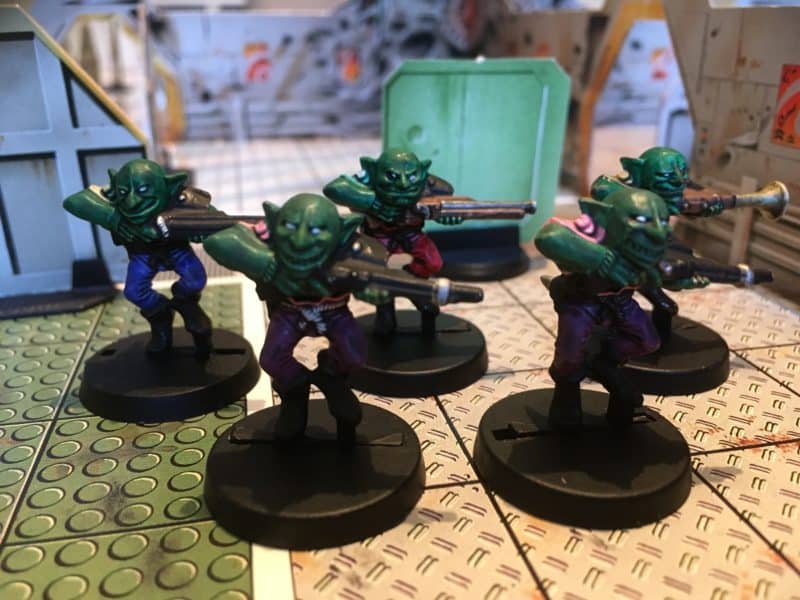 Gretchin are at the bottom of the Alien food chain. They are numerous and in the main, ineffective – but you never know when they will get a lucky shot off! 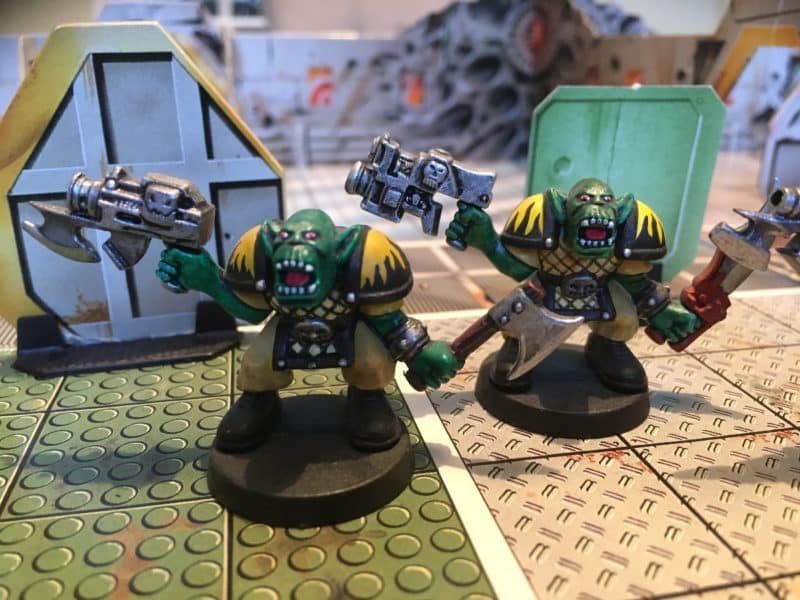 Next up are the Space orks. A bit tougher to kill and dangerous in combat. 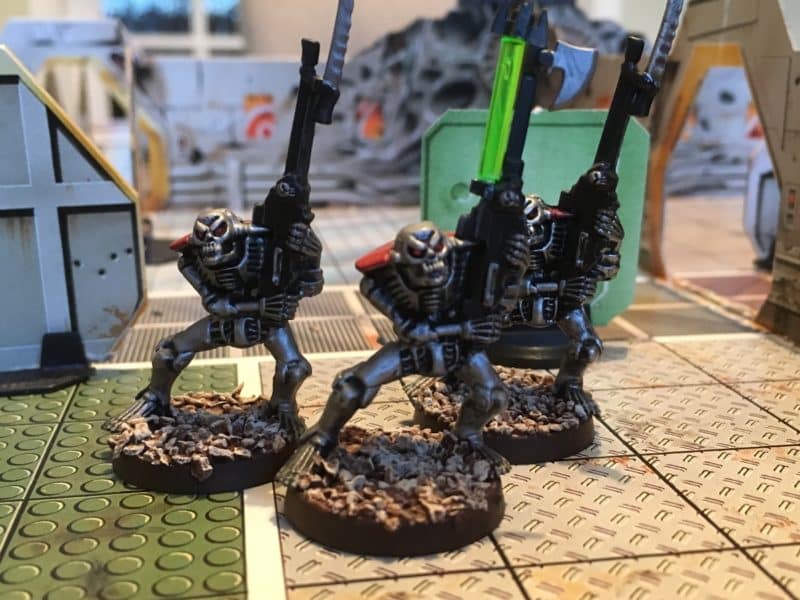 The Andriods pack quite a punch. They are slow to move but tough to kill and are more than capable of taking out a standard Space marine. 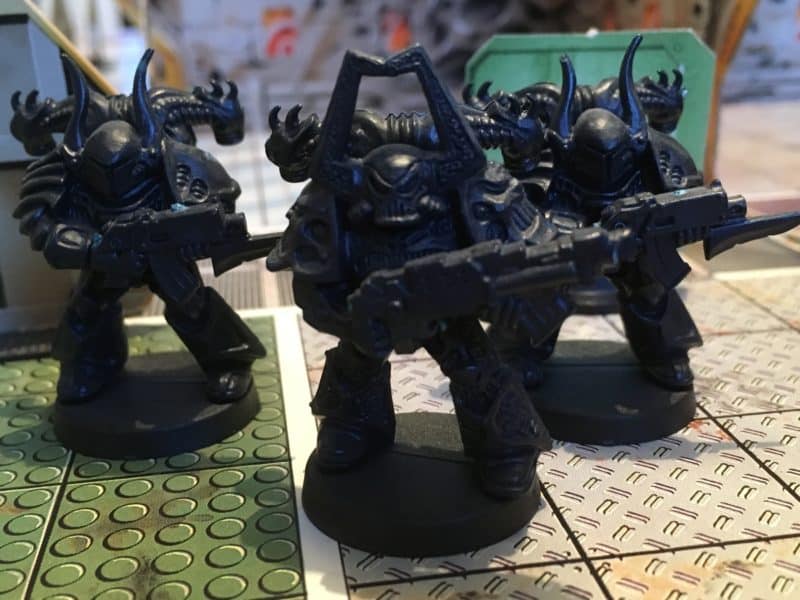 The Chaos Space marines are the Bad Guys. Not quite as tough as Standard marines but dangerous if they get the first shot off. 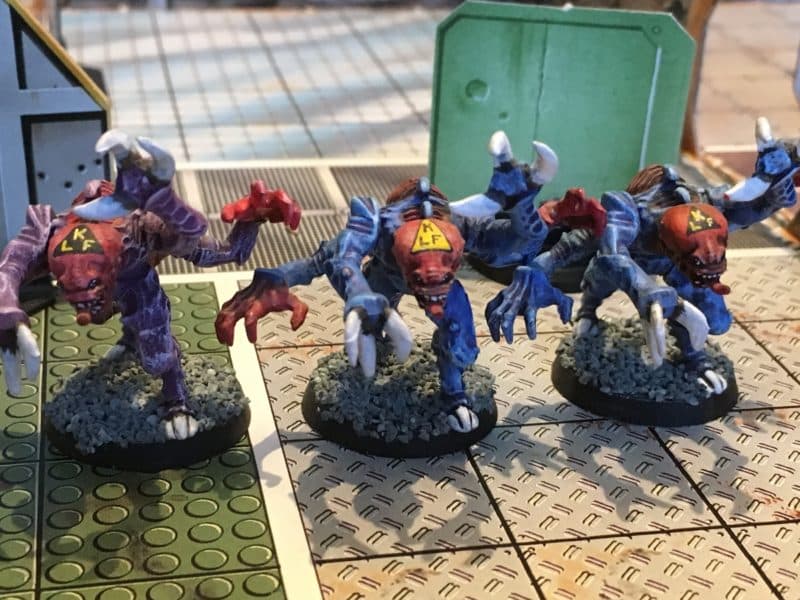 Gene Stealers from the Kult of the Living Flesh!

The gene stealers only appear on the turn of an Alien Event card. They are fast and vicious and can even badly damage a Space Marine Captain in their hit and run attacks. I painted these figures for Space Hulk – another classic game. They are from my Gene Stealer cult, the Kult of the Living Flesh, or KLF – guess what I was listening to at the time…. 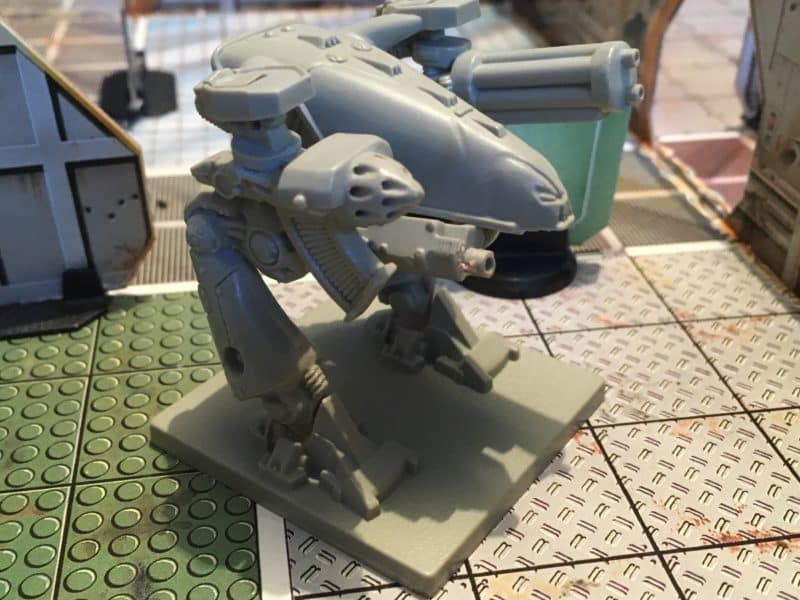 The Alien Chaos Dreadnought is perhaps the toughest character on the board, excepting the Space Marine Captains. When he appears, you better take cover and come up with a good plan of attack! 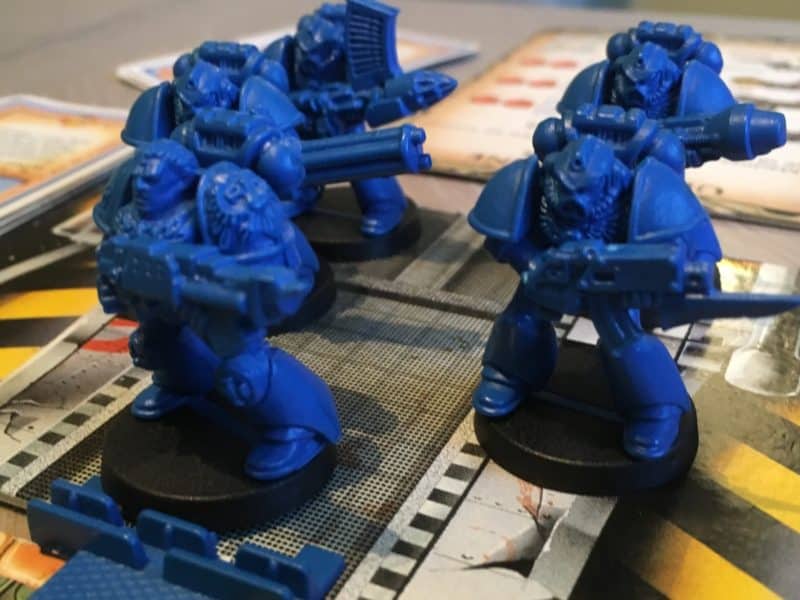 The Ultramarines are ready to board the Space Hulk.

The Space Marines in the game are equipped with some very hard hitting weaponry that will take down most of the aliens that they will face. The Captain has 6 lives or wounds, so he is quite tough. In addition, the marines have a number of equipment upgrades, that if played at the correct time, will get them out of trouble or take down that cursed Dreadnought!

We have now added Space Crusade into our portfolio of games to play when we meet. I suspect that we will work our way through the mission book! Playing board games through the winter has been a great way to keep the group together and keep us gaming. It has also been a welcome change from our usual activities and sometimes a change is as good as a rest. We will still keep wargaming and as summer approaches, the campaign season will start!

Space Crusade is long OOP so you will have to resort to eBay to obtain a copy, although the price is pretty steep these days. Better still, add it to your list and check out the local charity shops or car boot sales – you may just get lucky!

For all your other gaming needs, particularly when it comes to wargaming, painting and modeling, check out our shop. We send post free to most worldwide locations at the time of writing!