You can tell that I am struggling to get anything finished by the title of this weeks blog. It’s been one of those busy fortnights where my painting and modelling has had to take a back seat to the other things in life. Mind you I did manage a Black powder game last Thursday, during which I was comprehensively thrashed by my opponent, Mr Grant. I wished that I had taken pictures of the game just to remind me of how one over confident move can end in disaster. 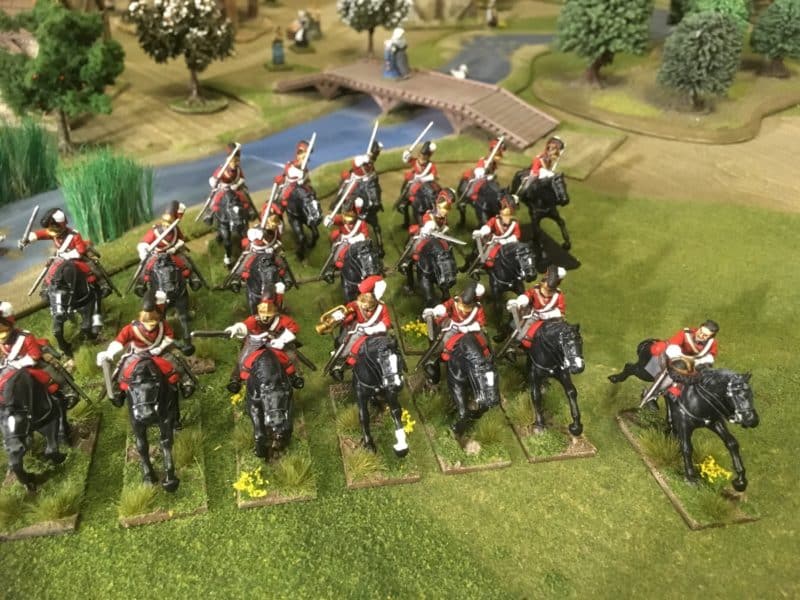 I had charged a regiment of Cuirassiers with two regiments (a brigade) of British household cavalry. The combat went very badly and both of the British regiments were pushed back leaving the Cuirassiers nicely positioned behind a brigade of three battalions of my British infantry within initiative charge move… The brigade was wiped out as they lost the one sided combat and then failed their morale tests. ‘Game over, man’ as Hicks or Hudson would have said! In future, if I have a cavalry regiment positioned to protect a flank, maybe I’ll think twice before committing it to an attack and leaving the flank so exposed! 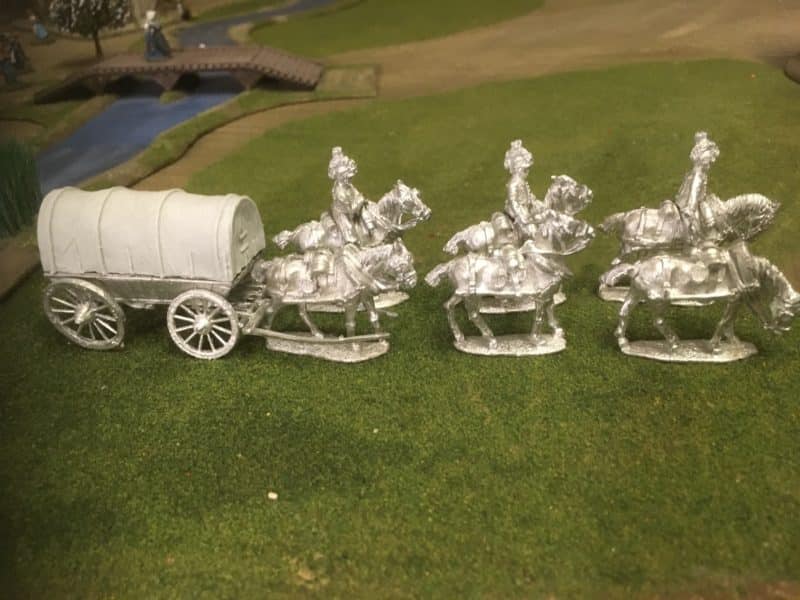 So back to the work bench. I had started work on a Perry’s British ammunition wagon. As usual, the sculpting, poses and detail on the model is superb and everything that you would expect from the Perry’s. However, the casting quality was not so good. I expect to do some cleaning up when starting a model but the amount required on this piece was considerable. In fact, after two evenings scraping and filing, the model is still not ready for priming. The annoying thing is that in cleaning up the casting, I have inevitably spoilt some of the lovely detail – the wheels and horses were particularly poor. The up shot was that I have put the wagon aside and started another model. I will get back to it when I’m in the mood for some more filing…. 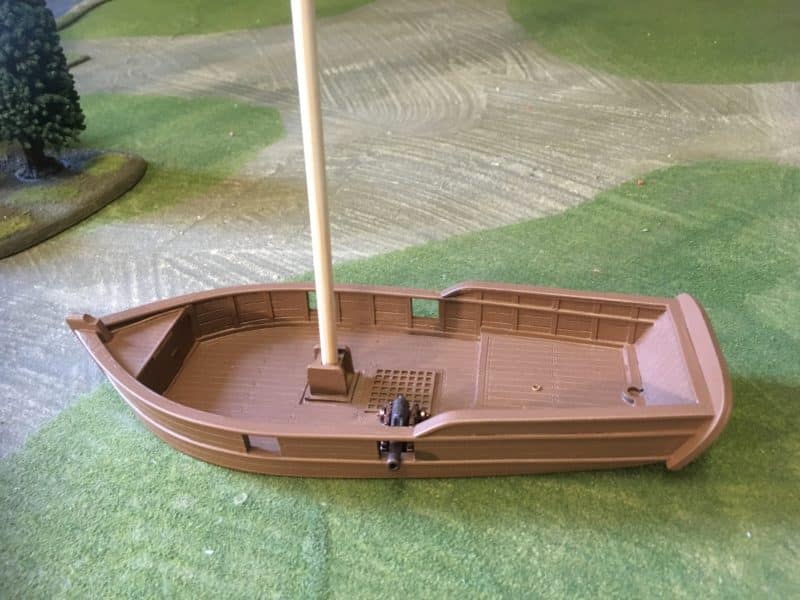 My next project – a small loop for naval engagements.

No such problems with the resin ship that I purchased from the last Partizan show. I have managed to loose the name of the company from whom I bought the model – I will find it and include it in a future blog or edit this one. The model is worth recommending! Once I had washed the model down using soap & water, I primed it with Army painter brown as you can see. 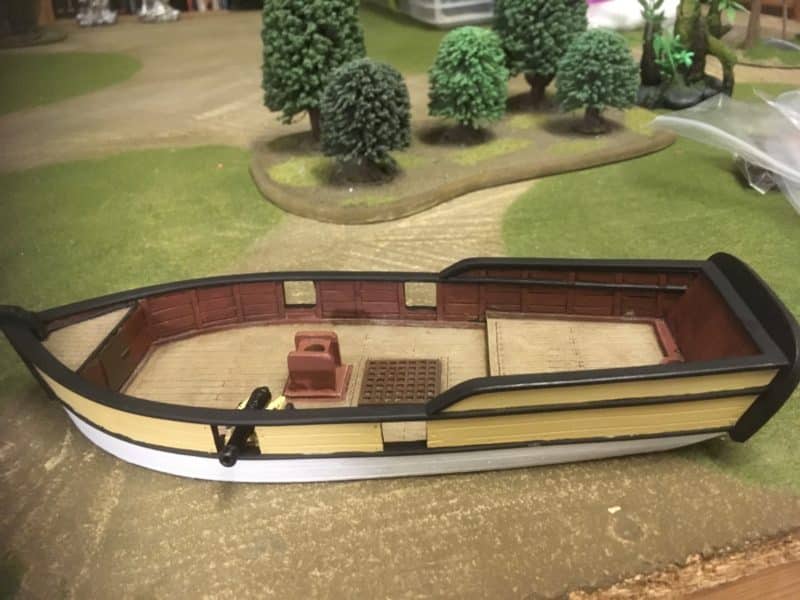 The next task was to paint her. I used Vallejo paints; Mahogany Brown 70846 for the interior woodwork, 310 Old wood for the deck, Biege 70917 for the upper hull, Off white 70820 for the lower hull and Black 70950 for the trim etc. I gave the interior, including the deck, a wash with army painter dark tone and then dry brushed the deck only with 310 old wood and then a further coat of 50/50 old wood 310/Iraqi Sand. The grating was painted in Chocolate brown and washed in Dark tone. I painted the stern panel in 70961 Sky Blue with Brass trim. 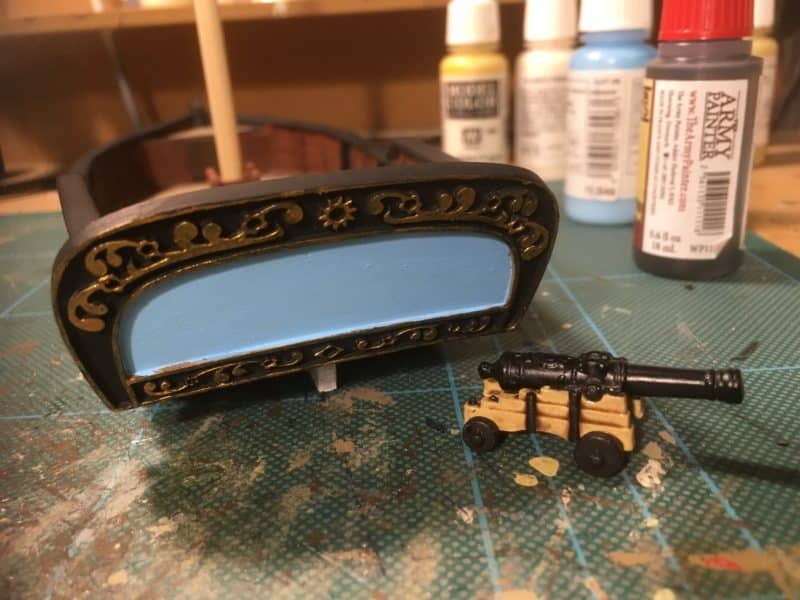 Stern of the Sloop

As you can see, I’ve also painted one of the cannon that will arm her. The cannon is from Arcane Scenery – the link is below. There is still quite a bit of work to do before she is ready for the table. Obviously, the mast, bow sprit and rigging will all need completion but I think that she will make a nice addition to my Caribbean collection. Incidentally, I haven’t got too hung up on how accurate the colours are. Although the sloop (?) will be crewed by the Royal Navy, it seems that even when it comes to such an iconic ship as HMS Victory, there is some controversy as to the actual colour:

So I am not going to be too precious regarding the colour scheme of a fictional boat designed to go on a wargames table! The other dilemma that I have is what to name her – I think I will resist indulging my sense of humour and perhaps steal a name from an Alexander Kent or Patrick O’Brien novel… 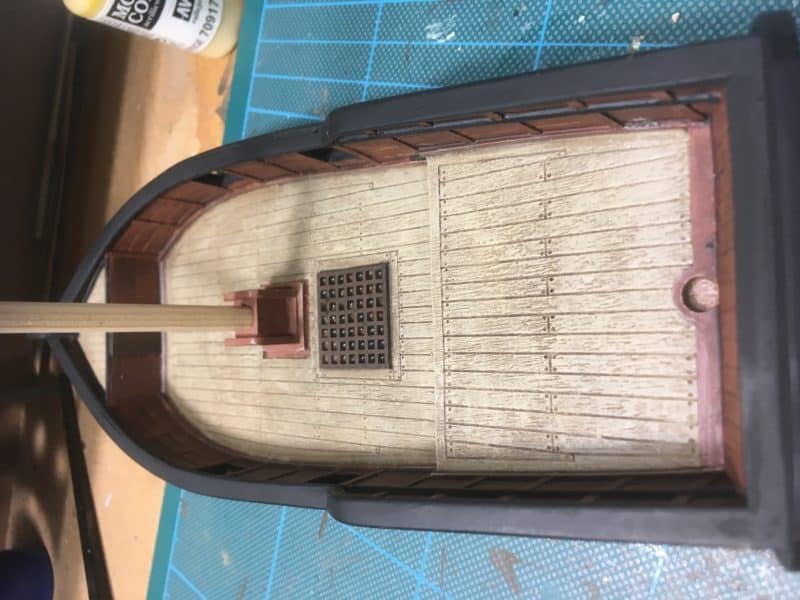 The view from the stern

So, the next job will be to fit her out – hopefully, I’ll make a bit more progress now that the clocks are about to go back. 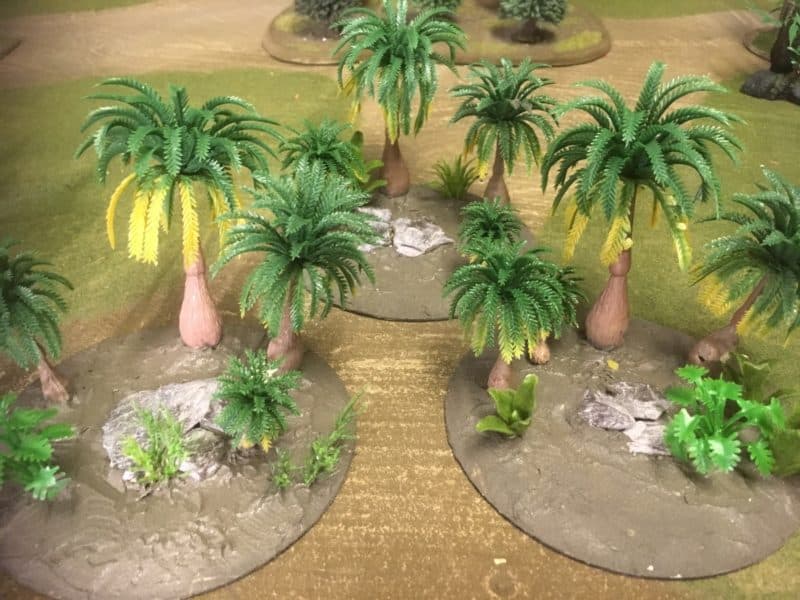 In between painting the Sloop, I’ve been making three more pieces of scatter scenery for the table using a slightly different variety of palm tree. They are waiting for a coat of paint and some scatter but are nearly complete. If you missed how I make these, check out last weeks blog ‘ Desert Island Discs’.  Although you can never really have too much of this sort of thing, I think that this will do me for the time being. I have plans to make some area bases to incorporate these pieces. If it works, I’ll include this in a further blog.

That’s it for now, here’s the usual links. Remember, if you are buying from Arcane Scenery, at the time of writing, postage is free to most worldwide locations!

STOP PRESS! I’ve just remembered the supplier of my boat. the Web site is Games Of War, you can see their excellent range of boats here: