I thought that it might be interesting to show the processes involved in bringing a new miniature to the market. Arcane Scenery own the DeeZee range and since purchasing it we have been very slowly expanding the choice of models available. Buying the range was more of a whim than a serious business decision but I was intrigued by the models and the potential  – if we could build the range and revitalise it. That is not quite as easy as it sounds, as I am no sculptor and Arcane Scenery as an online retailer, has no production facilities. We do have the advantage of being right in the middle of the Nottingham ‘Lead Belt’ and as a result, come into contact with some very talented people.

We have recently started working with the guys over at War Banner and inspired by some of the awesome figures that they have been and will be releasing, I decided it was time to add to the DeeZee range. But where to start? Like many in the hobby, I had plenty of ideas and there was no shortage of suggestions from friends and colleagues. After much consideration, I decided that a terror bird would fit into the range and was commercial enough to appeal to the historical collector as well as Pulp, Fantasy and RPG gamers, meaning that we would have a chance of recouping the investment required. 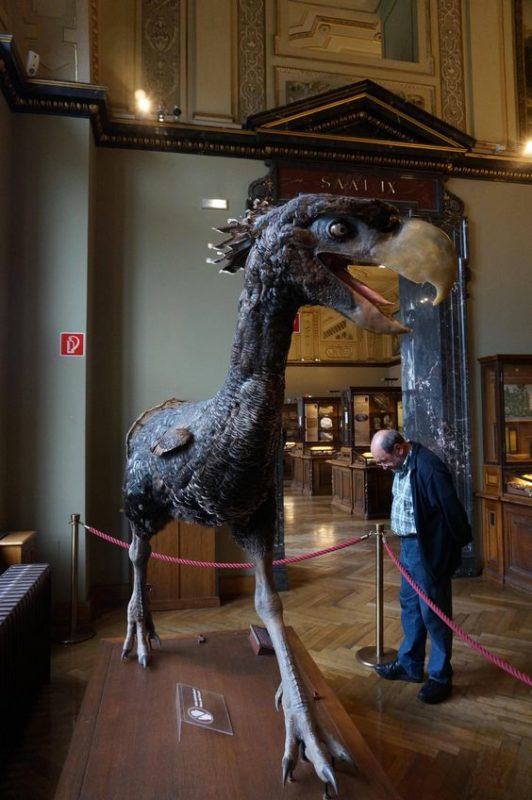 The first job was to find a sculptor. I had in the past been in touch with a few sculptors in the UK but circumstances at the time had stopped me from progressing with the project. So after past false starts, this time, thanks to Andy Hobday at War Banner, the very talented Stavros Zouliatis was contacted.  Stavros had sculpted the soon to be released Warring Clans Samurai figures. I had already been drooling over them as a hobbyist, so when Stavros said that he was not only available to sculpt but also very enthusiastic about the project, it was all systems go! Stavros is based in Greece but despite the distances involved, thanks to the wonders of technology (I am still amazed at what can be done, much to the amusement of the ‘youngsters’ that I work with) it was a relatively simple matter to formulate the model. Using my pinterest board as reference and Facebook messenger as a way of reviewing progress, work was soon under way. 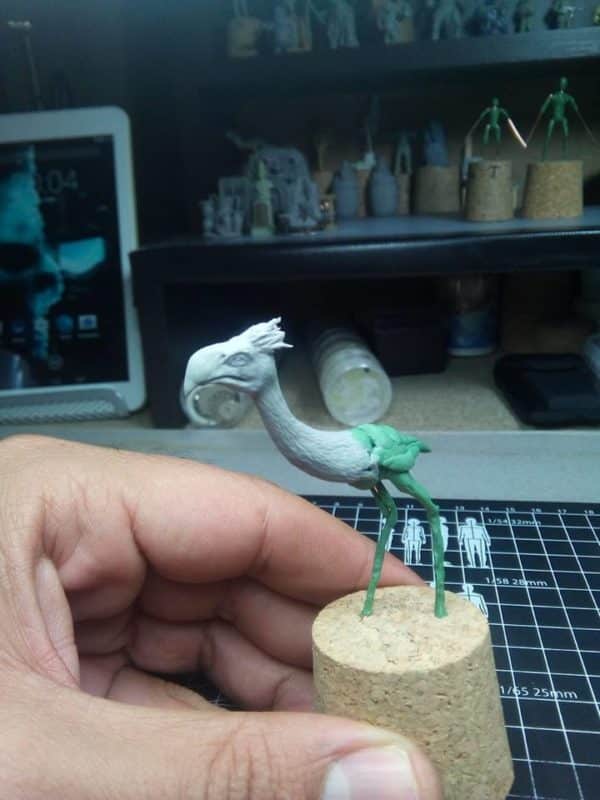 The picture below shows the Terror bird nearly completed – the sculpting process took about a week on and off. 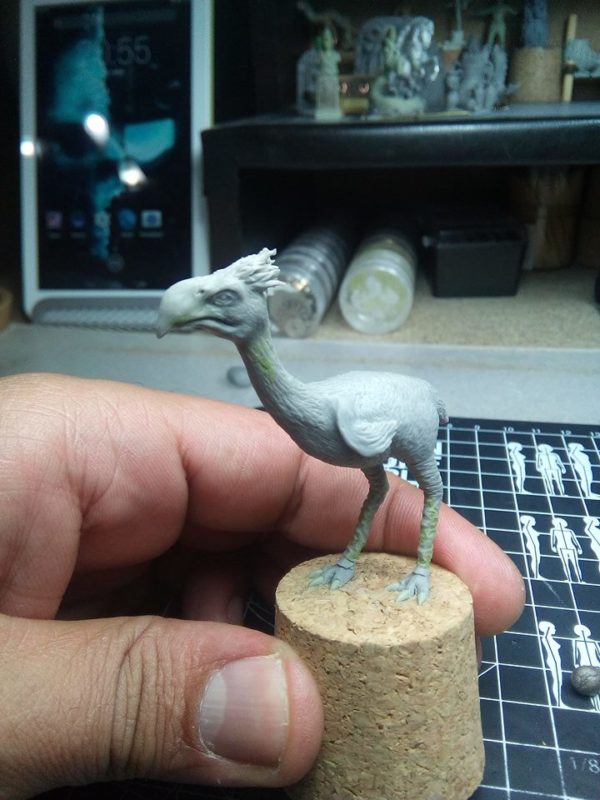 Although the sculpting process was complete, we had to give some thought as to how it would be cast. We decided that the legs would be better as separate pieces to the body and also to add a base. 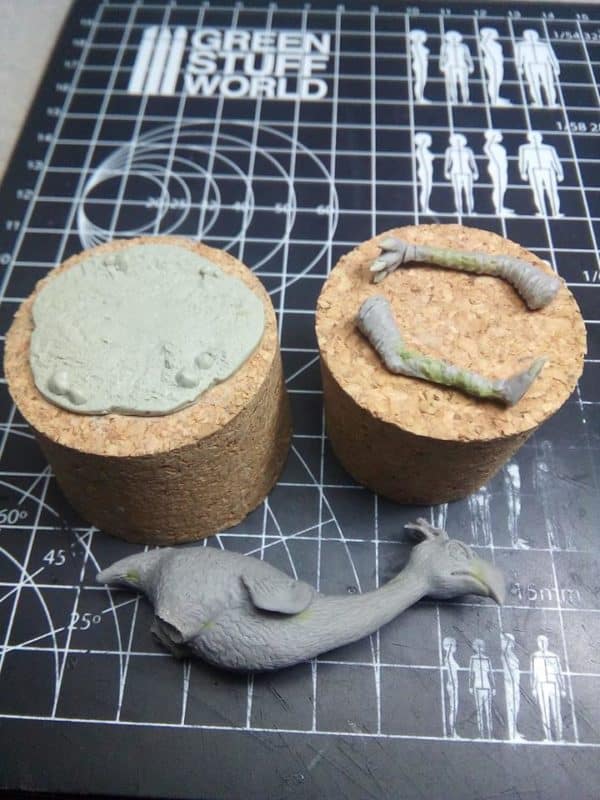 The next stage was to turn the ‘green’ ( the name of the original model or prototype – usually made from green stuff epoxy clay) into a metal model.

To do this the green is pressed into a rubber mold and then cooked to produce a master mold. Ben, of War Banner games was responsible for this process. It can be quite traumatic as there is the danger that the original will be damaged by the high pressure involved. I’m happy to say that all went well – we even managed to recover the original ‘Green’, which is often lost in this process. 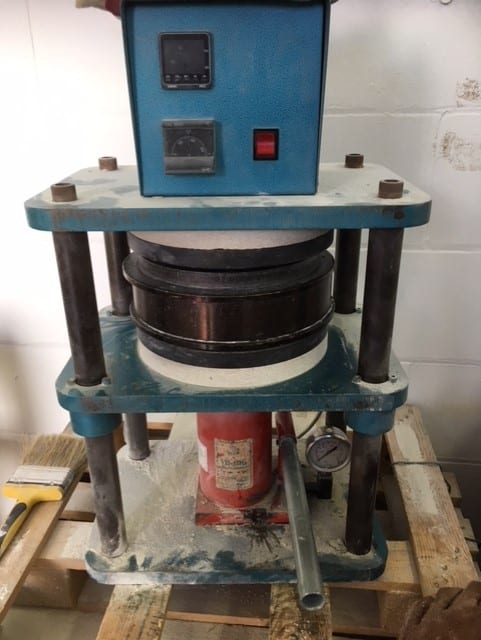 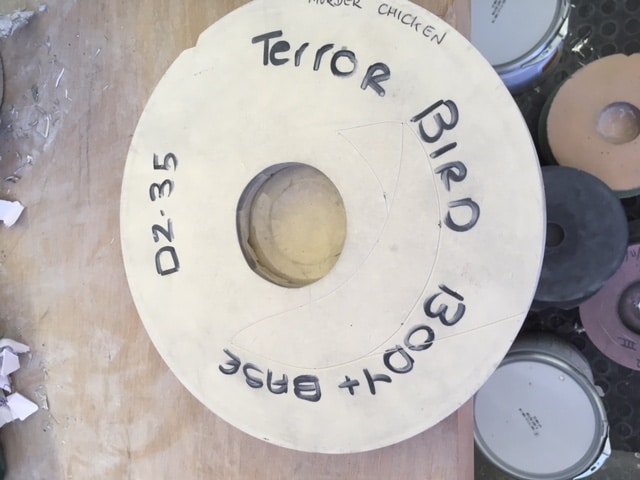 Terror Bird Production Mold – look carefully and you can see the guys at War Banner have good sense of humour…. 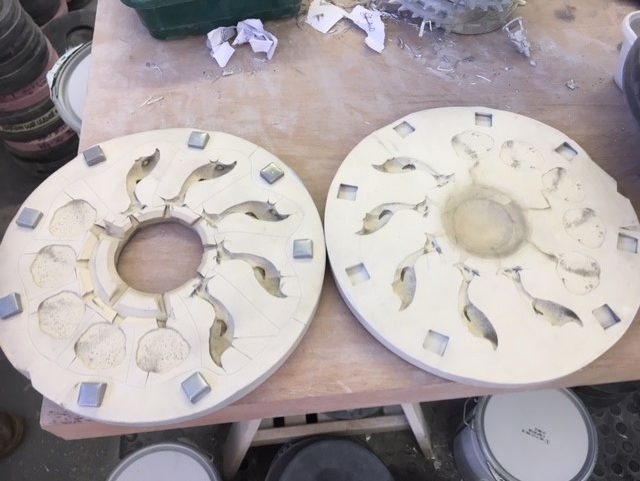 terror bird mold open – this is where the metal goes!

It is now just a case of ‘running’ the molds to build the stock of the model so we are ready for orders. We usually hold a stock of DeeZee models so there is no delay in dispatching orders. 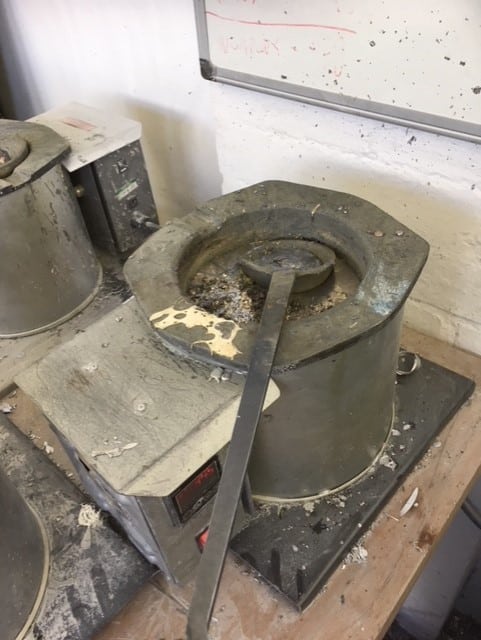 Hot metal in the Hotpot!

The final stage in the process was to get a model painted. Jasmine Storey-Smith kindly offered to paint the very first Terror Bird from DeeZee. I think that she has done a super job and the model looks just as I hoped that it would. 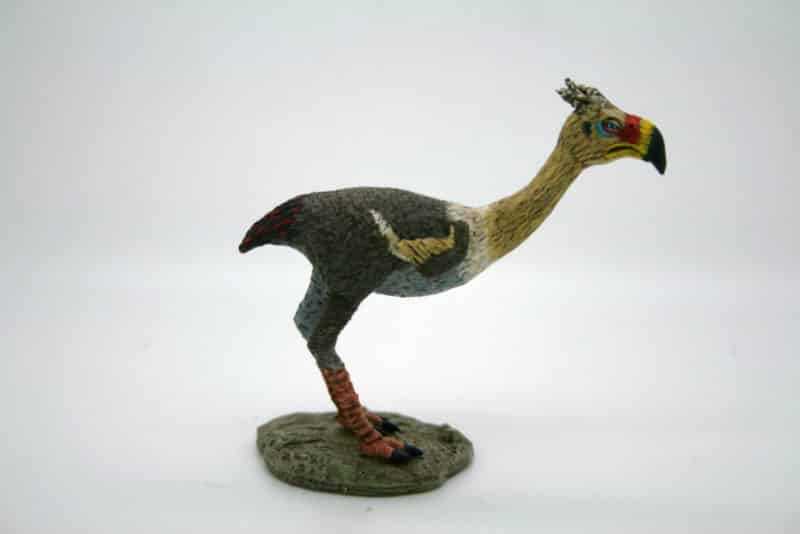 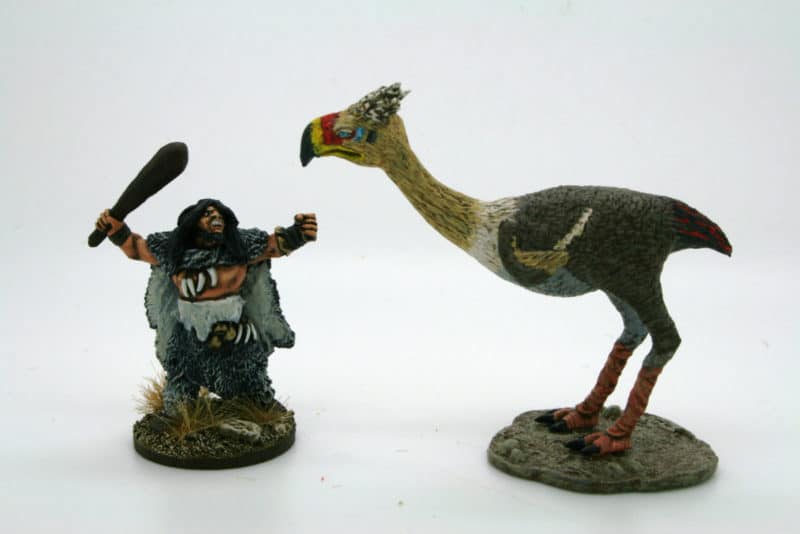 And so the Terror Bird, DZ35 is ready to launch…Well it’s available to sell – it will never fly! It’s quite a time consuming process and has involved a number of people. As with all of these projects, the materials aren’t really the cost, it is the time and skill of those involved that have to be paid for. I must thank again, the team at War Banner, who as well as supplying their expertise and advice, have been great cheer leaders as well. If you are thinking of commissioning your own range of figures, War Banner have all the facilities, skill and enthusiasm that you will need to get your project up and running.

We certainly will add more models to the DeeZee range. Like I said in the introduction, we are not short on ideas! Who knows, we may have a rules set in the pipeline….

If you would like to buy your very own Terror Bird, (post free at the time of writing!) you can do so here:

You can see the full DeeZee Range here:

If you would like to see more of Stavros’s work or to commission a sculpt , click here:

We hope that you enjoy your modelling!