Jonas Jones has been busy with his jewellers saw and clippers to bring us some more conversions from the Trent Miniatures range. I think that there is a tendency in the hobby not to convert metal figures but Jonas shows that with a bit of imagination, some simple modifications can give quite a bit of variation. The starting point is the pack of French Sailors from the Caribbean range, pack CAR24 ( links below). A useful pack as French Sailors had no regulation uniform at this time, so these chaps could be seamen of other nationalities or augment a pirate crew.

The pack was produced for the Caribbean range as in June 1793, about 2000 French Sailors, led by the newly arrived Royalist Governor of St. Domingue attacked the colony’s principal port, Le Cap, defended by the Republican commissioners. In two days of savage street fighting, involving also the National Guard and several thousand revolting slaves, 90% of the town was burnt down, before the Governor and his sailors were beaten back to their ships.  Someone noted that whilst the sailors were good fighters, as more buildings having stores of liquor were ‘liberated’, so their inclination and ability to fight diminished! Perhaps building a force of 2000 French sailors is ambitious ( although we will be happy to supply them!). It does seem that a small force or unit would be very useful to have and we could see them participating in many smaller skirmishes! So without further ado, Jonas explains how he converted his latest models. 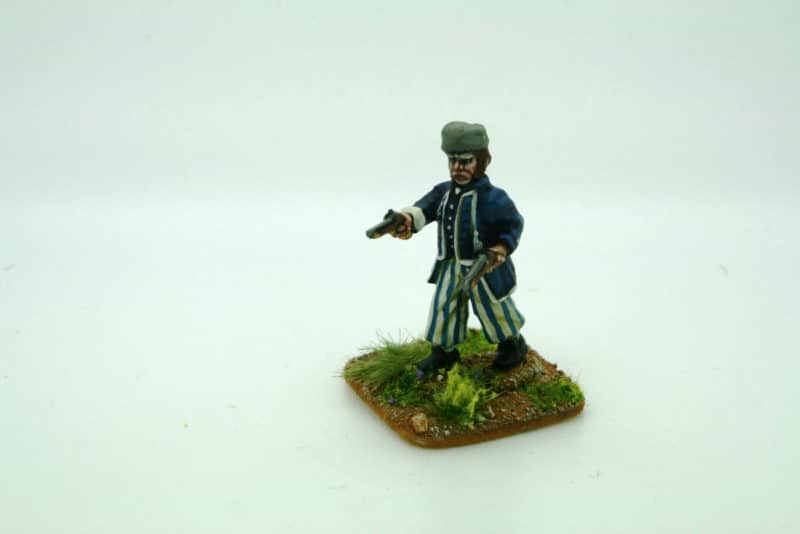 “This chap was inspired by the closing action from the Butch Cassidy and the Sundance Kid movie. I wanted a two-fisted pistoleer prepared to go headlong at the opposition. (Even braver with a pair of flintlocks rather than the six-shooters!). The figure’s right arm was clipped off with a pair of flush cutters and a right arm from the French Dragoons (Haiti) – pack Car 14 – was substituted. (About 15 seconds work with a pin vice).” 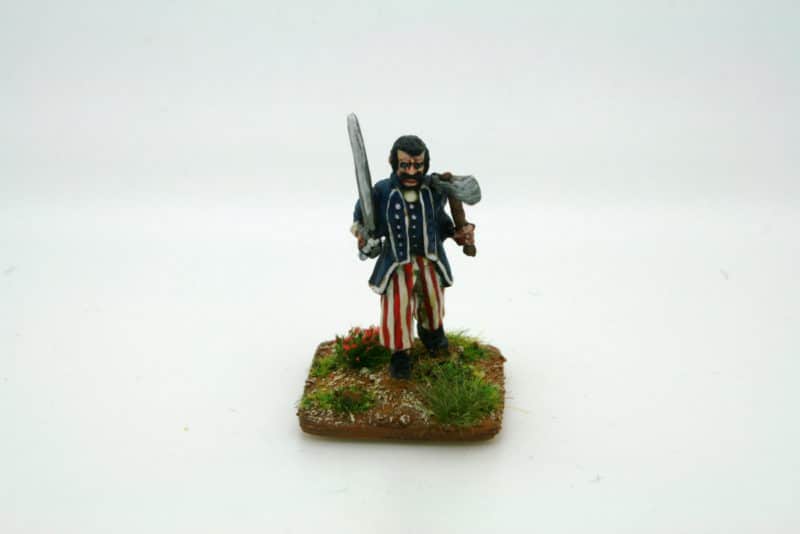 “When Israel Hands made his appearance in season three of Black Sails, the potency of a cutlass and boarding axe combination was demonstrated to perfection: four opponents despatched in about the time it’s taken to type this paragraph! Again, the right arm has been cut off and this time the shouldered sabre arm from the French Dragoons (Haiti) is substituted. The head is from the EDZ08 bare heads pack. Obviously, a man wielding two fearsome weapons would have a fairly stern demeanor; I felt that the moustache provided some “sternification”!” 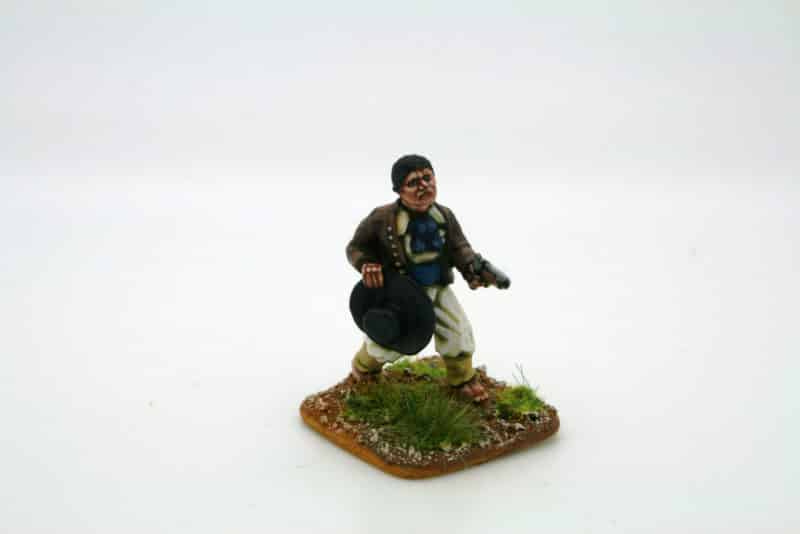 “You’ll remember the bit in the movie The Professionals when the Mexican bandit leader passes his hat across the front of his holster to mask drawing his pistol. That influenced this conversion. It’s one of the boarding pike figures with its left hand snipped off and replaced by the seperate left hand with pistol. The right hand was drilled through as one would for a pike, but then a cut was made from underneath and the hat superglued in. The hat is from the Car19 pack – Poles in St. Domingue. Flush cutters and a small file have removed the Polish head from underneath the hat – there are always casualties in war!” 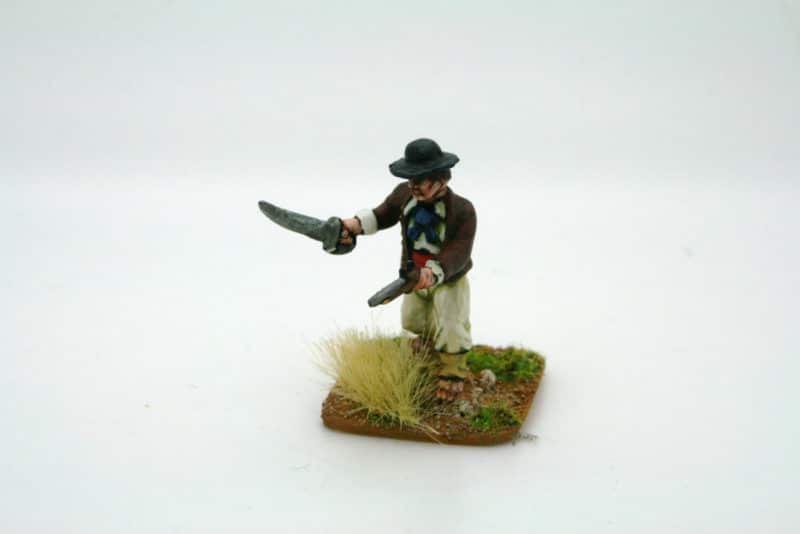 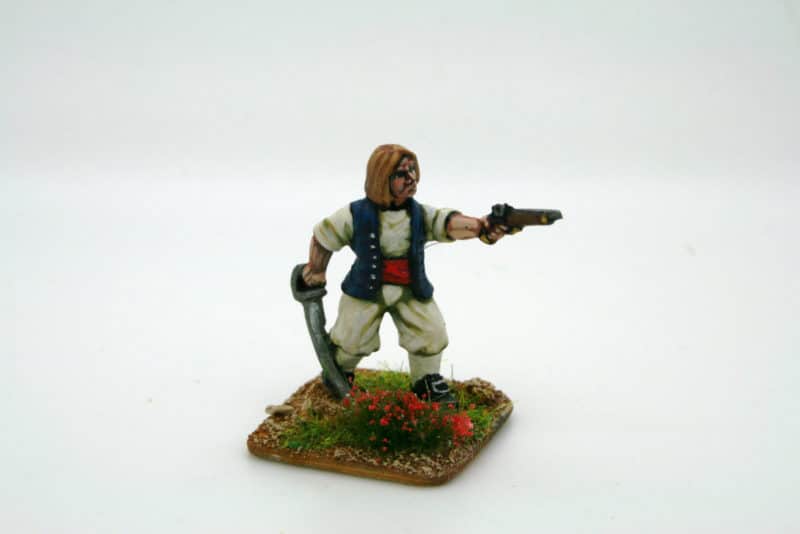 “This isn’t really a conversion; it’s just the chap firing his pistol given the priest’s head from the Chouan/Vendean Characters bis pack (FCHOU 06). I just felt that it looked right. 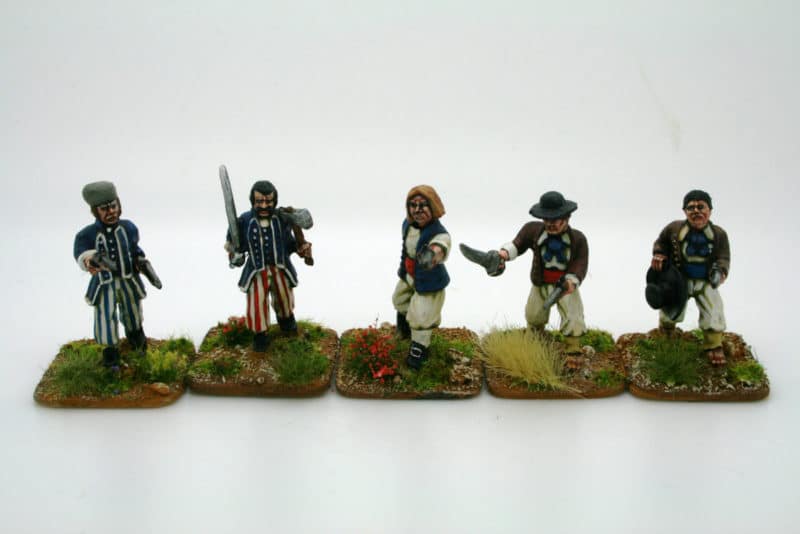 I hope the this article will give the reader some ideas as to how to go about making some simple changes to figures to get a new look. It’s surprising how a simple head or arm swap can change the look of a figure and allow a modeler to stretch one pack of five figures to make a unique band ideal for the many skirmish games that are out there. Jonas has used other metal figures to complete his conversions  but plastic bits will work just as well – I’m sure that most of us will have a decent bits box to dive into! You often dont even need to use figures from the same period – a dark age figure holding an axe could be used to provide a boarding axe!

If you are thinking of converting figures though, you will find that the Trent Miniatures EDZ range is a good place to start – plenty of options for easy head swaps.

We carry the full range of Trent Miniatures. You can find the Caribbean Range here:

WARS IN THE CARIBBEAN

You can find the EDZ range and other equipment here:

If you need a pin vice, pair of flush cutters or tools in general for your hobby, check here:

I hope that you enjoy your modelling!