One of the pleasures of the wargaming hobby for me, is watching my collection grow as I add each new unit. My Napoleonic collection is broadly themed around the Battle of Waterloo and the 100 days Campaign. This gives me a structure to work to when building my army. I don’t intend to make every unit that served in the Allied army, although sometimes it feels like that is what I am doing! 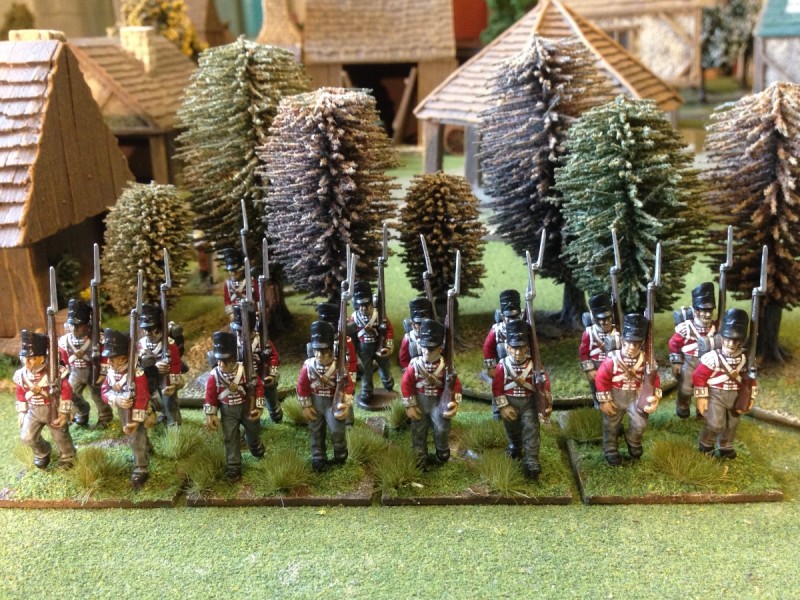 I have been working on what I think is one of the most interesting of the British Brigades that fought both at Waterloo and at Quatre Bras, two days earlier. It is the British 8th Brigade, commanded by Major General Sir James Kempt. The brigade consisted of the 28th North Gloucestershire’s, 32nd Cornwall, 79th Cameron Highlanders and 6 company’s of the 95th Rifles.

As I have mentioned, the brigade fought well at Quatre Bras, with the Rifle Battalion occupying ‘Cherry Wood’ just north of the Namur road to stop the French encirclement. With just 550 men, they managed to throw the French into confusion and push back the 2e Leger, some 2000 men. The French unit ‘fled without awaiting the enemy and the rest of the division fell into disorder and, not content with abandoning it’s ground, did not stop, even on reaching the high ground beyond Gemioncourt.’

Lady Butlers painting of the 28th at Quatre Bras.

If the rifle battalion had performed well, so to did the rest of the brigade who were thrown into the battle against the French advance. They blasted away Bachelu’s leading regiment, 61e Ligne with their disciplined fire, again causing the French 5e Division to fall back. Later in the battle, in what seemed to be a rehearsal for the events that would occur two days later at Waterloo, The brigade formed squares to resist the French Cuirassiers, pouring volley after volley into them without breaking.

The Brigade went on to Waterloo and faced D’Erlons attack – but that’s another story – back to the modelling!

As well as their contribution to the 100 days campaign, from a modellers point of view, it is the variety of units in the brigade that interests me. The 28th were wearing Stovepipe shakos and had yellow facings as well as having an additional badge on the rear of their shakos. The 32nd Cornwall battalion was a standard battalion with Belgic shakos and white facings. The 95th, are of course the famous green clad rifles, which leaves the 79th, a Tartan clad Highland battalion with green facings.

I have already completed the 28th and 32nd – you can read how I went about modelling them in my earlier blogs. Here are two of the articles to get you started!

I had decided to use the Victrix Plastic Highlanders to make the 79th Camerons. I am happy with plastics as opposed to metals and like the process of putting plastics together. It also means that my army is lighter when it comes to moving them around! The other benefit of the Victrix set is that you get 60 figures plus plenty of spare pieces, so conversions are straight forward. The Victrix Highlanders come as either a centre company boxed set or as a Flank Company boxed set. I went for the Centre company set as I have a box of Flank company line infantry and I will use the arms from this set to make my Flank companies. 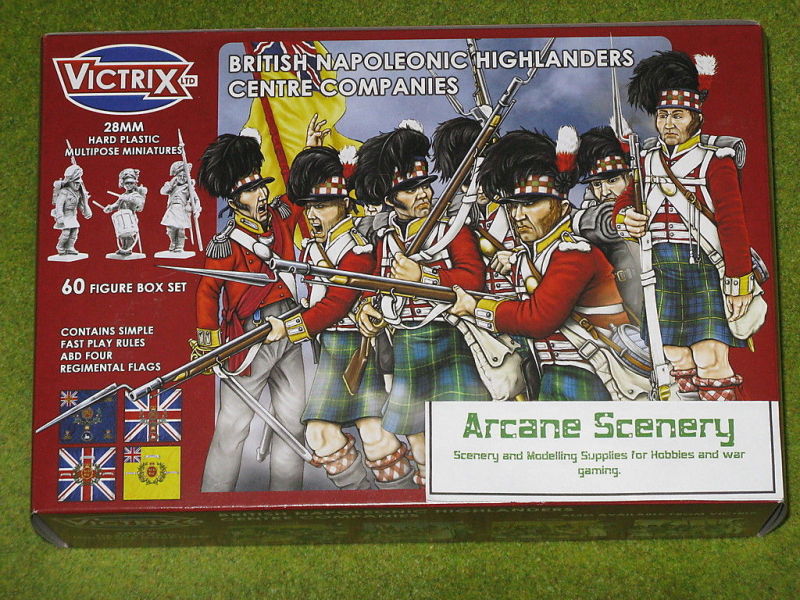 Assembly of these models is quite straight forward, there is minimal flash and mould lines to remove. As always, I use polystyrene cement to glue them together. This gives plenty of working time and results in a much stronger bond than using super glue. You will also find that the joins fill if you let the cement soften the plastic for a minute before you press the pieces together. 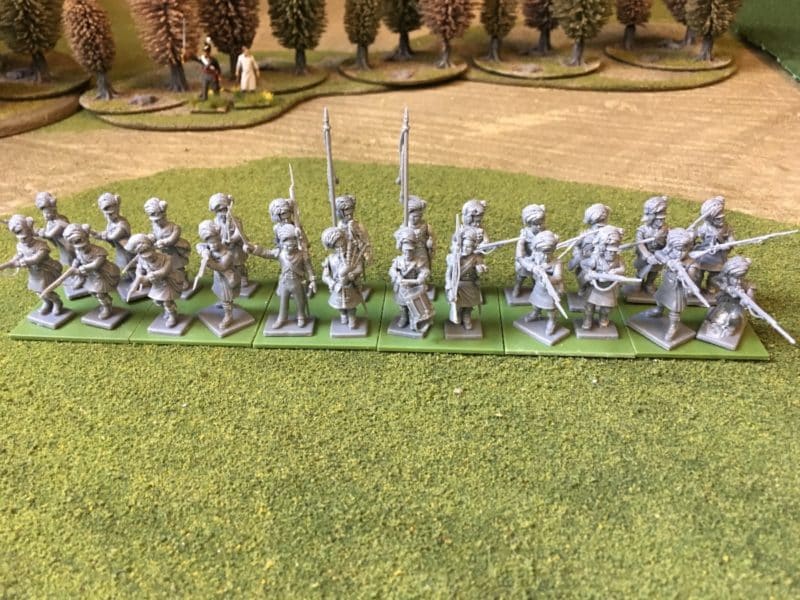 The assembly instructions are sparse but do make it reasonably clear what arms go with what body. There is a choice of heads. Some have a peak on the highland bonnet, some do not. I am told that the highland troops were ordered to remove the peaks for the Battle of Waterloo but I haven’t worried about this level of detail and my unit has a mixture of peaks and no peaks! I know that some modellers will find this casual attitude unacceptable but I am happy to mix it up. My troops aren’t meant to be frozen in time to one Battle and I’m happy to believe that whilst the troops may have been ordered to remove the peaks, what they actually did at the battle when the sun came out may have been different to what they were ordered to do! 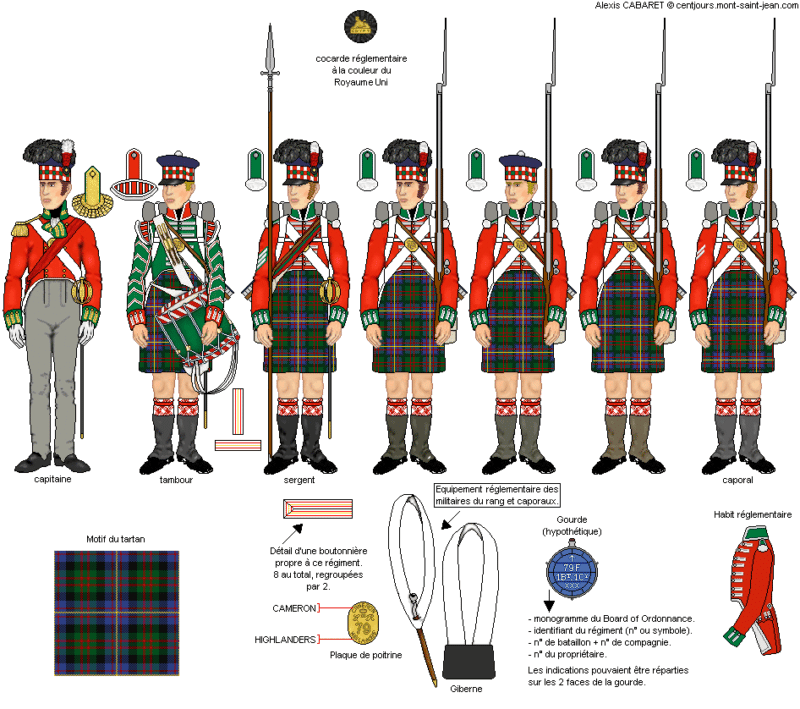 I have assembled 28 figures. The main Battalion will be represented by 24 figures, this includes the Grenadier Flank Battalion. I have also put together an extra four figures to represent the detached light company so that I can use them either for skirmishers in Black powder or as separate figures for Sharp Practice.

So I’m almost ready to start painting. Indeed, I have undercoated the first batch of eight figures. I will use the Mont St Jean reference sheet ( shown above) as my main painting guide but I will also have a quick scan of my other references, Franklins British Napoleonic Uniforms, The Companion to Waterloo, the appropriate Osprey and of course pinterest/google. I don’t expect this to be a quick project as I am concerned that the Tartan and detail around the head band and socks will really take time. If all goes well I’ll update my blog with my progress. I have half a mind to carry on and paint the other two highland regiments but one step at a time….

If you would like to get hold of the Victrix Highland sets, we carry them as part of our Victrix range here:

We supply post free to most worldwide locations. If you are looking for glue, paint, tools or basing materials just click the link into our shop – we have a huge selection!