I was lucky enough to be able to attend the Mortal gods play test event at Boards and Swords in Derby last Sunday. The venue is well worth a visit and if you are anywhere near to the Derby/Nottingham area, you might consider using the venue for a gaming event or hobby day with your mates. There are plenty of tables and the venue is very easy to get to by car, with safe free car parking on site. I think that the growth of such venues is good news for the hobby. Not everyone can find a local gaming club but a venue such as this can soon provide contacts and of course opponents! We have ‘bookmarked’ the venue as a possible location for one of our future Black powder grand scale games! The web site address is at the bottom of the page. 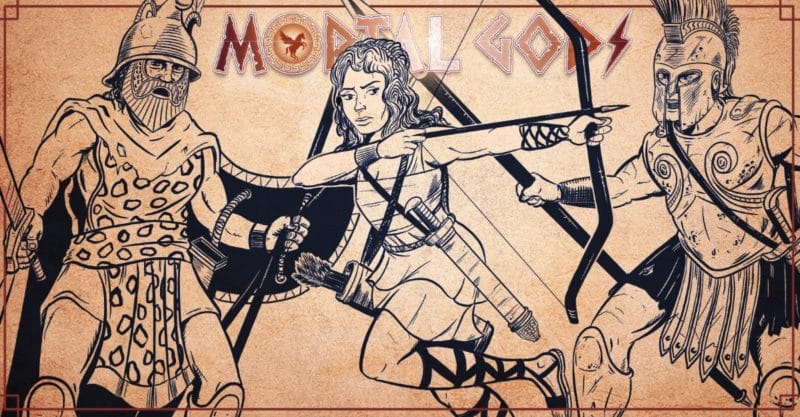 As usual, I digress, back to Mortal Gods. The demo games were organised by Andy Hobday and Mark Farr of War banner, so there was plenty of expertise to help facilitate the games. The game is based on the same game engine as Test of Honour, with all the Samurai background and flavour stripped out and of course, plenty of Ancient Greek flavour added back in! If you are not familiar with Test of Honour, it’s worth explaining that the game is essentially a skirmish game built around small war bands. This makes the game an ideal entry point into a genre that perhaps you hadn’t considered before. I certainly had not planned to start a Samurai Army, but Test of Honour facilitated the start of my collection and allowed me to try the period without having to commit to buying and painting hundreds of figures before I could start gaming. 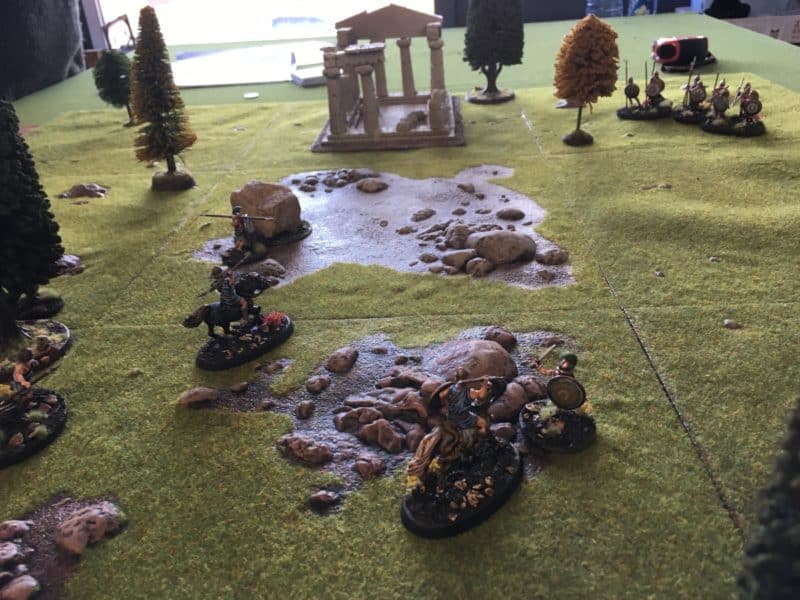 Test of Courage will do the same job for Ancient Greece. If you have been tempted by such films as ‘the 300’ – the Battle of Thermopylae – or other such or tales but never had the enthusiasm to paint a massive Ancient army, then this game will help to scratch that ‘itch’. A typical war band or Lochos will consist of around 20-30 figures, although it is possible to use more or less, depending on the scenario and the players involved. The other point to make about the game is that it is designed to be exactly that, a game. Whilst Test Of Courage is firmly set in the Ancient Greek realms, it is not designed to be a simulation or does not claim to represent an accurate view of combat in the Ancient world. Andy Hobday is very much focused on producing an enjoyable, cool game with some clever gaming mechanics, whilst Mark Farr and the War Banner team are steeped in the detail of the history and keep the game close enough to the period, with the appropriate troop types and weaponry, to make it feel like you are battling in Ancient Greece. 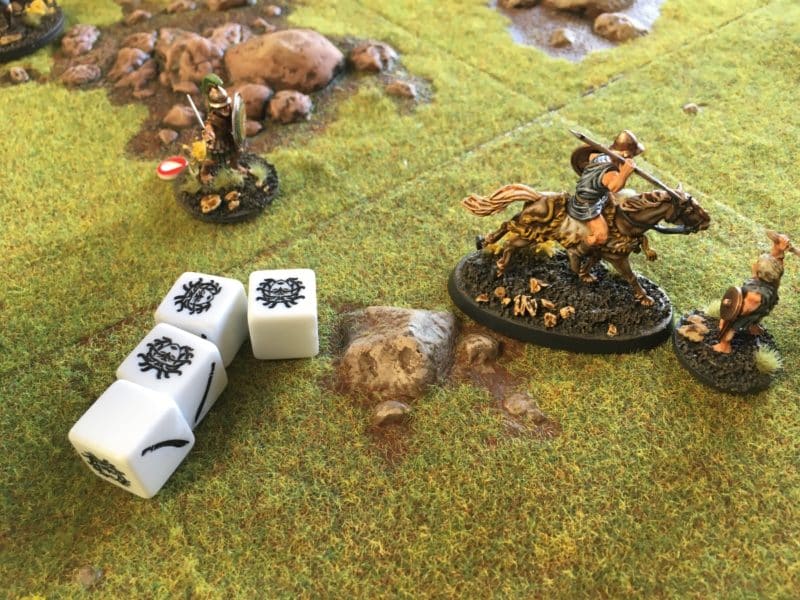 Not the best dice roll!

And so back to the play test game. I played two games, the games being superbly umpired by George and Jade, who were there to help with the rules and offer guidance when required. Having played Test of Honour, it was easy get get the general thread of the rules and we were soon focusing on the game rather than the rules. Your units or heroes are activated by drawing tokens and placing them on the appropriate card. The cards of course contain most of the stats and character rules that you need to play, so there is little need to refer to a rules book once you get going.  Most of the action is decided by rolling the special test of Courage dice. Three swords will give you a pass, Medusa’s are bad news! One of the cool changes is the ability to form your hoplites up into a ‘mini phalanx’ making them very tough to take on from the front. However, if you can get around the back….. The other change I like is the ability of your Hero or commander to use activation’s to give orders to other close units. Another mechanic is the fate tokens that are much more influential on the game but easier to come to terms with than drawing extra cards as in Test of Honour. Fate affects everyone in the game – watch out! 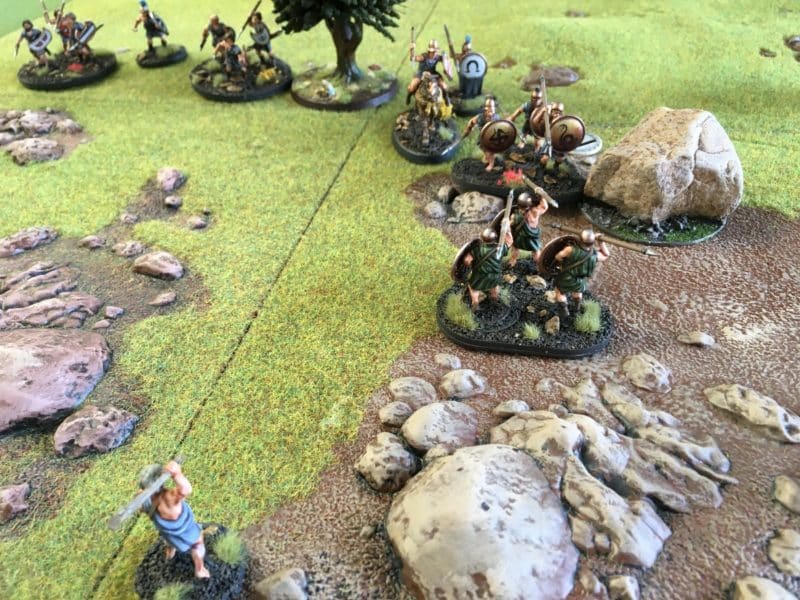 So when is the game released? Well actually not until March of next year. Which is another cool thing about the guys at War Banner. They are giving the basic game plenty of exposure to gamers and therefore the opportunity for the community to be involved in it’s development. The basic framework is there but in the light of play testing and feedback from gamers they are open to ideas. An example of this was on the day, the test for giving orders was moved from the receiving units stats to the hero giving the order, making it more likely that the order would be passed but still leaving the possibility of a fail occurring. 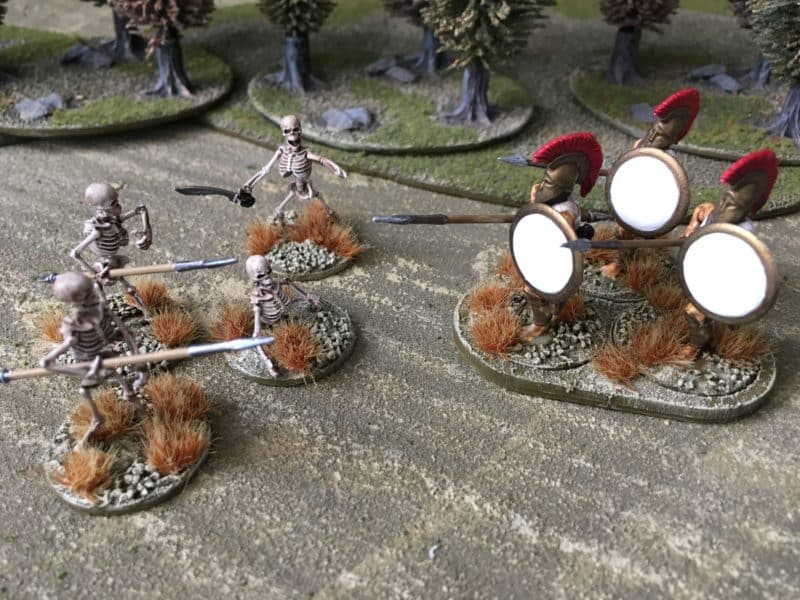 My Lochos is under way!

The other point to make is that whilst there may be some changes to the rules, Andy and Mark are working hard to ensure that the presentation of the game is top class. The Art work for the cards, rules tokens and all the other kit that you will need is already looking brilliant. With Stavros Zouliatis busy scuplting figures for the game to supplement the superb Victrix range that is already available and Sarissa Precision in the wings working on some evocative scenery, I can guarantee that the final product will be amazing!

If you would like to know more about Mortal Gods: A test of Courage, checkout the Facebook page here:

If you would like to make a start of a mortal Gods Locos, we have some great models in our range of Vitrix Models, available POST FREE to most worldwide locations!