If it’s possible to have too much of a good thing, then I certainly achieved this with my wargaming  last weekend. I had been invited to join the ‘Lancaster Boys’ wargaming weekend hosted by Mark Lodge deep in the beautiful countryside of North Yorkshire. The three hour drive up from Nottingham with Andy and Ian was very pleasant – Ian was doing all the driving (thanks Ian!) and as a bonus, we stopped off at the small town of Otley to visit a bookshop. The shop was rammed full of military books and as well treating myself to a copy of Military Dress of North America for just £4.00, Andy and Ian discovered some interesting treasures for their book collections.

I also found a copy of the board game ‘Risk’ – the 18th century version with all the minifigures for just £3.00 in a charity shop. The visit to Otley was rounded off with a most excellent sausage and bacon cob and a mug of tea and it was back on the road to head up to Marks house.

Mark has the sort of wargaming set up that most of us can only dream about. A purpose built ‘stable block’ is home to a huge custom built wargaming table and a collection of figures, scenery, books and memorabilia that had me drooling! His passion is for Hinton Hunt figures and preferred scale is 20mm but there are armies in all sorts of scales and periods. All beautifully painted, based and labeled. Mark is also the new owner of the Jacklex figure range and is in the process of revitalising this classic range of 20mm metal figures. It’s well worth a browse and you can see his web site by clicking here: 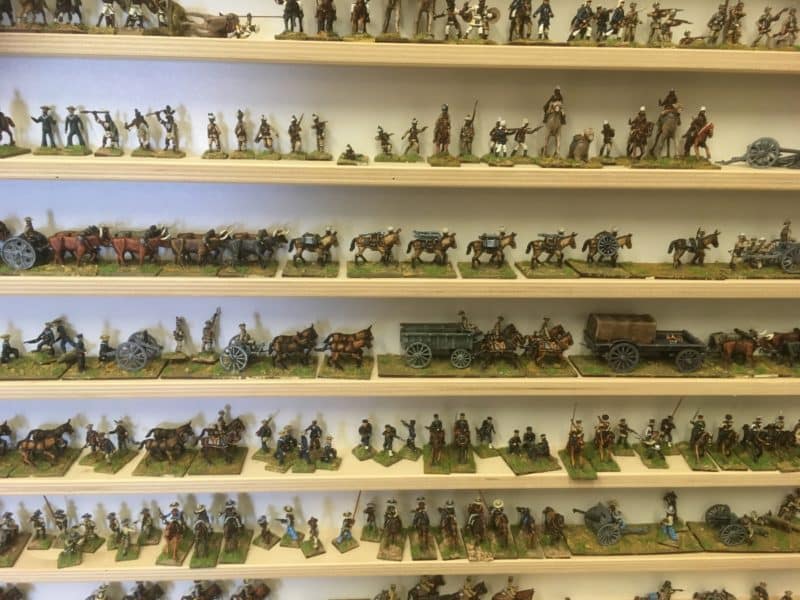 A small sample of the Jacklex miniatures range.

As an opener for the weekend, Tim (another founder member of the Lancaster Boys!) had downloaded a War of the Roses Table battle from the Wargames Vault. The game takes just 20 minutes or so to play. Rather than use ‘blocks’ or counters for the units, Tim had produced some lovely playing pieces using 20mm plastic figures – all beautifully painted and based. Tim had also ‘upgraded’ the reference cards that supported the game, making the game more intuitive to play and after just one game I think that I had the rules sussed! The game was based on the action at Bosworth -I played four times over the weekend winning two and losing two games, with Henry and Richard both victorious and losing equally! 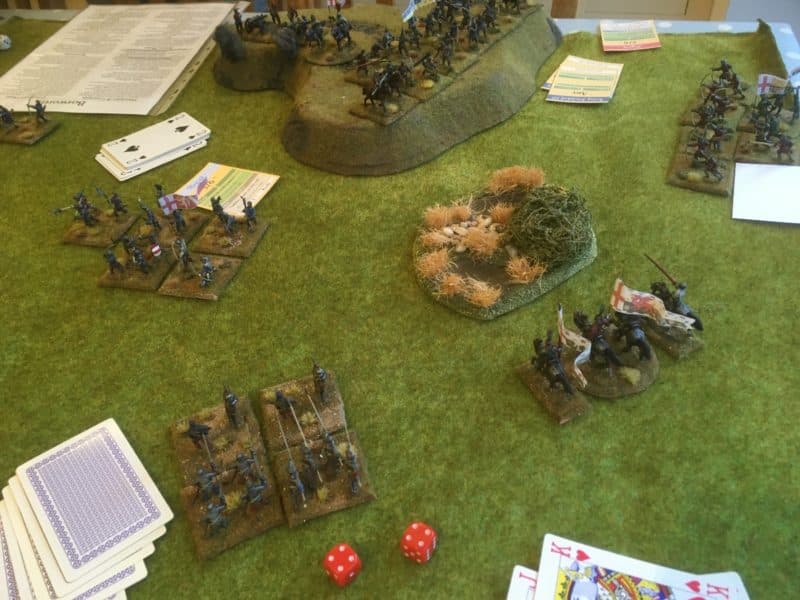 The main game of the evening was a Zulu War encounter, with rules and umpiring courtesy of Andy. I’ll let the pictures provide the narrative: 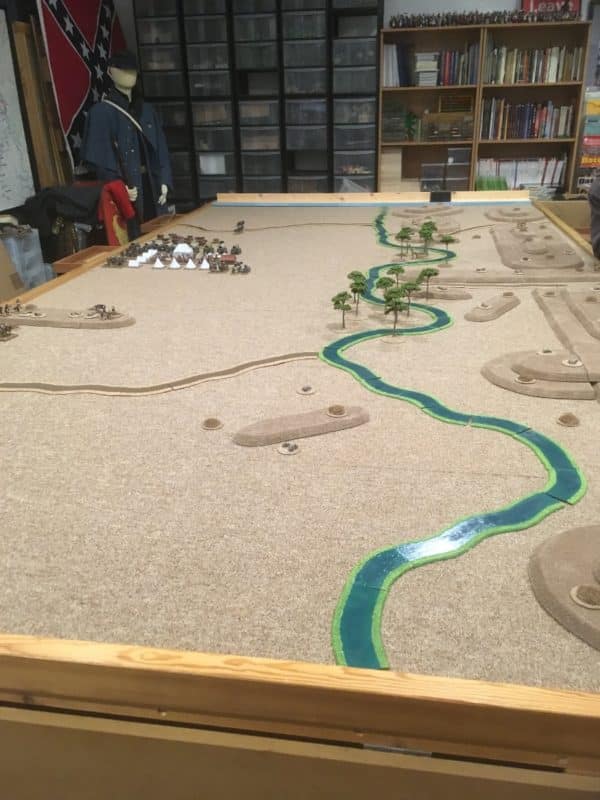 The battlefield – all is quiet! 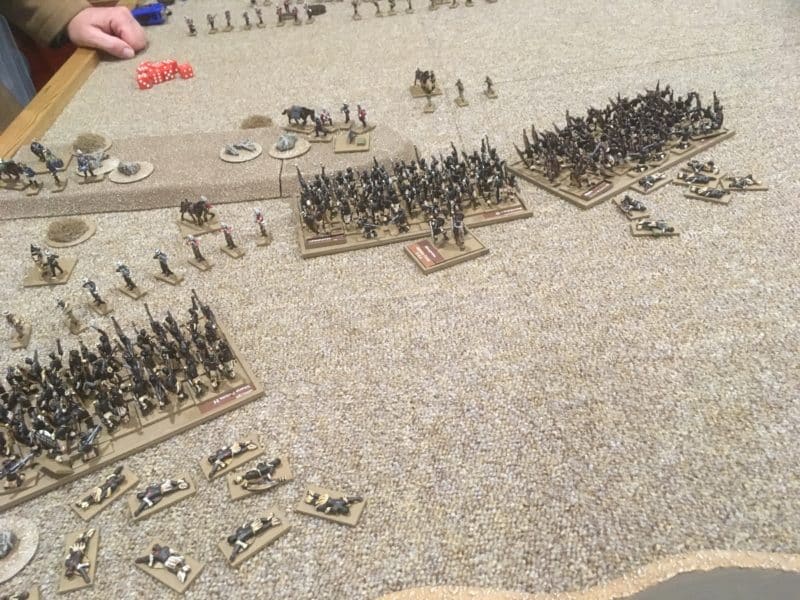 The left horn of the Zulu army attacks first and pushes back the British piquets. 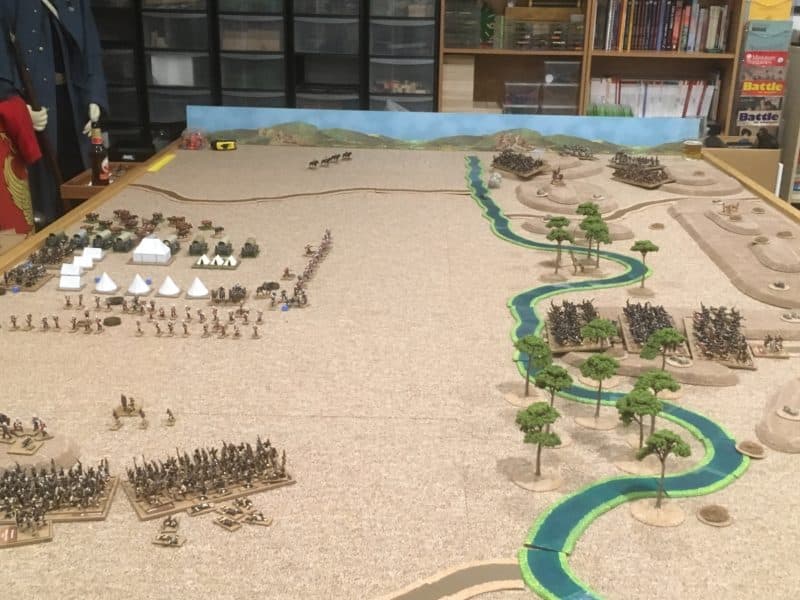 The chest and right horn of the Zulu army emerge from cover! 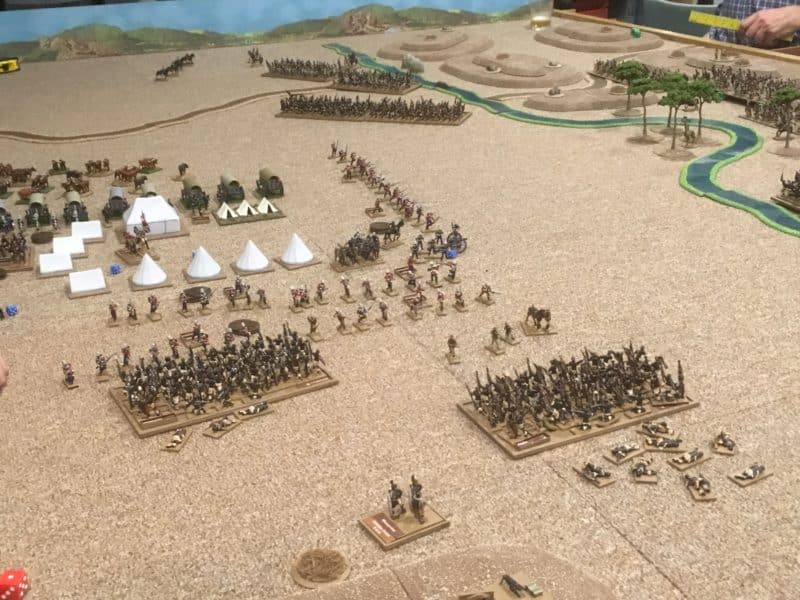 the Left horn charges into the British camp – in the background the right horn is advancing whilst the British are distracted! 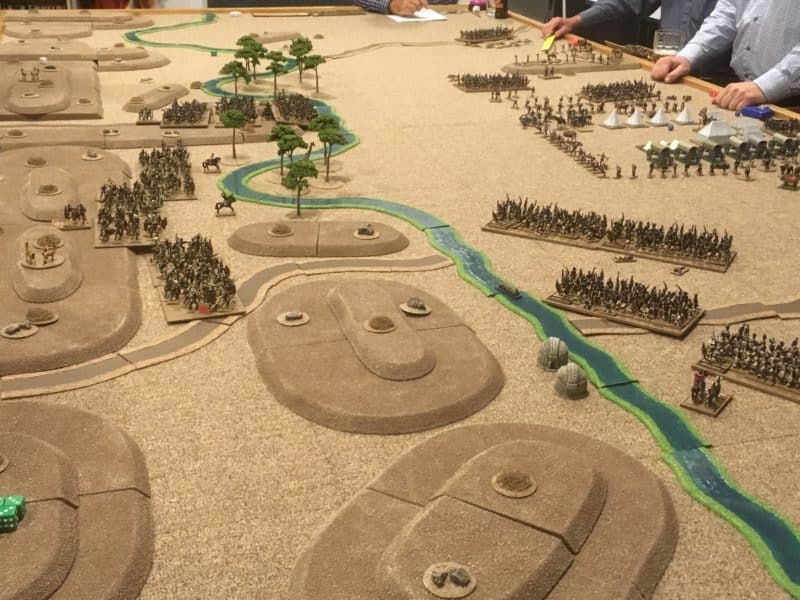 The chest and the loins begin their advance on the camp. The right horn of the Zulu army moves ever closer whilst the struggle on the left continues. 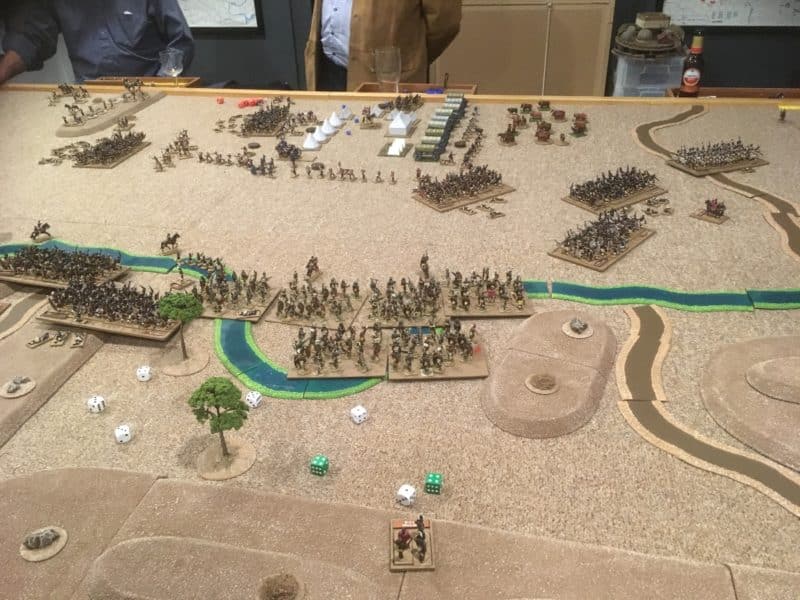 The right horn makes contact – desperate times for the British! 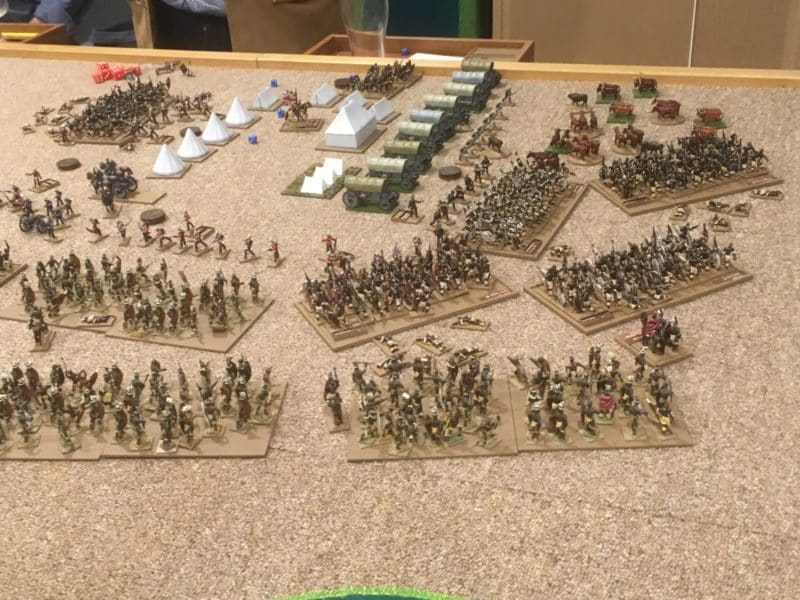 The camp is completely encircled! 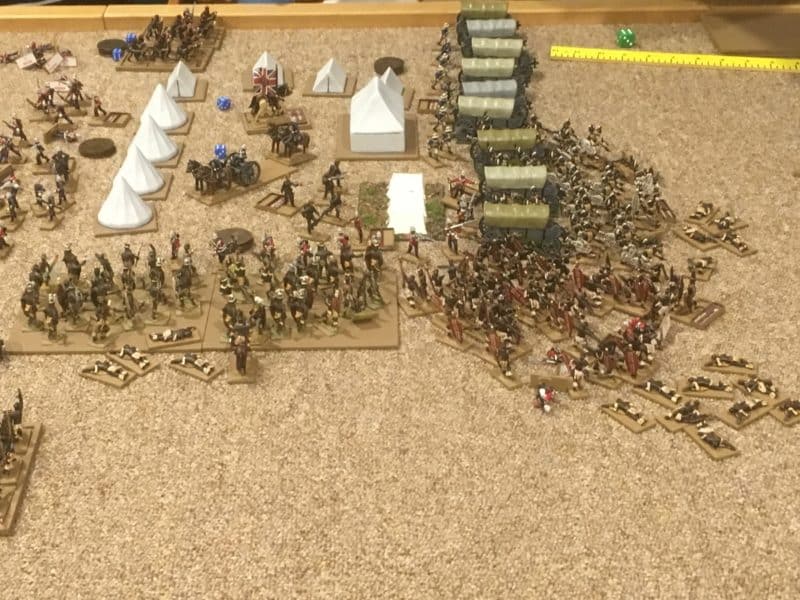 The Zulus on the right break through into the camp. 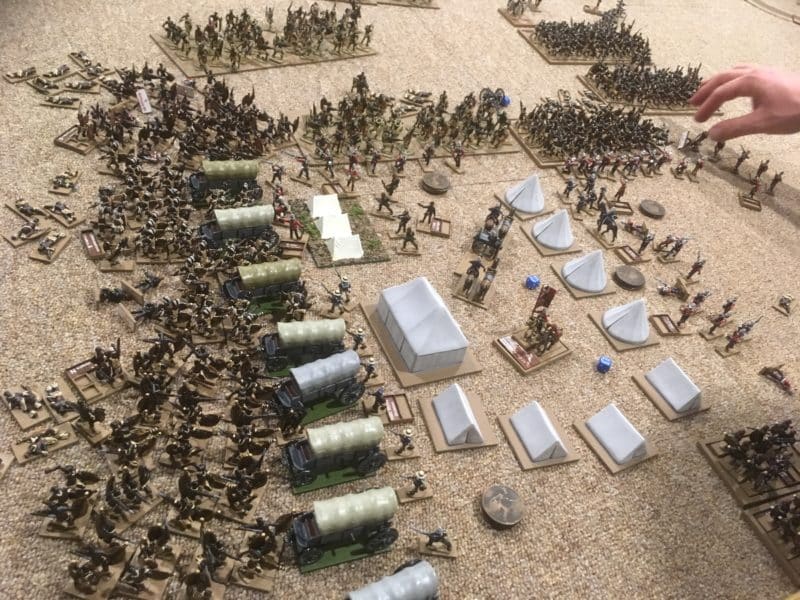 All is lost! The Zulus have broken through on the right and more Warriors have arrived to overwhelm the centre. It’s time to save the colours, Boys!

As you can see, the game ended in victory for the Zulu’s, with the British being overwhelmed as they put up a desperate defence of their camp. To be fair, the British were vastly outnumbered and it was difficult to see how they could repulse such a huge army without some sort of fortification – somebody should have laagered those wagons! As a side note, the game was actually based on the Battle of Little Big Horn but with roles reversed. Custer’s three columns were represented by the Zulus and the British camp represented the Sioux Encampment. The Little Bighorn river is seen meandering gently through the centre of the table and the Zulus were hidden in the hills above. If ever you are stuck for inspiration for the basis of a game, taking a historical scenario out of context, so to speak,  is often an interesting solution and certainly worked well for this battle!

The following morning it was a Napoleonic encounter to start the day. The battle was based loosely on the early exchanges in the Battle of Leipzig 1813 and was umpired by Ashley, using another ‘home brew’ rules set. Once again, the pictures should provide a very short narrative to the Battle. I find that whilst playing, I forget to take enough pictures! 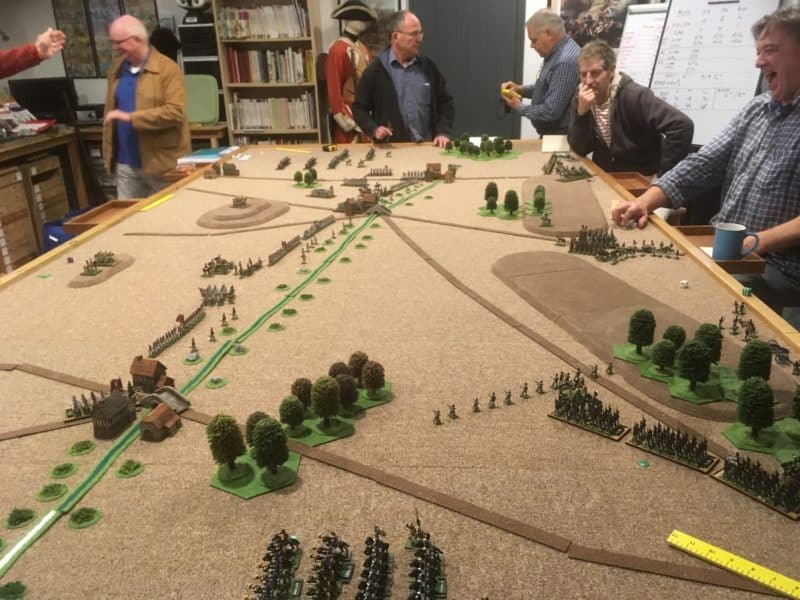 The Prussians and Russians to the right, French to the left. Let battle commence! Early deployment moves as the Allied army advances onto the table. 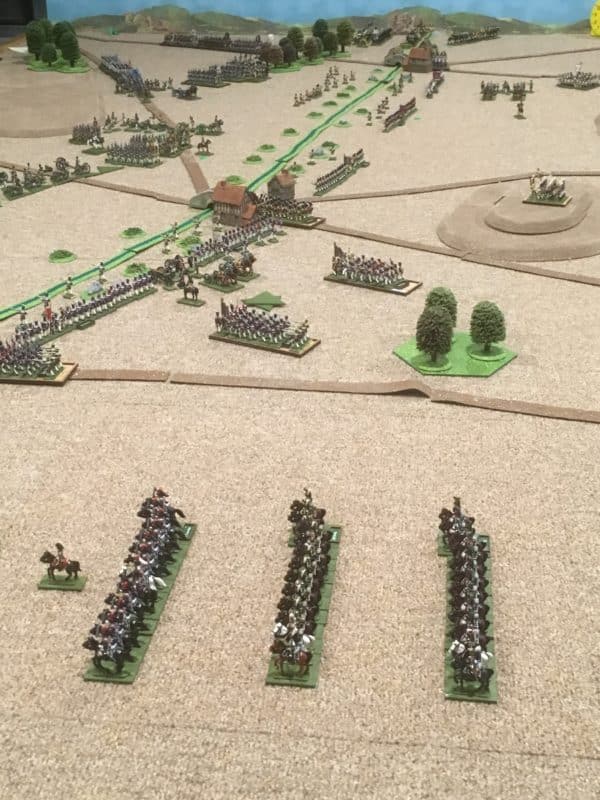 The view from the French side. The French centre and left are holding the Russians but in the distance the Prussian are making steady progress, threatening the right flank. 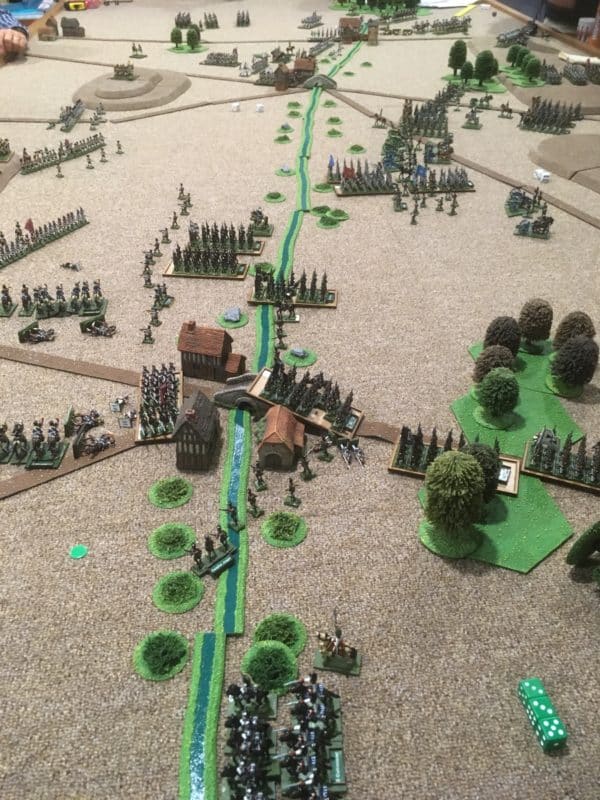 A decisive moment in the battle – the French are outflanked by Cavalry and the Prussian Infantry push the French from the village holding their right flank. 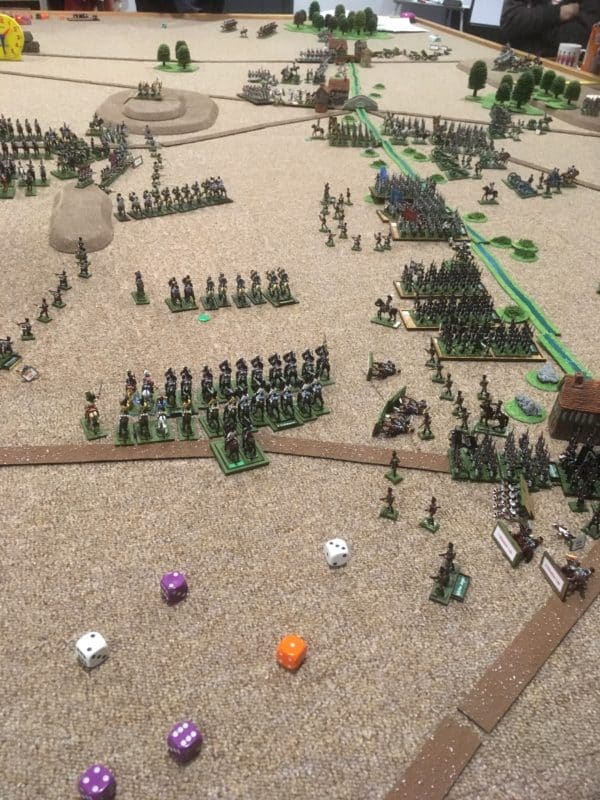 Prussians win the battle on the French right flank with the Prussian infantry pushing forward and the Cavalry routing the French infantry and over running their artillery – the French decide to pull back conceding the battle!

The day was rounded off by two other games. Unfortunately, I dont have pictures but the first was a Russian – Japanese naval battle which resulted in a draw with both Fleets suffering a hammering and the unfortunate Russians losing a ship on the last throw of the dice.

The second game was another play test of our War of the Roses rules set ‘Never mind the Bill Hooks’. I’m happy not to have pictures of this battle as I was the Lancastrian Commander that managed to make rather a mess of the whole battle. The initial deployment was not too clever and this was compounded by a rash cavalry charge that resulted in the demise of the whole unit. We used our best unit, the heavily armoured foot knights (24 points) to chase around after a unit of Irish kern (9 points) at the rear of the battle and finished things off with a forlorn charge that resulted in the death of the Army Commander Harry Hotspur – it wasn’t a good day for Tottenham fans…. 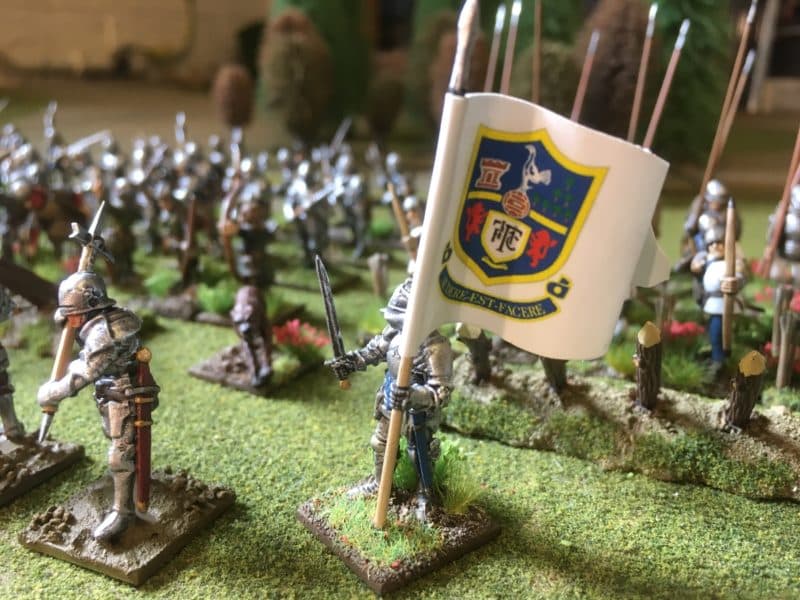 Harry Hotspur on a better day!

And so with five games played in less than two days, I felt a bit ‘wargamed out’ but it had been a most enjoyable weekend. I also ought to mention that the guests included Simon from S&A Scenics. Simon had produced much of the scenery on the table and if you are looking for high quality, reasonably priced ready made scenery, head over to his web store:

Also present was Ian of Irregular Miniatures. At the time I couldn’t remember ever coming across Ian’s company, which was strange as he has one of the largest range of figures in the UK, with scales ranging from 2mm to 75mm! However, when I returned home and checked out his web site I found that I had quite a few of his models in my collection!  I had bought them over the years at various shows and it was his Dad, not Ian, that had served me! Check out their web site below, there are some real gems to be found!

To close the report of a most enjoyable and memorable weekend, I must again thank the ‘Lancaster Boys’ for their invitation and in particular Mark for his amazing hospitality.

I hope that you all enjoy your hobby as much as I do – remember that our web site will have much of what you need and even better, we supply post free to most worldwide locations! Click here to see our shop: