We have been planning to add some packs of cavemen to our DeeZee range for about four years now! Part of the problem was finding a sculptor that I could actually sit down with and explain exactly what I had in mind. I’m just not comfortable with communicating via skype and other such modern technology. It was important for me to be able to sit with the sculptor and talk through the process. That problem was solved when Paul Matthews (our social media consultant) was able to introduce me to Matt Sofar of Knuckle Bone miniatures. Matt already had a small range of fantasy miniatures and was looking to do some freelance work to extend his portfolio. Even better, he was happy to come in and talk through the commission and provide a sample sculpt before we proceeded with the full commission. 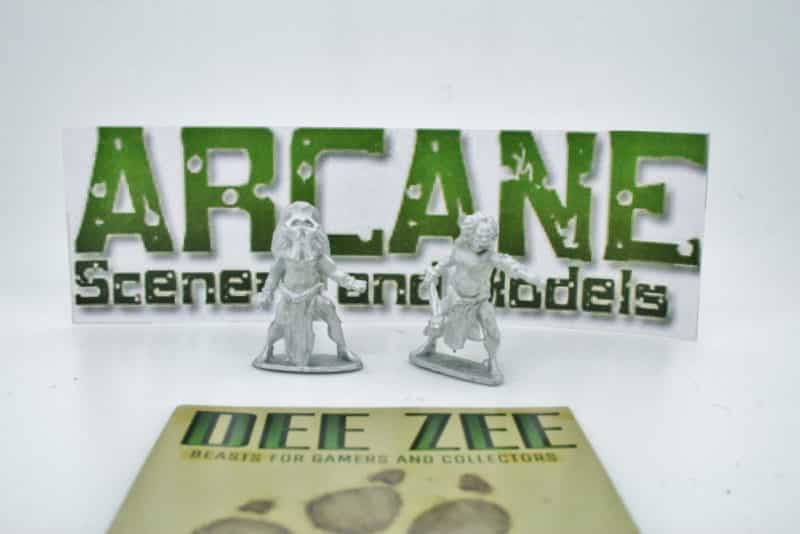 The original plan was for just 8 cave men – two packs of four but as Matt produced his sculpts we decided to go for a ‘command’ pack of the chief and Shaman and then two packs of four cavemen; ten figures in total. One pack would be hunting and thrusting with their spears, the other pack, stalking or walking as though part of the hunt. We have deliberately used  a generic title of ‘cavemen’ rather than specify the type. However, I hope that it is clear that we tended towards a more Neanderthal look, both in features and clothing. If all goes well, there will be other ‘tribes’ that we will add to the range. We also wanted to avoid the ‘ripped’ look of some depictions of cavemen. I’m a great fan of Frank Frezzetta and that genre but decided that we wanted our cavemen to look as though they were living on a feast or famine diet, mainly of meat and they didn’t have access to the local gym! As my brother kindly quipped, ‘did Matt use you as the model?…’ 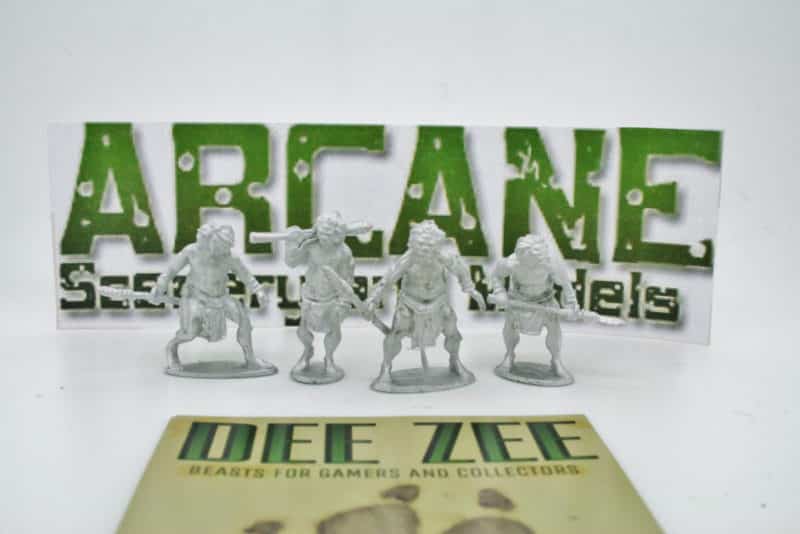 The models are made to fit with the existing DeeZee range and so are on the large size for 28mm figures but they all fit on a 25mm round base – ideal for a skirmish game. I suspect that they are too tall in reality – from what we know, cavemen tended to be shorter than todays human. We also made the chief slightly larger. He needs to be big to keep his place as the boss! 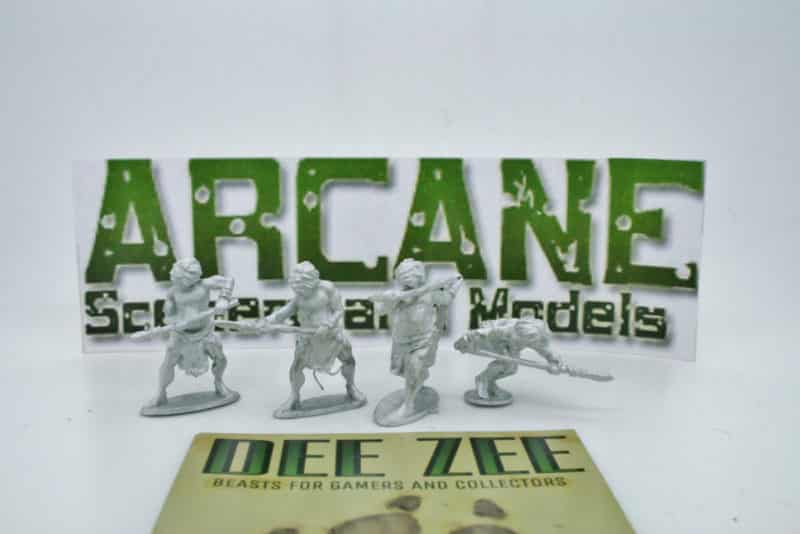 There are embryonic plans for a rules set to be used with the figures but these are a long way from being playable, never mind published but the three packs do make sense with what is written so far. It was of course essential to have a chief or leader and we thought that he needed an assistant. I had originally thought that this would be a ‘son’ type figure but Matt came up with the idea of a Shaman. We have probably stretched reality here a bit but the model does look cool, so a Shaman was added, complete with baby Mammoth or baby Brontetherium skull. 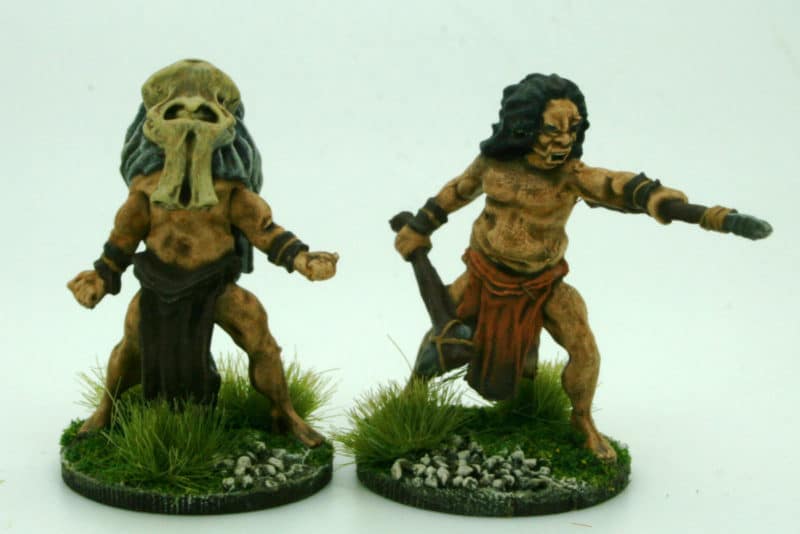 The other two packs are the Cave men attacking and Cave men hunting. As the sculpts progressed we decide to have a pack of cavemen that were clearly engaged in some sort of activity with their spears – whether hunting or fighting; and another group that were perhaps a bit more relaxed! 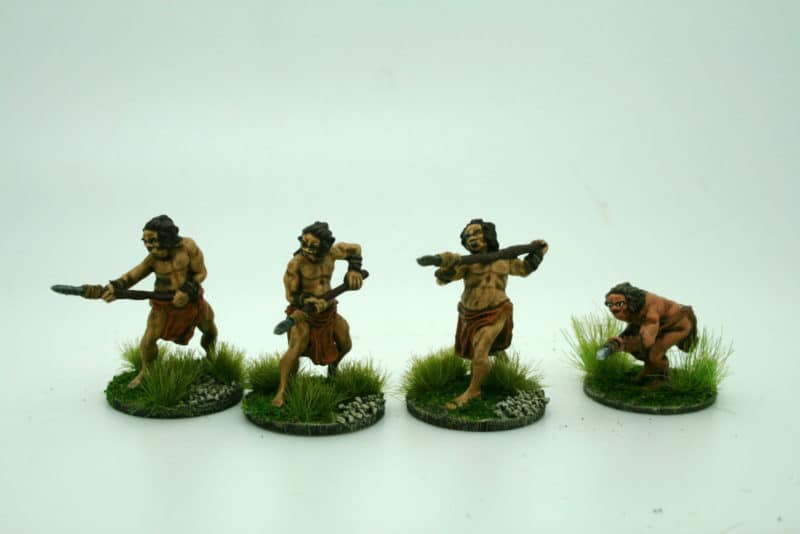 I think that Matt has done a great job with these attacking poses. These men are clearly trying to get their next dinner or fight off a rival tribe. I particularly like the one crouching down in the long grass! 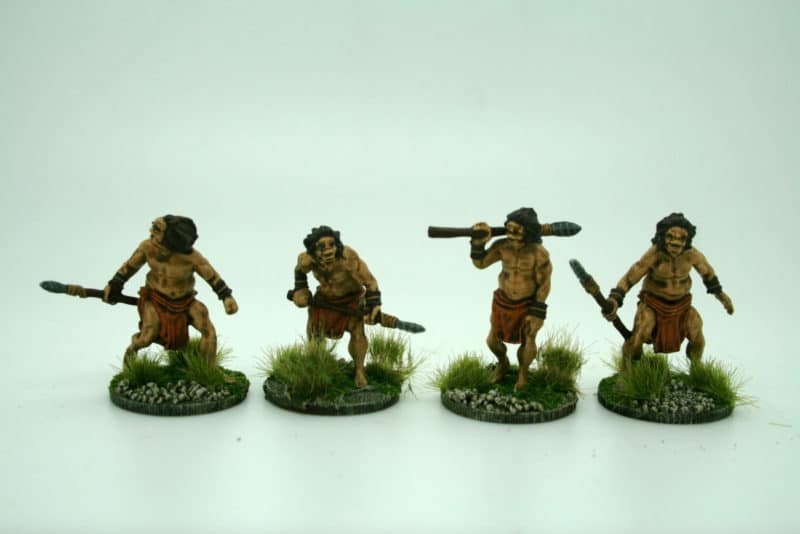 The cavemen hunting are meant to be walking or stalking as they make their way to find their dinner! My favourite is the guy with his spear over his shoulder, although the one looking over his shoulder would look great in a diorama with a Smilodon lurking in the background.

Once Matt had finished the sculpts, we went to our friends at Footsore to get the master molds and then the production molds made and the cavemen were ready to launch! The painted models above are my first attempt at painting them and I have tended to go for a simple paint job just to get them ready for the web store pictures. I’ll detail how I went about painting these in next weeks blog but in the meantime if you would like to have a go at painting them for you own ‘tribe’ just click the links below.

We do have plans for more cavemen in the future, both in terms of adding a few more characters to this tribe and producing another rival tribe. As always, much depends on how well these sell through and I am more tortoise than hare when it come to business these days…..BUT watch this space or at least follow us on Facebook to get the latest news!

You can buy all of the DeeZee models from the arcane scenery web store and at the time of writing we supply post free to most worldwide locations!

To see all of the DEEZEE range click here: