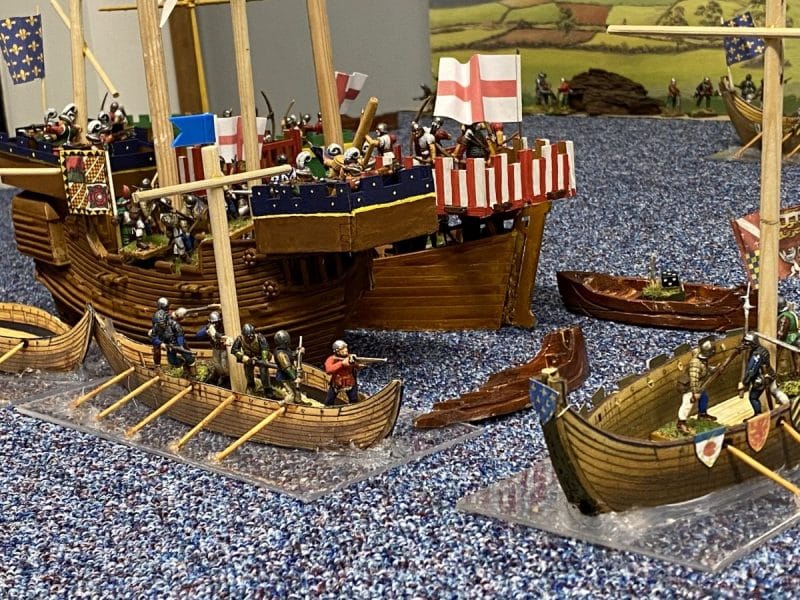 It’s almost a month since my last blog and my attention has been focused on a new project. My gaming buddy and ace rules writer Andy Callan has come up with a new variation of ‘Never Mind The Bill Hooks’ – ‘Never mind the Boat Hooks’. The game is based on Naval warfare in the middle ages and inspired somewhat by the Battle of Sulys that took place in 1340. Although this pre-dates the Wars of the Roses by some 100 years and in fact was part of the 100 years war, this type of Naval warfare continued for some time into the next century.

Henry V’s flag ship, Grace Dieu, launched in 1418, although one of the largest ships of her time, carried only 3 cannon and her design was primarily to allow the English to over come the formidable fleet of Genoa by providing a high platform for the archers to shoot down on the lower Carracks used by the Genoese. Towards the end of the 15th century, gun powder based technology began to become the prime armament but even Henry VIII’s flag ship, the Mary Rose, launched in 1511, still carried a number of archers as the secondary armament to the 78 – 91 guns on board. You can see from the picture that the high Forecastle and Stern Castle would facilitate fire down onto the enemy ships and the netting over the main deck ( which may have contributed to so many casualties when the ship foundered) was there to prevent boarding actions by the enemy.

So for a period in the late middle ages, the primary method of naval warfare was to grapple with the enemy ships and board them with a view to putting the enemy to the sword! In effect, a land battle fought on the decks of the ships. This allows the adaptation of the Never Mind The Bill Hooks rules to Sea Warfare, without too many changes to the basic rules engine.

The detail regarding fighting ship design for this period is about as comprehensive as the detail of the battles of the Wars of the Roses. That is to say, scant, at best! Much of what we know seems to be based on pictures from coins, pictures in manuscripts and carvings in churches. I have purchased the rather lovely book by Susan Rose ( no relation to Mary !) and whilst I am yet to read it properly, the summary seems to confirm that we are very much in the dark as to how Naval combat was fought in detail and how the ships were constructed or operated in battle.

However, before you can have a battle at sea, the first thing that you need is some ships! For the first play test, Andy made some ships up from wooden blocks and cardboard! As you can see, the ships looked pretty effective and not that far away from some of the contemporary illustrations and as a result we were able to play test the new rules.

I then realised the Sarissa Precision have a very nice medieval cog in their range! So it was time to start building a fleet! You can see my first attempt at building the Sarissa cog in the picture below. I replaced the original mast with a fighting top. The replacement mast is just a plug in piece so I can revert to the original if I please.

I also wanted to add some galley’s to my fleet but as there was no suitable kit, I decided to have a go at scratch building one. I tried looking for some sort of plan without much success but found plenty of picture references. In the end I decided to build something that looked like a galley and that would be practical when used on the table. The result is certainly not a scale model, nor is it based on an actual galley but is meant to be a representation of the sort of Galley to be found around that time. To be fair it is more like a Mediterranean Galley than an English one but I will use it as a Burgundian Mercenary crew!

As I’ve had no plans, I have to admit to making it up as I’ve gone along and I have made some more changes to the galley by adding some flags and a mast. I also have a second galley and cog on the work bench. I do intend to publish a step by step guide to making and painting both types of ships and I intend to make a more ‘English’ looking galley based on a Viking ship type hull.

For now, this Blog entry is more of a taster of the project than a detailed guide. If you fancy having a go at making the Sarissa Cog, I’ll put a link below. The good news is that should you decide that you want to have a go at building your own fleet, Peter Dennis will be releasing a selection of Medieval ships and Galleys in his Paper soldiers range, so you could build a fleet for a very reasonable outlay. I will also publish the plans to the galley along with a step by step guide as to how to make one, either on this blog or possibly in Wargames Illustrated Magazine. My balsa Galleys have cost less than a fiver to make!

I’ll also get a battle report from the next play test published that perhaps will give an idea of how ‘Bill Hooks’ rules work in a naval setting. One final thought. There’s no need to build or paint any more figures. We are just using the War of the Roses figures, as you can see. They may not be strictly accurate for some of the early period but the idea is just to have some fun!

To see our range of Never Mind The Bill Hooks merchandise click here:

To go straight to the Sarissa Cog, click here: