After Novembers paint challenge, I was expecting a drop off in my output. Finding just 30 minutes a day to paint, is in theory not too demanding a challenge but the assumption is that you are actually at home in the first place. With the onset of the festive season, I have been pulled away from my hobby by the various social activities and the many tasks that arise at this time of year. Work is also quite busy, so it’s not just about the time but also finding a clear space in my head so that I can focus on painting. My output has slowed and although I have yet another battalion on the work bench, it’s very much a work in progress as the picture below shows. 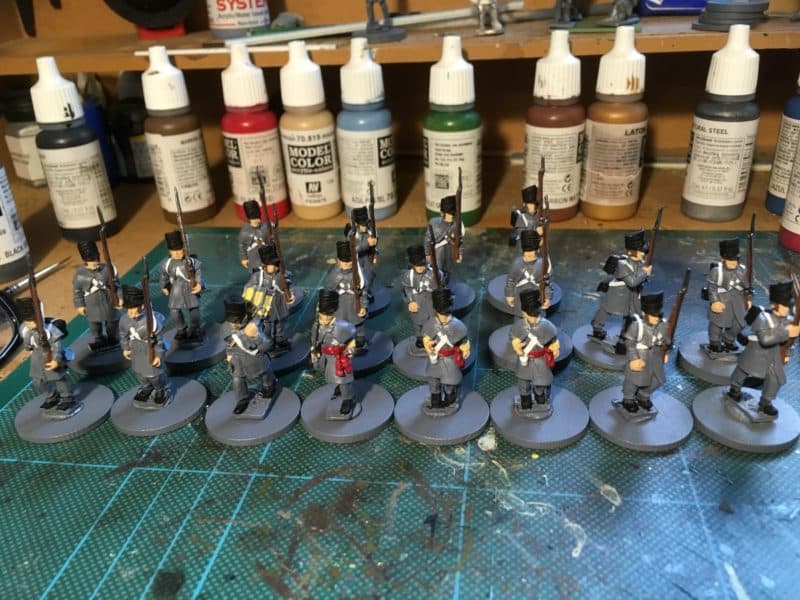 There is more to the hobby than just painting though! My regular Thursday nights gaming with my friends continues and last week Andy surprised us with a new army that he had picked up. Actually it was two armies, Union and Confederates from the American Civil war. So we played our first ACW battle using the ‘Glory Hallelujah’ Black Powder supplement rules.

The scenario was fairly simple, a Confederate force was to surprise and capture a Union Village, hold it’s ground and push the relieving Union force from the table. 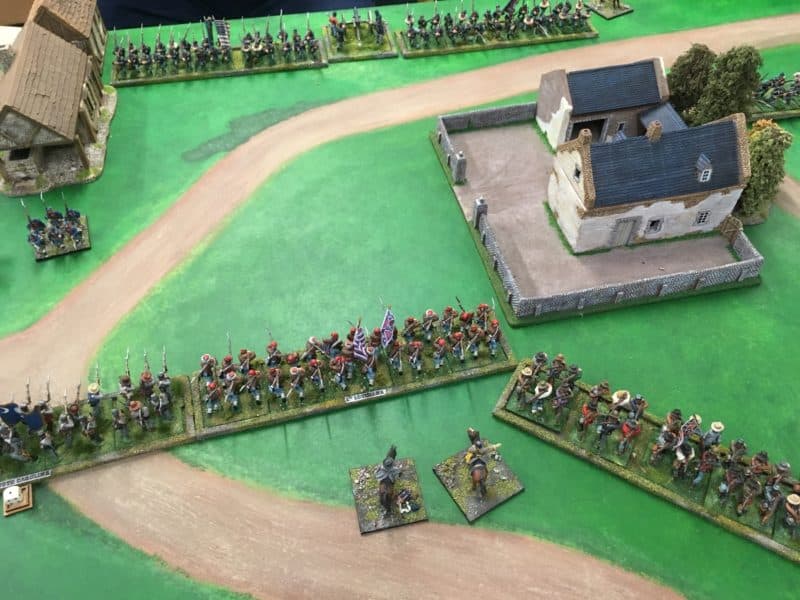 Confederates advance on the farmhouse

The battle initially went well for the rebels with a quick advance to the leading farm house on the right, securing a good platform to launch the attack on the village. However, the second Confederate Brigade on the left was slow to move in support and then surprisingly, found itself facing a superior Union force.

Although cavalry is not so effective in the ACW period as our usual Napoleonic games, the cavalry could skirmish quite effectively and a fast advance around the flank of the Confederates by a unit of Federal Cavalry was enough to cause consternation in the rebel ranks! 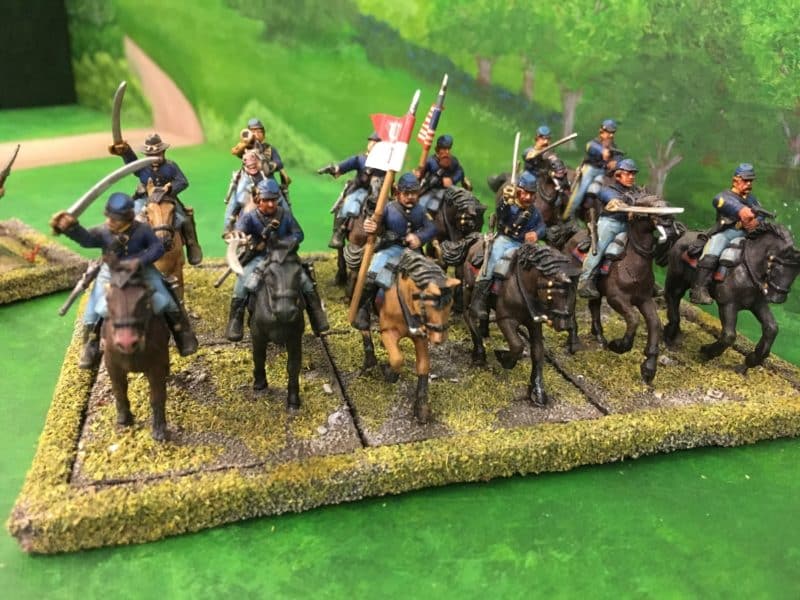 The Confederate response was to forge ahead and occupy the farm buildings but to detach a battalion to guard against a flank or rear attack by those sneaky Federal forces! 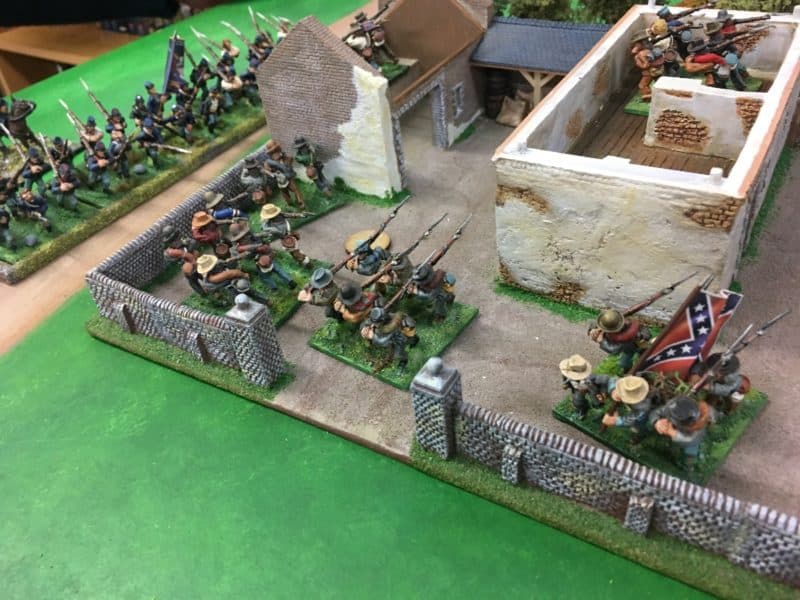 Sure enough, whilst the farm house became the centre of the battle on the left, the Union managed to slip around the sides, turning the Confederate flank. 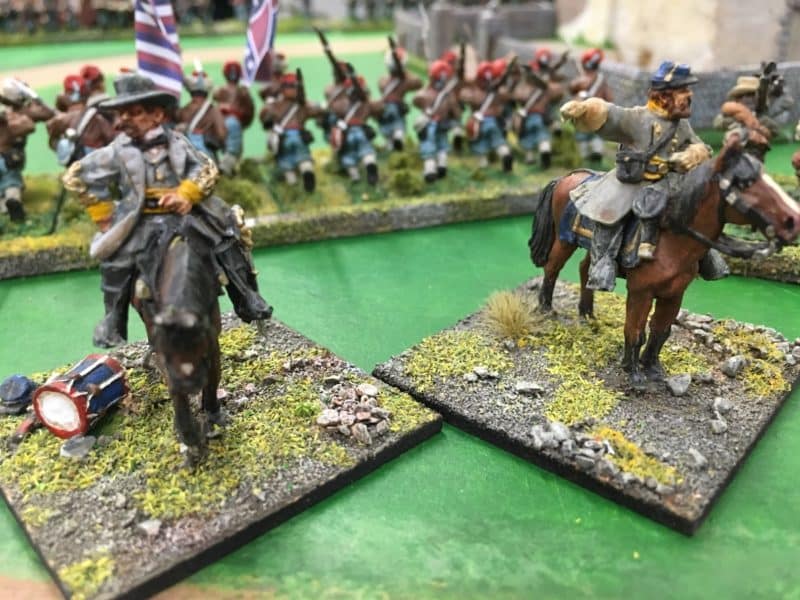 The Confederate commander urges the troops on the left to advance!

Meanwhile on the left of the field, the Confederates had pushed forwards, only to find that not only were they were facing a superior infantry force but were out gunned in artillery. Their advance was stopped dead! 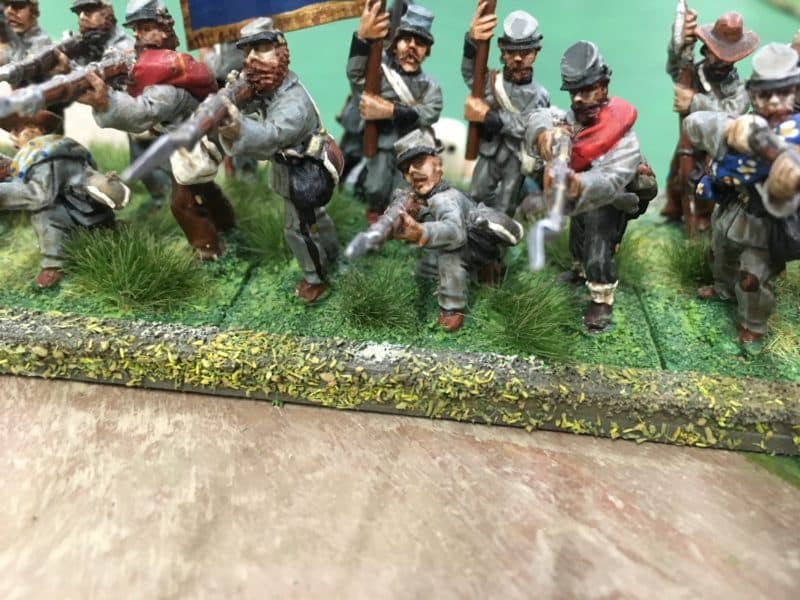 The federal move around the flank of the farm house was causing havoc and the Rebel battalion holding the rear found itself out numbered. They were ordered to stand firm what ever the cost! The Confederate strategy hinged on being able to defeat the Union forces just behind the Farmhouse so that they could push on into the unguarded village.  The Farm house was beginning to resemble the Alamo as Federal forces concentrated their artillery fire here. So with one battalion pinned in the Farm House and one protecting the rear of the brigade, the remaining forces were unable to create a local fire superiority. 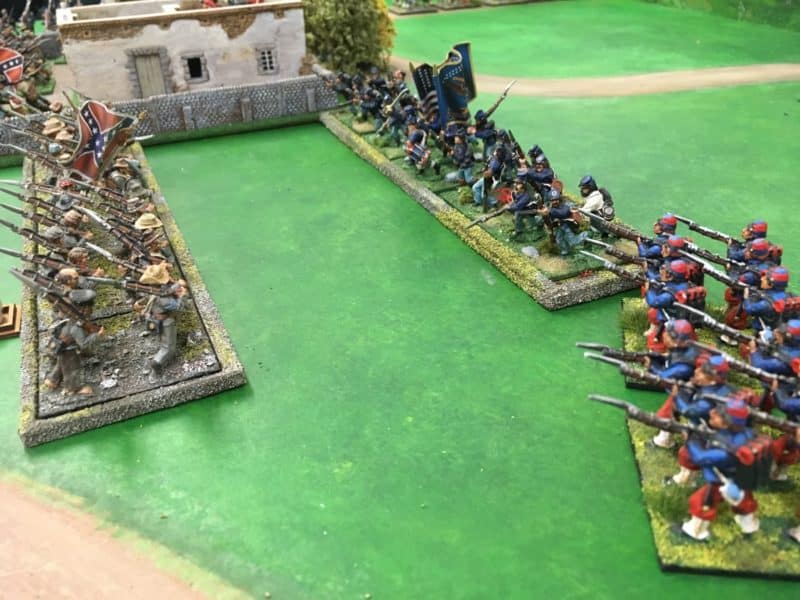 It was the end of the Confederate push. With the right flank stopped in it’s tracks and the Farm House about to fall, it was time for the Confederates to pull back. Their surprise attack had been thwarted! 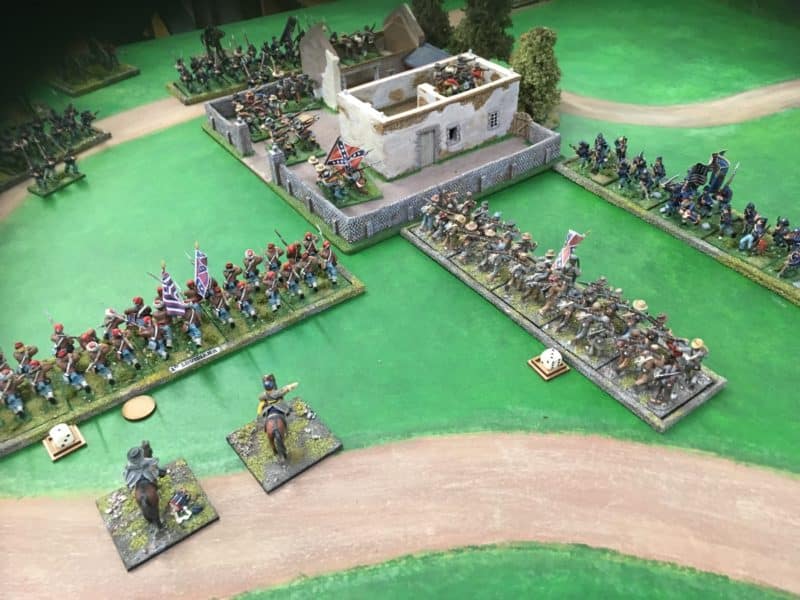 Shaken on the flank – those boys wont hold for much longer!

The game had ended with a Union victory. As our first foray into ACW gaming, using Black Powder Rules, we were pleasantly surprised at how just a few rules tweaks could give quite a different feel to the game. No doubt we missed some of the subtleties in the Glory Hallelujah! supplement but as a first attempt, it was a good introduction into the period. The question is, will we be tempted to start our own ACW armies?

If I do become beguiled by the ACW period, there’s no doubt that my first stop for troops will be the impressive Perry’s plastic range. You can see them here:

Of course, we have a massive range of wargaming, modeliing and painting accessories in our web store, all post free worldwide at the time of writing!