Perhaps not the most glamorous part of our hobby but a topic that has interested me for some time. I see an awful lot of questions on social media with regards to the best method of basing figures, this is usually referring to the number of figures per base or the base size rather than the landscaping! There is of course no definitive answer to the question as different rules sets will often require different basing requirements – not only the size of bases will vary but the shape (round or square) can vary. 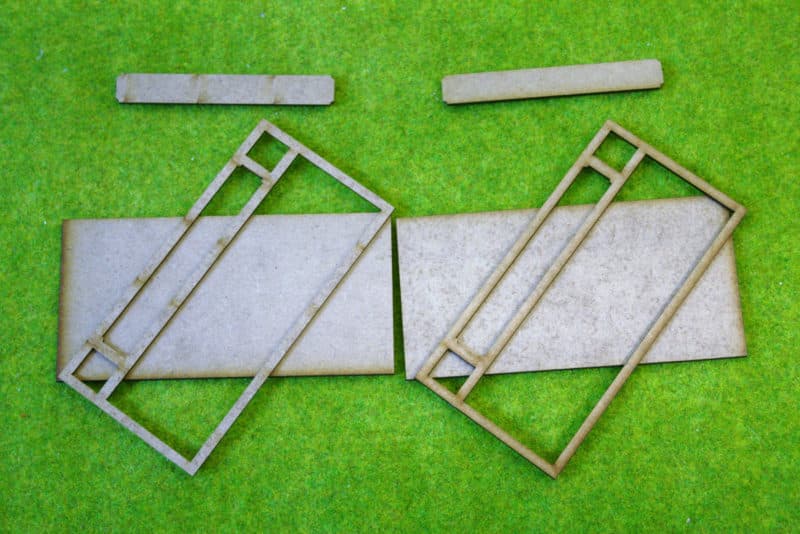 My new movement trays before assembly.

One solution is to use movement trays as a way of assembling units. This certainly helps bridge the gap between skirmish games, for example, Sharp Practice, and games that use larger units, say Black Powder. The problem is that by definition, the movement tray fixes the formation of your troops, making formation changes difficult duing the game. 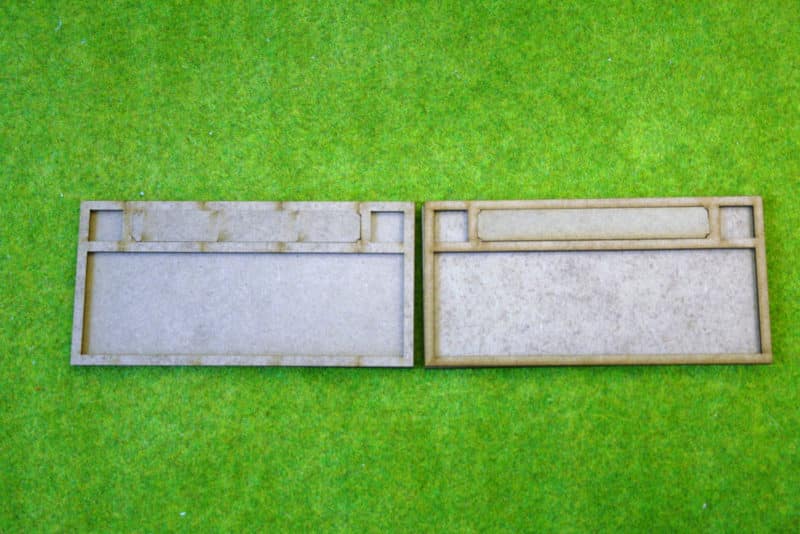 As my Napoleonic collection has grown, I also wanted a way of identifying the different battalions in my army. Yes, I know that they all have flags ( well most of them) but the more my battalions have grown, the harder it has become to remember who was who! So my solution was to design a movement tray system that allowed me to label my troops, but was flexible enough to facilitate different formations. The other benefit of movement trays is that they can help with transporting and organising your army.

As you can imagine, there was no simple solution and a compromise was required. This was made slightly easier by the fact that I play mostly Black Powder Napoleonic games, with the occasional foray into Sharp Practice! I came up with the following system, that has given me a degree of flexibility and solved some of the problems. 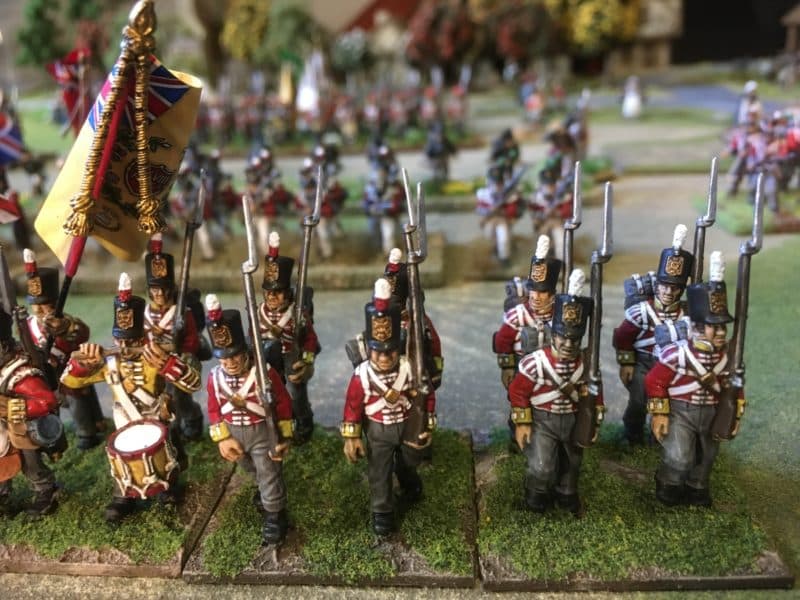 Grenadier Company based – four figures to a 40mm square base

First I decided to base all my Napoleonic infantry on 40mm square bases, four figures to a base. That said, some of my figures, usually the flank company’s, are based  singly on 20mm square bases. This gives me some single figures to use for skirmish games if I need them. I’ve then built my Battalions in 12’s for a small unit, 24 for a standard unit and 36 for a large unit. However, the movement trays are designed to take 12 figures, so a standard unit will need two trays. 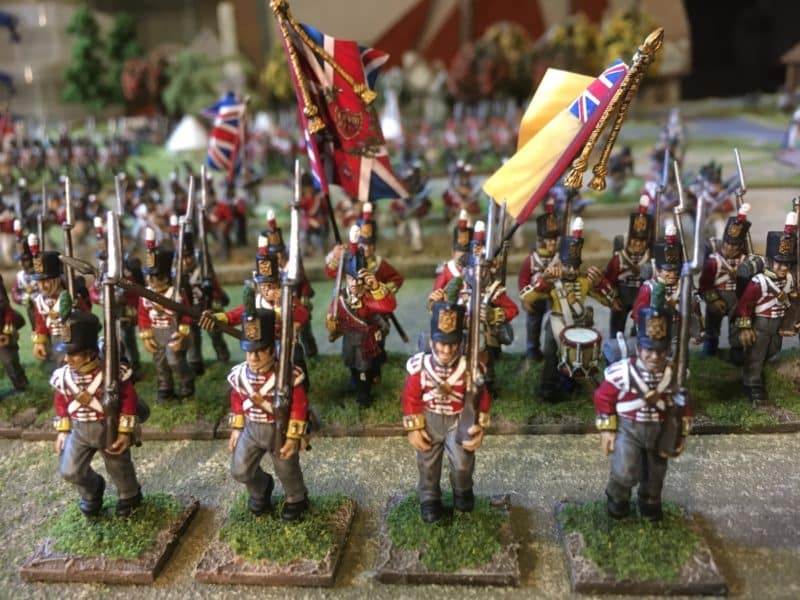 This has the benefit of allowing me to split the unit into two, facilitating most formation changes but also allowing me to field the Battalion as two units of 12 for small club night battles. My new movement trays also have a name plate at the back allowing me to label each battalion. I was lucky with the design – the name plate is exactly the same width as a Dymo electric label printer, making labelling very straight forward. There are also two cut outs per trays to use for disorder and casualty markers – a simple 12mm D6 is used, different colours can mean different results according to the game being played. This allows any disorders or casualties to move with the unit rather than get left behind on the table as is sometimes the case. 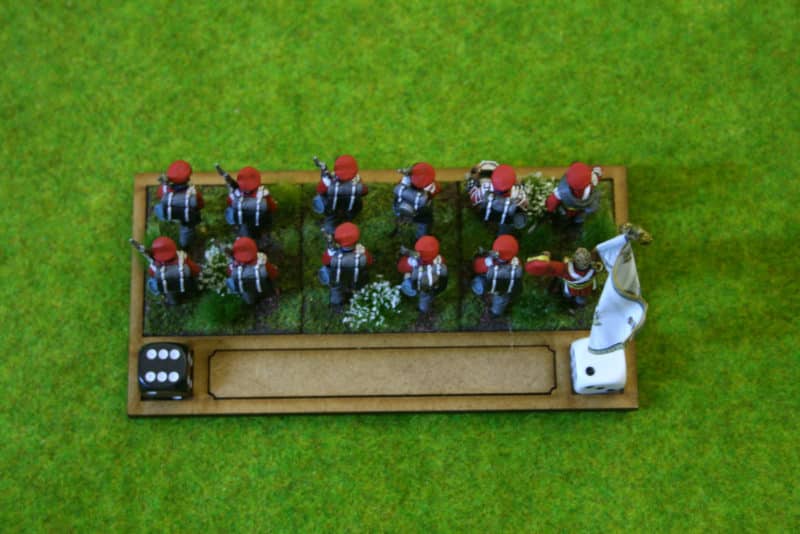 I decided that I wanted to ‘landscape’ the trays to help them blend into the gaming table. Some of my colleagues prefer to leave the trays as they are – it again is a question of taste. There is another advantage to texturing the trays. It covers any imperfections when assembled but more importantly helps to hide any differences in basing on the troops. I have been building my Napoleonic army over six years now and occasionally have strayed from my standard basing formula, which any way has evolved as I have found new products to use. 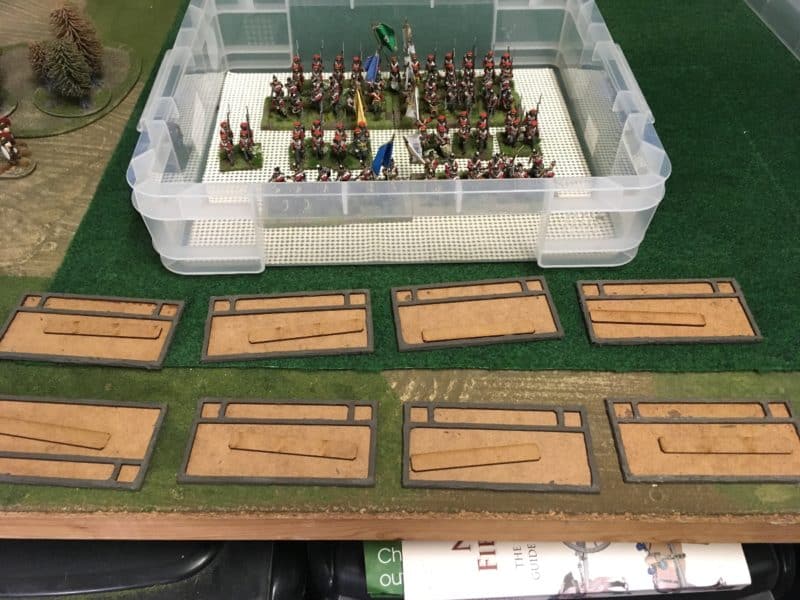 To achieve a textured effect I simply coat the assembled trays with Vallejo Dark Earth textured paste as in the picture above. Once this is dry, I just run a sharp scalpel around the edges to tidy things up and remove any excess. It is then a case of painting with your preferred basing colour ( mine is Vallejo Chocolate Brown) and then dry brushing with a lighter mix to bring out the texture. Once the painting is dry, I add patches of green scatter ( woodlands scenic is now my preferred choice) and the trays are ready for use. 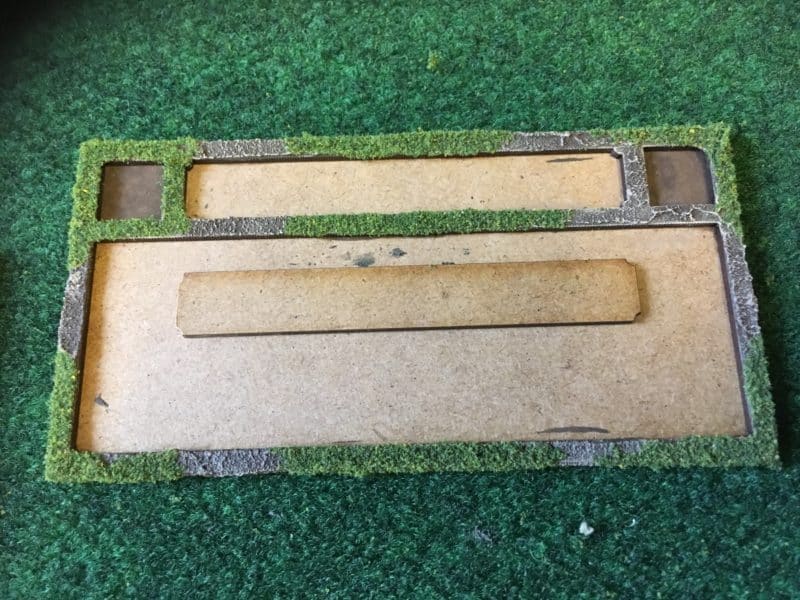 Movement tray textured and ready for use!

When it came to labelling, I decided on using the regiment name and number and only will indicate the Battalion number if there was more than one Battalion in service. It keeps things simple and allows me to use the largest font available for most of the labels. I used the Dymo Electric label printer to produce the labels on clear label material. As I said, I was lucky that the width matched my design exactly. The label maker was surprisingly inexpensive – just £14.99 from Aldi! 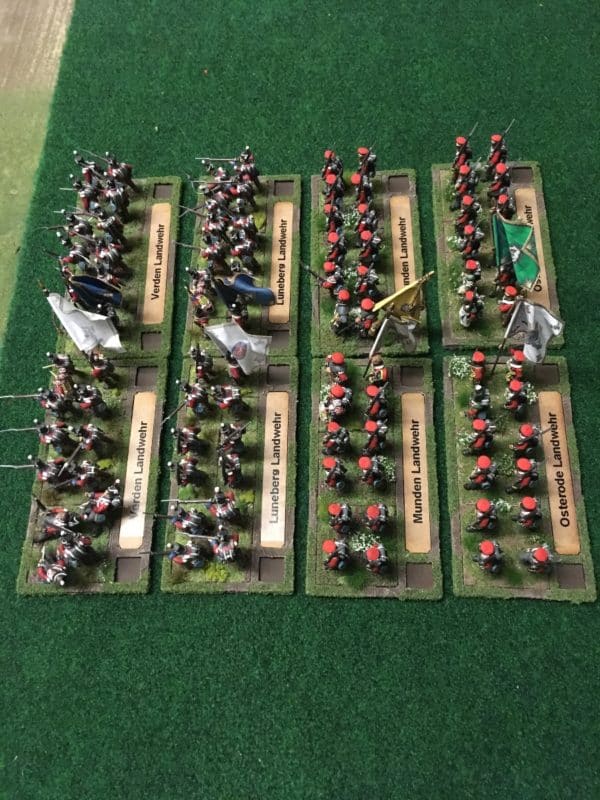 Of course the name plate is reversible, so if I decide to change the style – perhaps for a painted plate, I can do so! 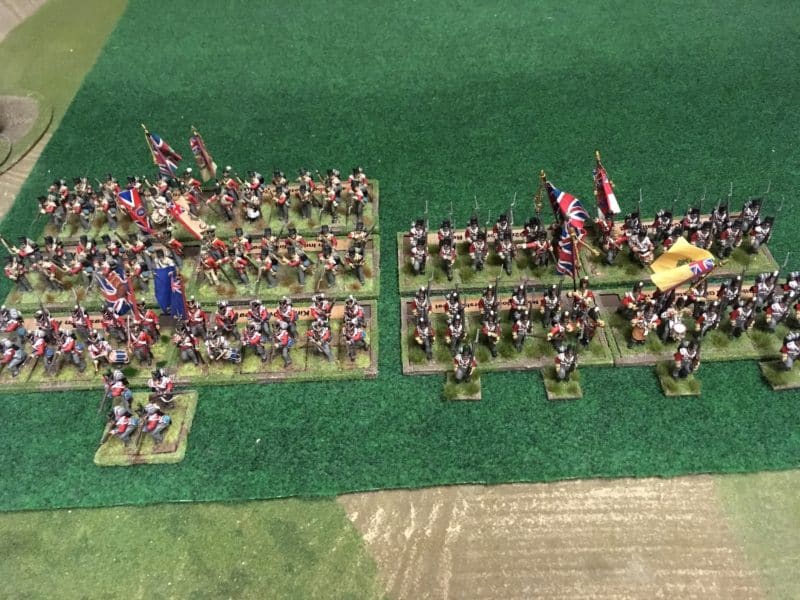 As you can see, from the front the name plates aren’t too intrusive, so my opponent shouldn’t be too distracted from the game. Another unintended benefit is that the name plate at the rear of the tray protects the bayonets of the units behind, helping to prevent damage. 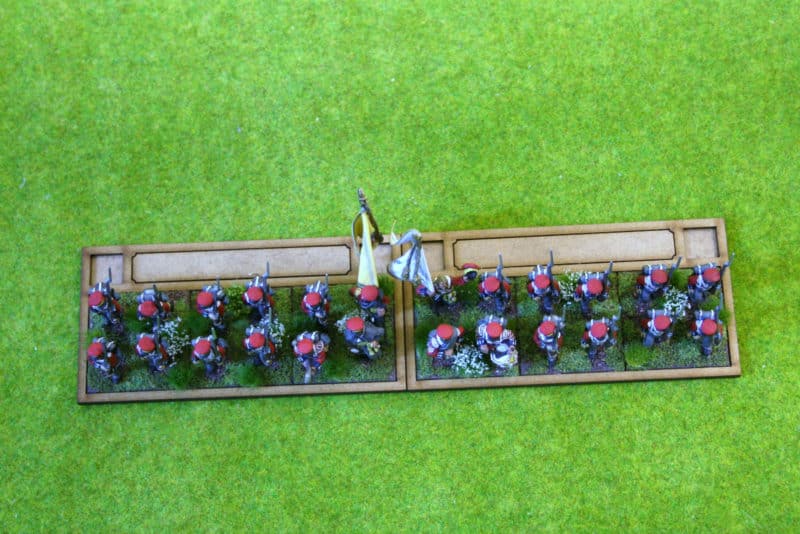 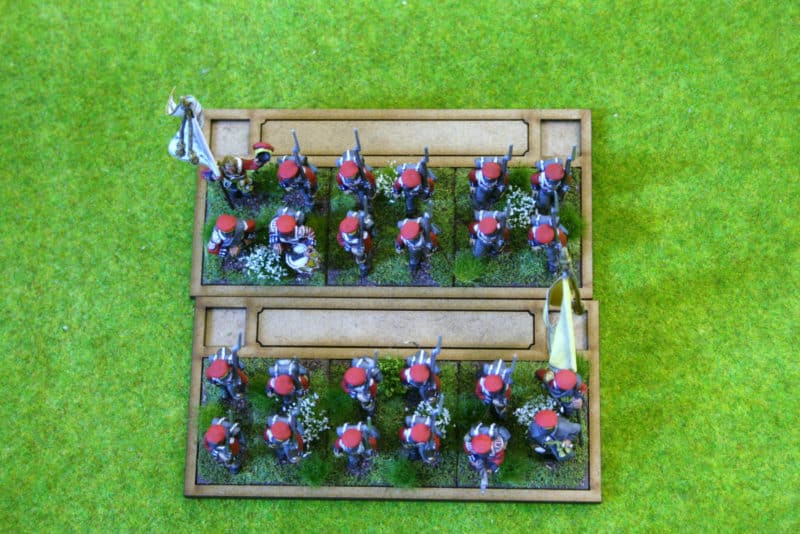 So the task now is to get all of my units into these trays. With nine battalions done, I still have another nine battalions, or eighteen trays to do, but it will be a nice project to do in between painting yet more battalions!

If you would like to use these trays, they are available from my shop here:

We also have quite a range of movement trays and bases here:

For Woodlands scenic scatter and other scenic accessories, click here:

At the time of writing all of these products are supplied post free to most world wide locations!