A somewhat appropriate combination you may think, but merely coincidence that I am reading one and watching the other! I will explain more later. My Artillery Autumn is still rumbling on and to be honest, I have been suffering from painting fatigue. To be fair, painting yellow is always difficult but trying to paint yellow piping and lace has left me somewhat frustrated. I had forgotten how difficult it is and this probably explains why it has taken so long to add to my artillery collection. 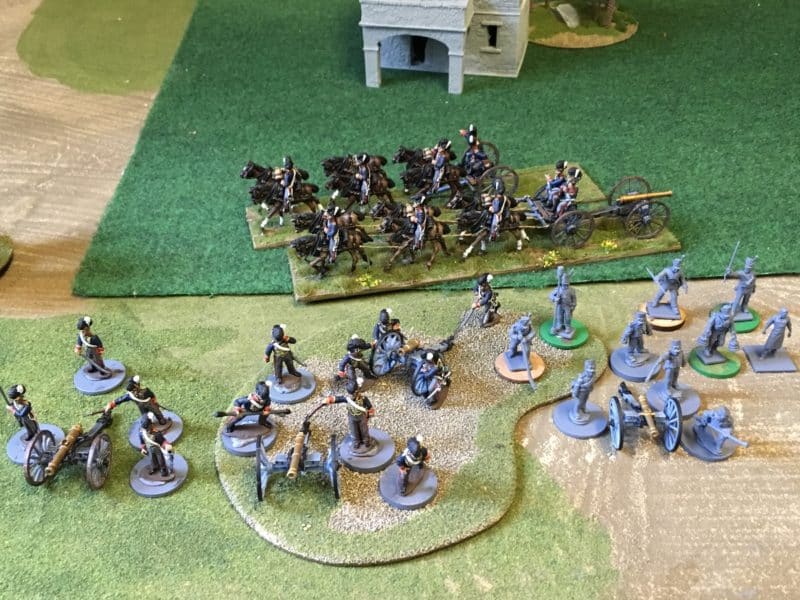 Nevertheless, I am making slow progress, with three horse artillery crews now painted and awaiting basing. Also on the go and nearing completion are the three cannon to go with them. As usual, I am block painting the figures, then painting over with Army painter quick shade, coating with matt varnish and finishing by re painting the lighter colours and metallics. Oh Joy! This means that I have actually painted most of the piping and lace in yellow twice to try to make it stand out. 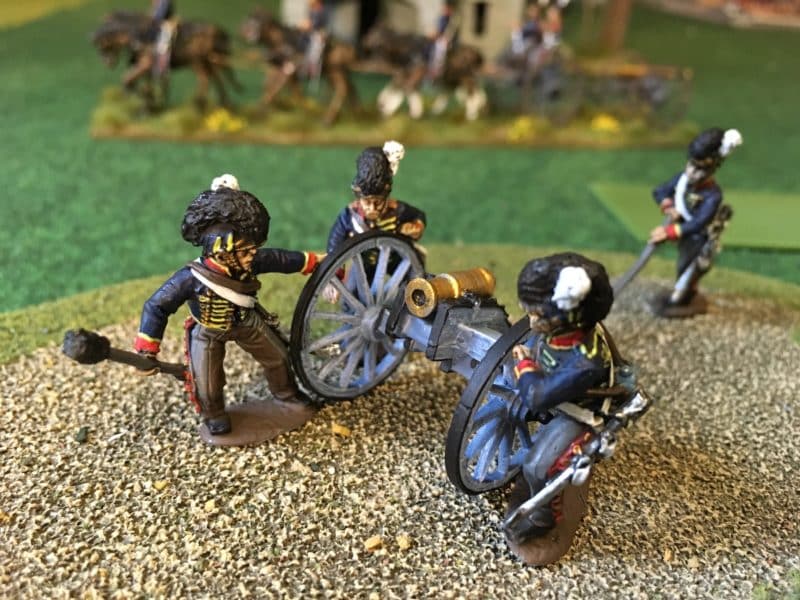 Some of the lace work doesn’t bear close scrutiny but from a distance, the figures are looking OK. Once they are based with the cannon, I think that I will be happy with them. 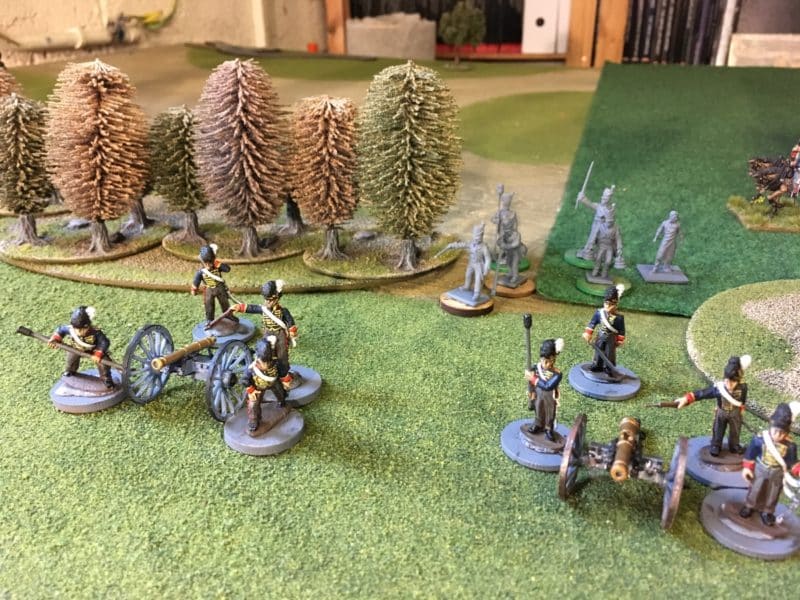 Painting yellow is always fraught with difficulties. I have tried undercoating with white first, and Orange and sand yellow ( which is almost acceptable on it’s own) and I have tried many different manufacturers to find a yellow that covers in one coat – Vallejo is the best that I have used, albeit with some difficulties.

The cannon are also still in progress. I’ve stuck to my original method and paint scheme despite reservations as to how ‘accurate’ it may be. However, I have taken on board comments made regarding the wheel rims and despite initially painting them black, along with the other iron work, I will heavily dry brush with natural steel. I’ll also apply a light weathering of ‘mud’ to the wheels and spokes.

You will see from the pictures that I have some foot Artillery crew also waiting for their turn on the paint station. Whilst my painting mojo is being severely tested, I have decided to plough on regardless and finish all the artillery that I think that I will need for my army over the next month or so. I am being ‘helped’ by both my current reading and of all things, a drama on TV. 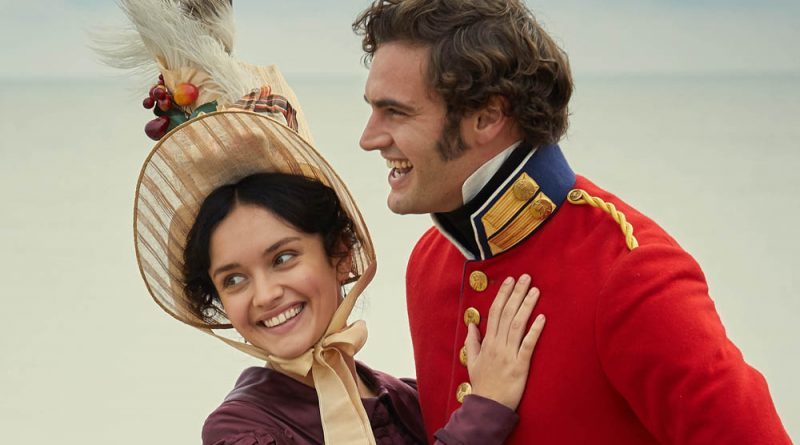 I knew that Vanity Fair was set around the Battle of Waterloo but most TV productions have ignored the battle. So I thought that this was a program more likely to appeal to Mrs W than to me. However, to my surprise, I have very much enjoyed it. The costumes and uniforms look fantastic (as do those wearing them), the acting is excellent ( Martin Clunes steals the show for me) and the modern take on the story has worked very well as far as I am concerned – even the soundtrack is excellent. The new ITV production has very much included the battle, with some excellent action. The scene where the infantry form square to fight off the Cuirassiers was excellent. I know some have raised eyebrows at the fact that the dismounted Cuirassiers attempted to press home their attack on foot but I wondered if it did happen. Who knows? What does one do when the blood lust is up, you’ve had your horse shot from beneath you and the bastard that did it is loading his gun ready for the next shot. Running away clearly isn’t going to work….

As if this wasn’t good enough, the next battle scene showed the French Old Guard, in all their glory, marching up what they thought was a deserted hill, only for the English to stand up and pour fire into them. Well, my imagination went into overdrive and I couldn’t wait to get back to painting my army! 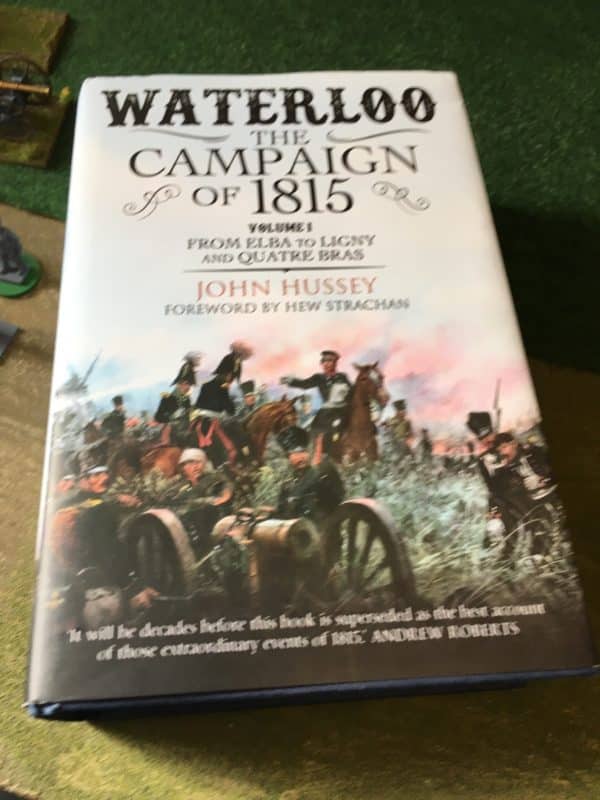 On a more serious note, I am currently working my way through John Hussey’s first volume of the Waterloo campaign. There’s very little action in it so far – having reached page 373, we are just at the 15th June 1815 and the first encounters between the French and Prussians. BUT John Hussey has done a superb job with his forensic research and analysis of the campaign. Having read many accounts of the battles of Quatre Bras and Waterloo, so far, this book has been the best that I have read in helping me to understand how and why the battles took place.

This isn’t the place for me to do a full review but one rather simplistic impression stands out. If Wellington was trying to herd Cats to get the allies in place to fight Napoleon, Napoleon at times seemed to be herding snakes! There’s no evidence of a conspiracy in the French camp – they just don’t seem to like each other! Once again, each time I read a chapter, I am inspired to get painting again. I want my army ready to fight the French! 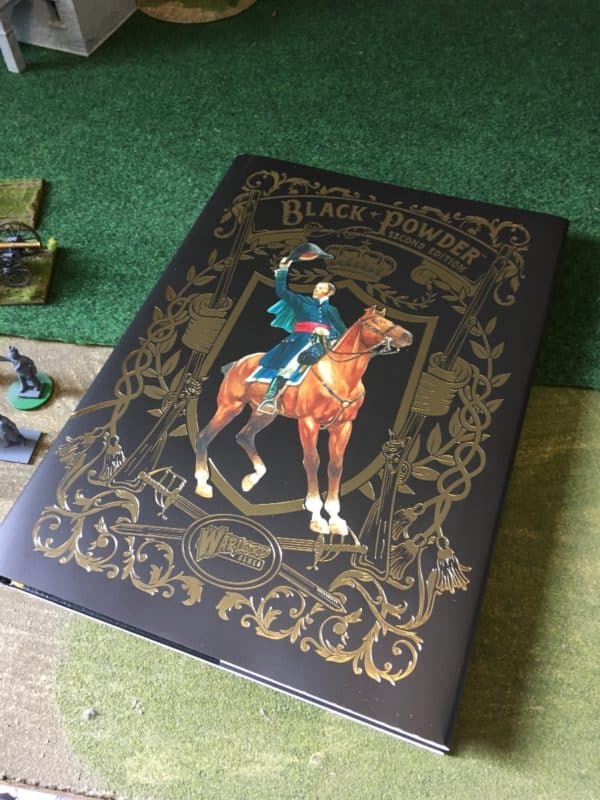 Finally, my copy of Black Powder 2ed. has arrived. Just in time to provide a tonic for the troops! I’d better get painting! 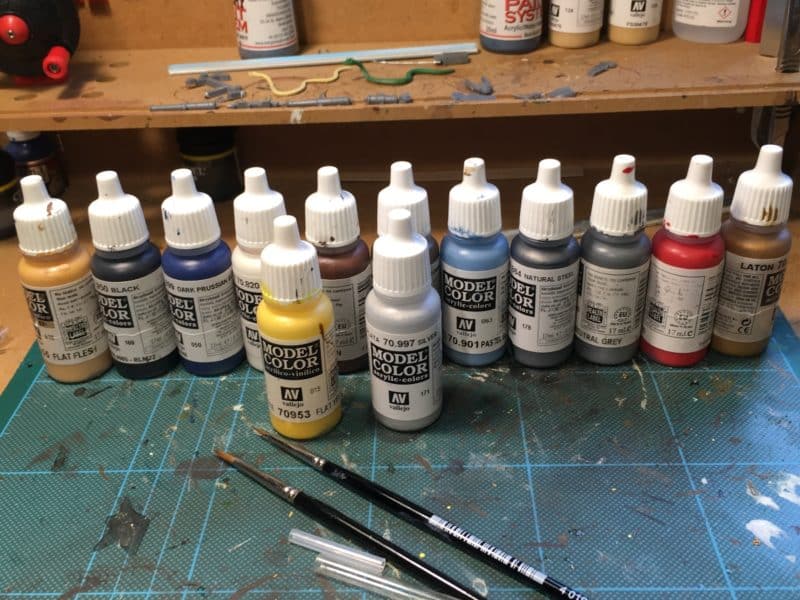 Back to painting – the colours that I have used for the Royal Horse artillery are as follows:

All of the paints used are available post free from my shop here:

At the time of writing, you can still pre order Black Powder second edition through my shop and get the free figure and of course it will be sent out post free on 6th October, the official launch date. Hurry up though, I am running out of the preorder stock with the figures!