In what could be the last battle with the ‘old’ Black Powder rules set before the relaunch of the new version on the 6th October, I faced off against my long term gaming buddy Pete Harris in his new gaming room. We are both great fans of the Black powder rules set, having fought many a battle with them and enjoyed the easy going social atmosphere that the rules set bring to our games. We tend to play the ‘Vanilla version’ with very few of the extra rules from the supplements. We find that this makes for a simpler, fairer game, with less need to refer back to the rule book and fewer contentious issues to resolve. Our games are played in the course of an evening, on a smaller 6 x 4 or 8 x 4 foot table and so we use 66% movement and ranging distances. We also use half size units on the smaller tables for these ‘club’ battles. My British Battalions are actually split into 2 x 12’s, two units for the price of one! Pete has organised his French infantry into 16’s for club battles – the French are more likely to form column and 16’s look nicer. Cavalry are 6 per regiment, we simply split the full regiment of 12 for the club games. We still use one gun for our artillery but when we do get the chance to play larger battles, then we find that batteries of two guns look nice! Once on the table, there are enough figures to give the ‘feel’ of a decent sized battle but there is still space for the armies to  manoeuvre. 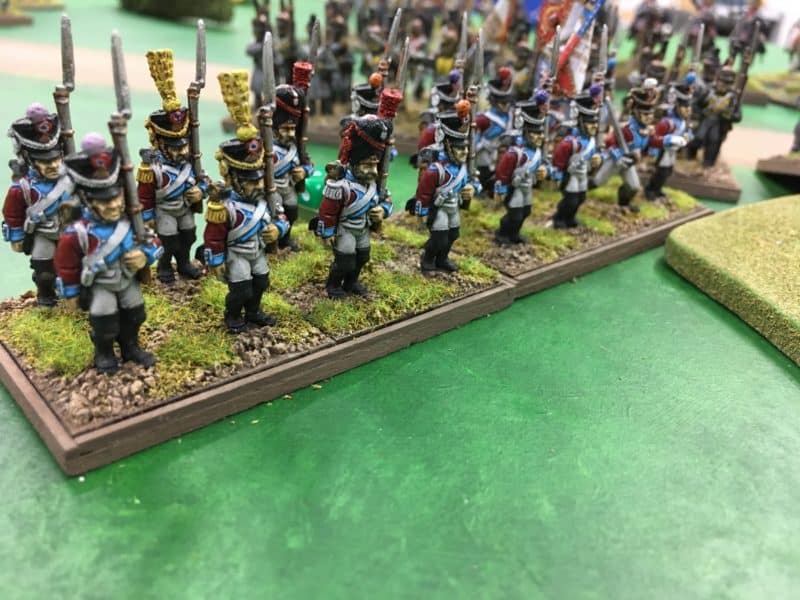 French Army deploy into line after a rapid advance.

The only flavour that we have added to the basic game is to Give the French ‘Pas de Charge’ which effectively means that a level 8 general will pass orders for infantry columns on a 10. The British get first fire for their battalions but must fight in line. We do not give the Brit’s counter charge, or use any other of the rules in Albion Triumphant. These two simple changes are enough to ensure that the French will tend to be quicker to move around on the Battlefield and the British will tend to fight a more defensive battle. 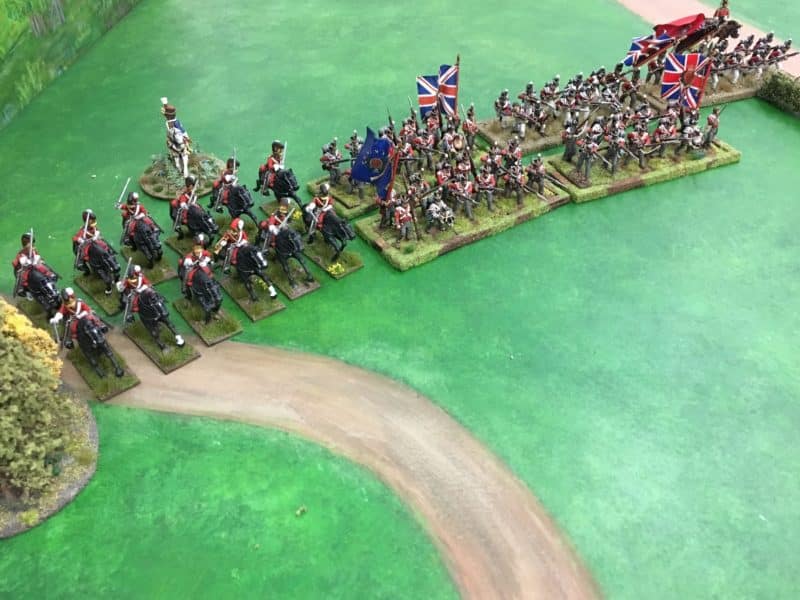 The British Heavy Cavalry Brigade and the First Infantry Brigade.

Another change is our points system. It is very much simplified with standard Infantry battalions and Light Cavalry worth 2 points, Artillery 1.5 points, Lancers 2.5 points, Heavy Cavalry 2.5 pts. Add one point for D3 Heavy cavalry, Add 0.5 point for light Infantry, add 0.5 point for rifles. We also adjust by a point or so for elites, large units, small units etc. It is by no means a perfect system and how we got to those values is lost in the mists of time. However, it works and allows us to bring approximately equal forces or if required, deliberately unbalance the forces. For our battle tonight, Pete had 30.5 points and I had 31 points. This gave us both 2 Brigades of infantry and one Brigade of cavalry. If that sounds as though the forces were identical, the detail will show that this is not quite the case. For example, Petes’ cavalry brigade consisted of two regiments of Lancers and one regiment of light Chasseurs plus a Horse artillery gun. I had two regiments of Household heavy cavalry. There were other differences in the make up of our Infantry Brigades but I wont detail them here. You can see our original points system in an older blog here:

There’s one other rule we usually follow for a club night battle – we go off to the pub for a nice meal and a drink before settling down to play – We find this helps to put everyone in the right frame of mind! We don’t like to battle on an empty stomach! 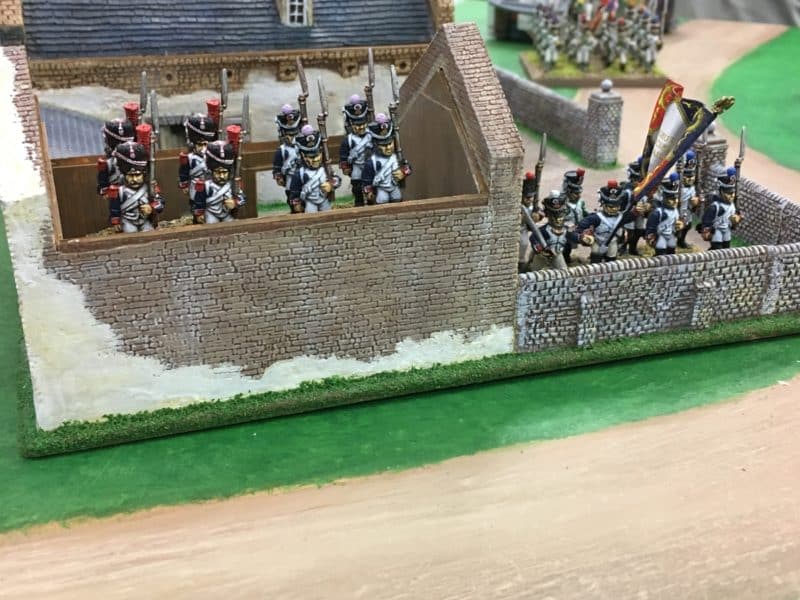 The French won the initiative and immediately advanced to capture the Farm house on the British Left. The general push forward saw them advancing on the Central pass between the hill and lake and attempting to capture the large hill that would dominate the battle. The British in reply decided that the French could have the Farm complex and moved their army to the open ground on the right. This would allow them to flank the French with the heavy Cavalry brigade and a strong infantry brigade, leaving the Rifles to defend the left wing and the rest of the brigade to hold the central pass. 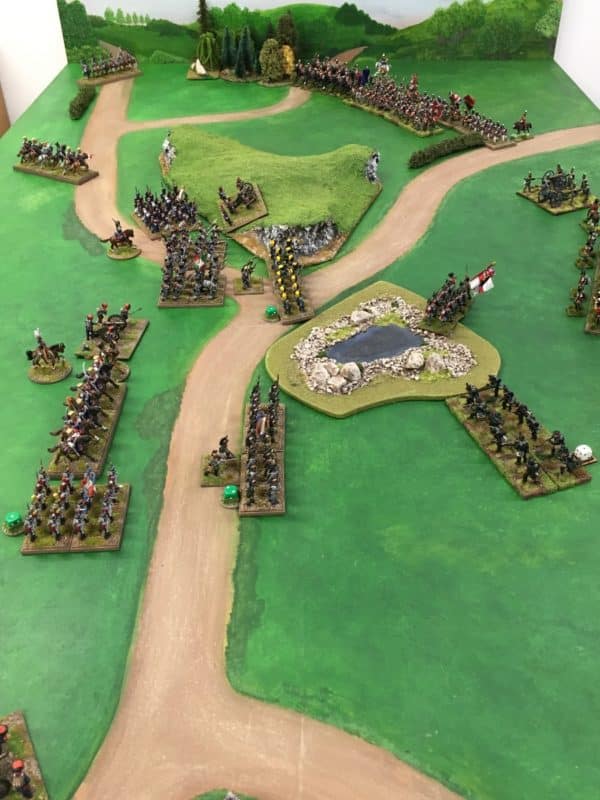 British Move to the right

It was now that the French ran into trouble. The artillery battery trying to gain a dominant position on the hill stalled, failing it’s orders to move thereby hampering the rest of the French brigade from moving. A blunder on the left also meant the the other brigade was not moving. Even though the French Commander was able to intervene, the French were unable to fully implement their plans. The Brigade on the far left was now playing catch up in pursuing the British, whilst the French cavalry were divided and vulnerable on the right. 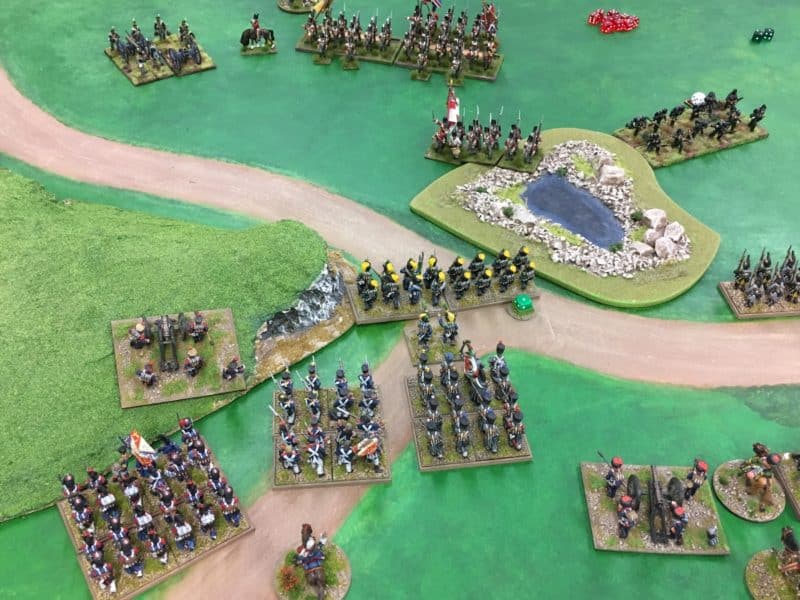 The British Cavalry seized the initiative and the full Brigade charged a regiment of French Lancers. The ensuing combat saw the Lancers shaken and withdrawing in disorder. Although the lead British cavalry regiment had taken wounds, it was still able to follow up and charge the French Light Chasseurs. The resulting combat saw them forced from the table and the French Cavalry Brigade were now broken.

On the left, the Rifles had taken a pounding and before too long, they were unable to stand the pressure exerted by the full French Brigade on the left, resulting in them breaking and leaving the table. They had bought just enough time for the British to bring reinforcements to the centre to hold the pass and rout the lead French infantry unit. 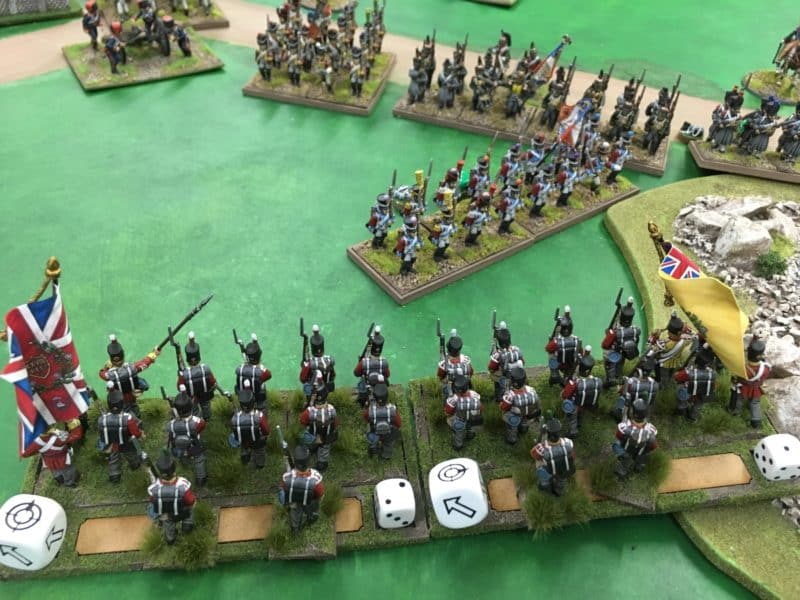 The British Left under pressure. Can they hold?

For 5 turns, the French Artillery unit attempting to ascend to the top of the hill failed it’s orders, stalling the brigade and frustrating the French army in its attempt to dominate the centre of the Battlefield, whilst the British continued to press from the right. The French Commander was heard to shout ‘must I do everything myself?’ in frustration, as order after order was failed by his brigade commanders! 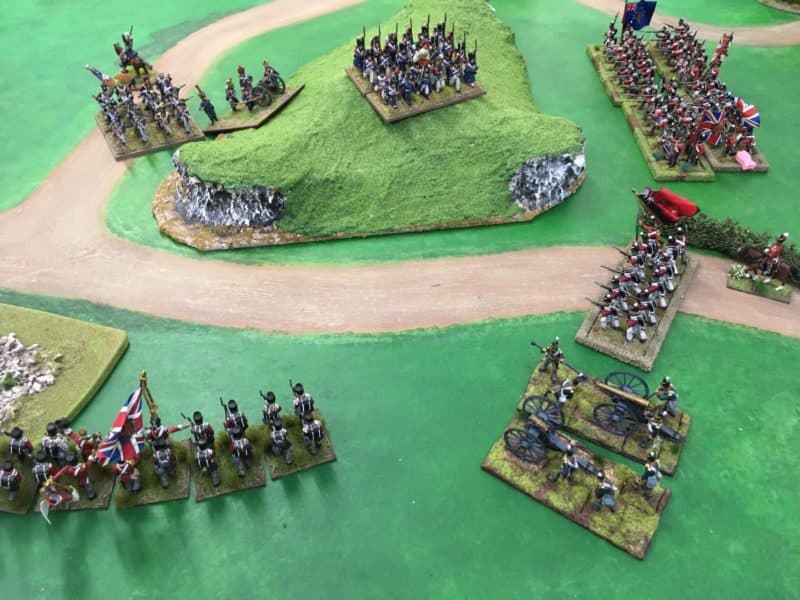 With the artillery stalled on the hill, the French infantry march into a trap!

Eventually, the large French infantry unit ascended the hill only to find that they were in the jaws of a trap and facing two gun battery’s and five battalions of British infantry. They too were routed. With the British Heavy Cavalry now rested, they were now threatening the rear of the French army. Although the French were taking a heavy toll of the British brigade on the left, the game was up for the French. The Second Infantry brigade was broken and the Army decide to pull back, leaving the British in control of the field! 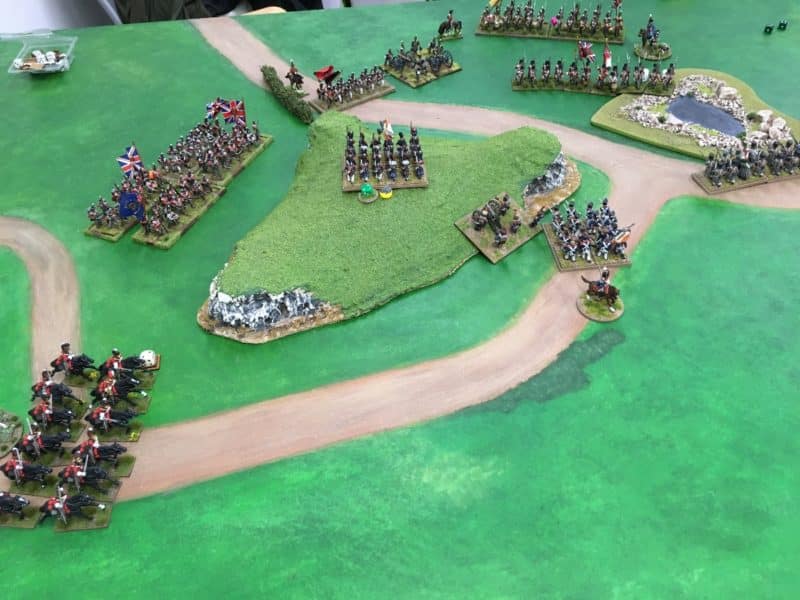 Once the French had captured the farmhouse it was pointless to try and challenge on the left. It is difficult to take on infantry in fortified positions, so a move to the right was inevitable for the British. The surprise was how effectively the British were able to execute their orders. Conversely, the French had appalling luck with their orders rolls, leaving the commander to pick up the pieces and do the best he could. This gave the British the opportunity to exploit their numerical superiority on the right flank, whilst holding the majority of the French infantry on the left and in the centre. For once, the British Heavy Cavalry did as ordered and were more than a match for the Lancers. The real bonus was catching the French lights on the edge of the table, they were always going to loose the combat and get pushed back from the field of battle. With the French Cavalry gone, the British were free to move their infantry without threat. 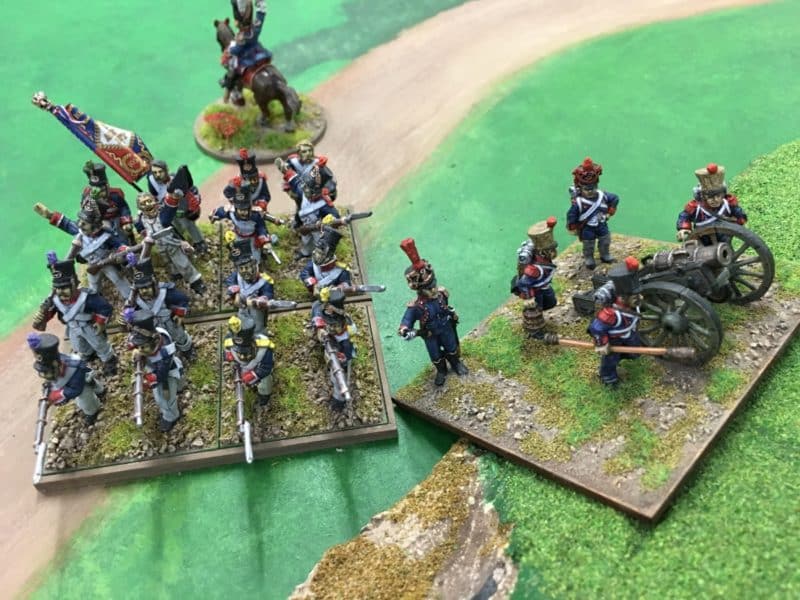 The French gave the British Brigade on the left a good mauling, breaking them in the final turn but it was too late to save the battle. The French commander was going to have a serious talk with his Brigadiers! 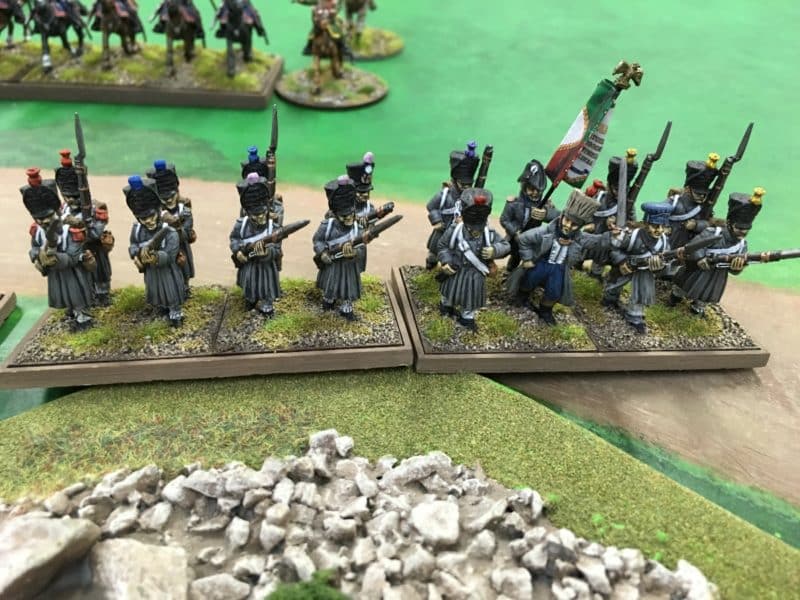 French Infantry advance. These guys did their job!

It’s nice to win a battle but in fairness to Pete, I should point out that the last time our forces met, he trounced my army in three turns! The dice gods can be very fickle!

It’s no secret that I am a great fan of the Black Powder Rules set. I think that it facilitates a great game without losing sight of the fact that the hobby is about having fun with friends whilst playing with toy soldiers. 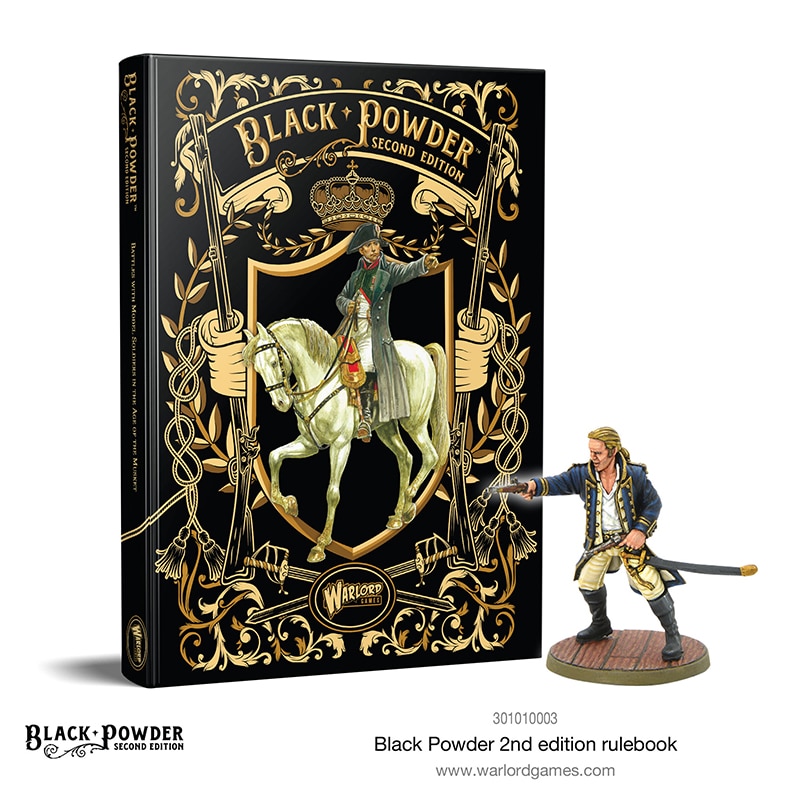 The new version of Black Powder is due to be released in Early October, provisionally on the 6th. If you would like a copy post free, with the exclusive miniature then simply click here!