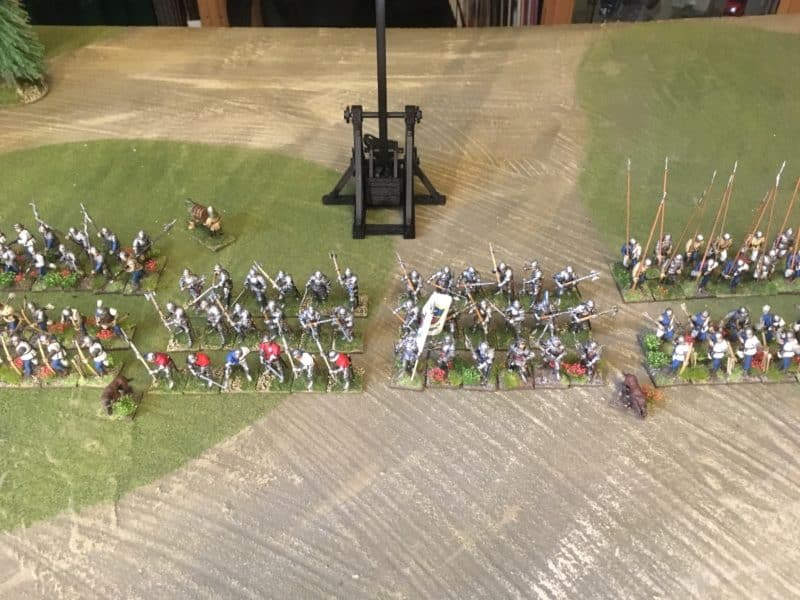 I now have about 100 figures completed for my WOTR army. Actually, completed is not strictly accurate, as six need basing and I want to revisit some of the Men at Arms to add some detail. The Foot Knights will form the core of my army and they are made from a box of Perry’s Foot knights that I have almost completed. Of the 36 knights in the box, 24 are in ‘plain’ armour and so were quite straight forward to paint. A further 12 have tabards over their armour and it was these that initially slowed me down when it came to completing them. Assembly was straight forward enough, although with one exception, I decided to go for ‘sleeved’ tabards, which reduced the choice of poses and weapons available. 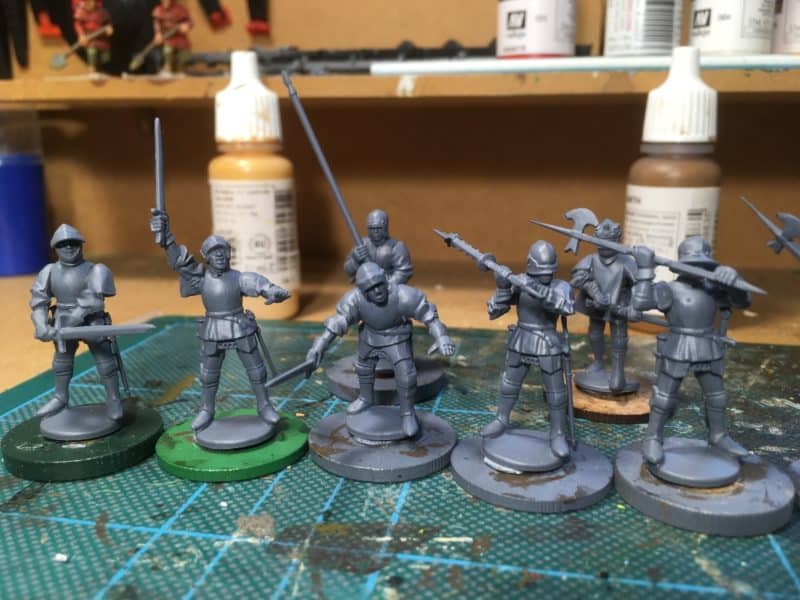 Knights with tabards, assembled and ready for priming.

Incidentally, in the background of the picture above, you can see that I have also assembled the final 2 of the 38 figures in the Perry’s set – Richard III and his standard bearer – they may not make it into the army but I will complete them. Painting the figures was fairly straight forward, it was deciding on the colours of the livery that caused me a problem. Despite doing  a degree of research, I reminded myself that I was initially building a generic WOTR force for our club games rather than a specific order of battle. This did simplify things in my mind and so I went with a fairly limited set of colours for the livery and I haven’t worried too much about what or who the livery represents at this stage. 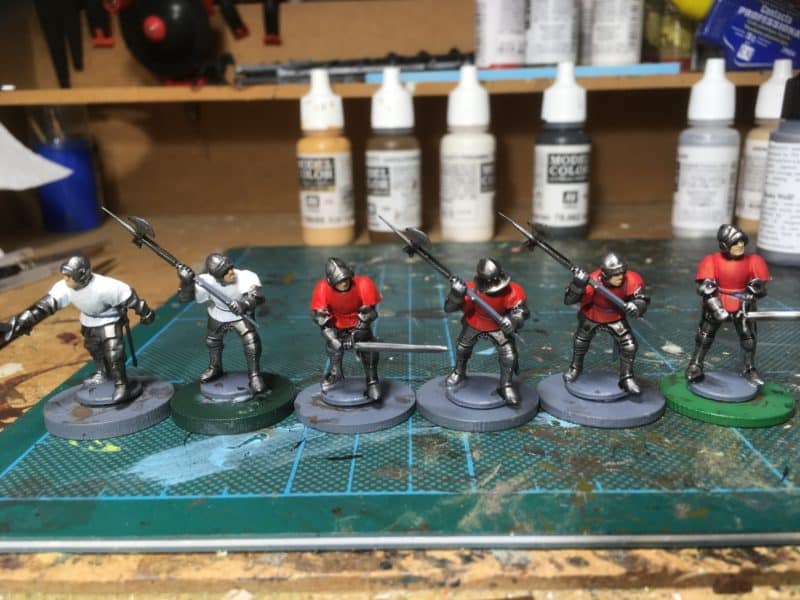 I followed more or less the same procedure for painting the armour. I used Army Painter plate mail, gave this a heavy Dark Tone Ink wash and then re highlighted by dry brushing with Plate mail and then Vallejo Silver. The Tabards were just block painted, although I did use soft tone ink and red ink to do some shading. 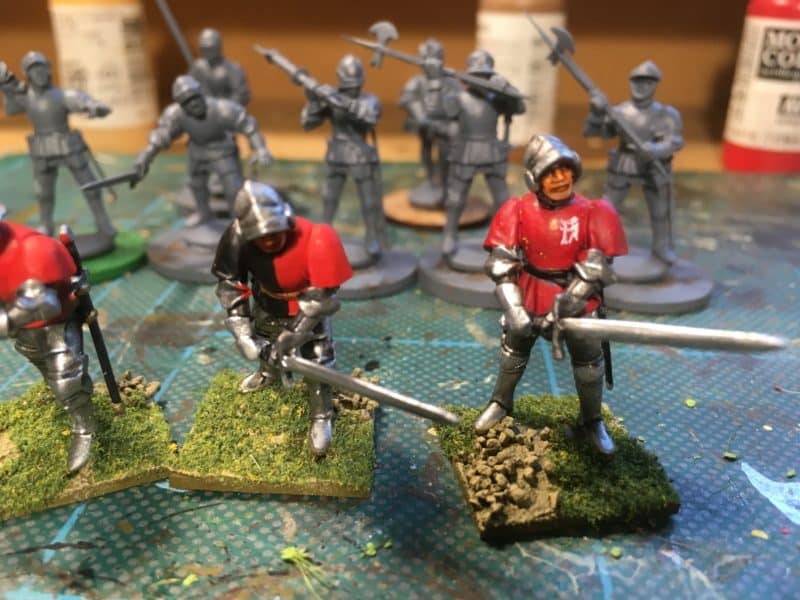 Tabards painted and figures based.

The picture above shows three of the finished figures. You can see that I attempted to paint Warwicks badge on one of the figures…It just about passes from a distance but I decided that I would leave the others without a badge until I can find suitable decals. Besides, my eye’s were at the limit of their endurance! 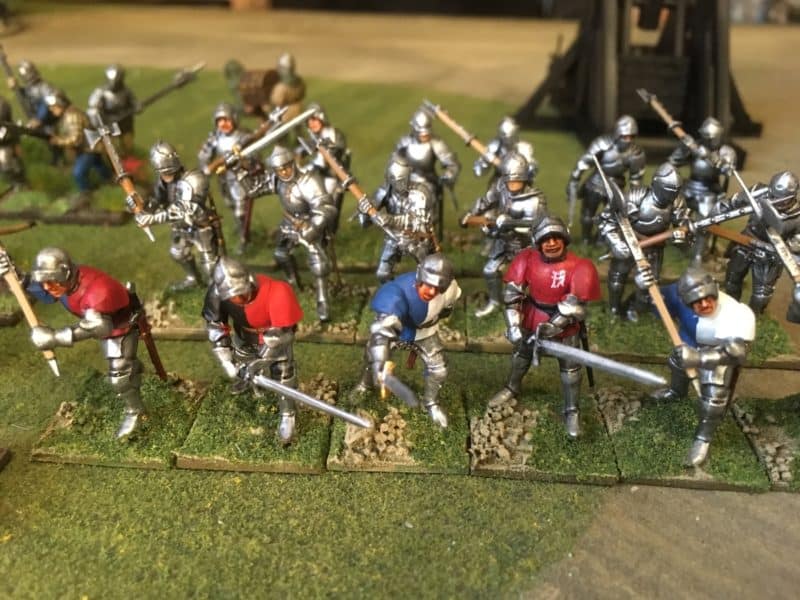 The final six Foot Knights are almost complete. I just need paint some of the details, add some washes and finish the basing. 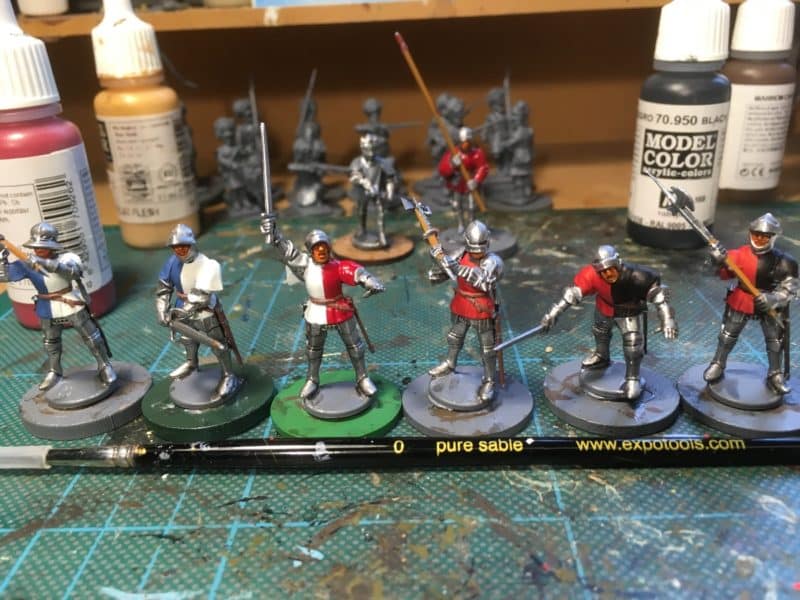 The final batch on the work bench.

With the core of my force completed, we have already started to test our rules set and have played our first game of ‘Never mind the Billhooks’. The rules have been written specifically for generic WOTR battles by Andy Callan and played well on the first game. Once we have knocked them into shape, with Andy’s permission, I’ll put them up on the blog as a free PDF download. We plan to fight a series WOTR battles using our own House retinues over the coming year. Sir Harry Hotspur being the leader of my band. No doubt, Lord Bingham, Sir Peter of Woodborough and Lady Jasmine of Papplewick will be just as capricious at choosing allegiances as the real participants of the War Of The Roses!

Of course, my retinue is far from complete. I need a few more skirmishers and badly need some cavalry support, so I will add these in over the next few weeks. For now though, let battle commence!

We carry the full range of Perry’s Plastic sets. You can see the WOTR sets here:

We have a huge range of paints and basing products in stock. We carry Vallejo Model Colour and the Army Painter range. Also in stock is the full range of Renedra bases. Even better we post free to most worldwide locations!