It seems at the moment, I am easily distracted. I have been giving the DeeZee range a bit of an overhaul with a view to perhaps extending it in the New Year. Whilst going through the display models I noticed that the Brontotherium was looking a bit tired and that we didn’t even have a painted example on the web site so I thought that painting a new display model would be a nice little project.

For those that don’t know, a Brontotherium (‘thunder beast’) is an extinct genus of prehistoric odd-toed ungulate mammal of the family Brontotheriidae, an extinct group of rhinoceros-like browsers related to horses. The genus was found in North America during the Late Eocene. Many Brontotherium remains have been found in South Dakota and Nebraska. In the past, specimens exposed by severe rainstorms were found by Native Americans of the Sioux tribe. The Sioux believed these creatures produced thunderstorms when running over the clouds, and called them “thunder horses”.  Many of the skeletons found by the Sioux belonged to herds which were killed by volcanic eruptions of the Rocky Mountains, which were volcanically active at the time. 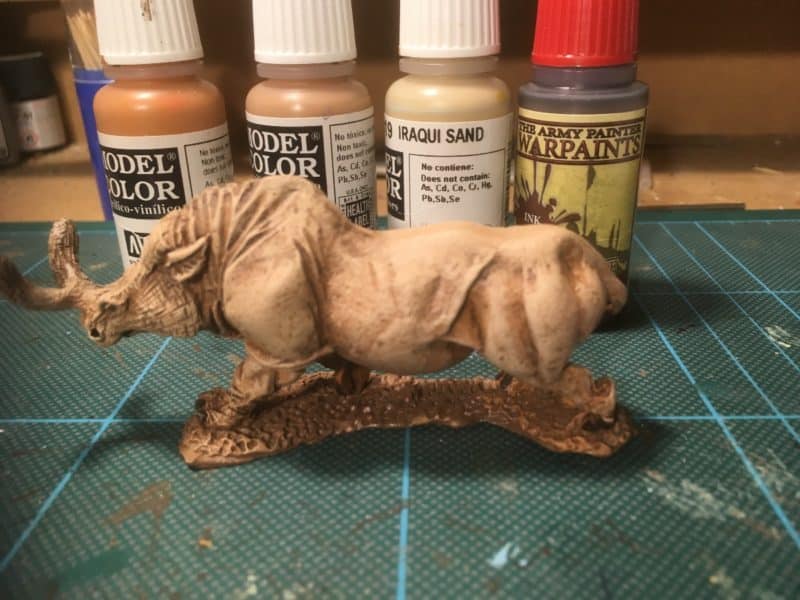 I decided to paint my Bronto in brown rather than as some references, that show them as grey. I had also decide to use a limited pallet of just three colours, Vallejo Light Brown 70929, Cork Brown 70843 and Iraqi sand 70819. I took the same approach as if I was painting a horse. Once cleaned up and primed with Army Painter Leather brown, I first used a large brush to roughly coat the Bronto with the light brown. To give a bit of definition, I then liberally applied a wash of Army Painter strong tone ink. When the ink was dry, it was just a case of using a large brush to dry brush a succession of coats using lighter shades of the three colours mentioned above. I picked the eyes out in Black and painted the hooves and tail in a dark black brown (70822). It was all done in about 30 minutes! 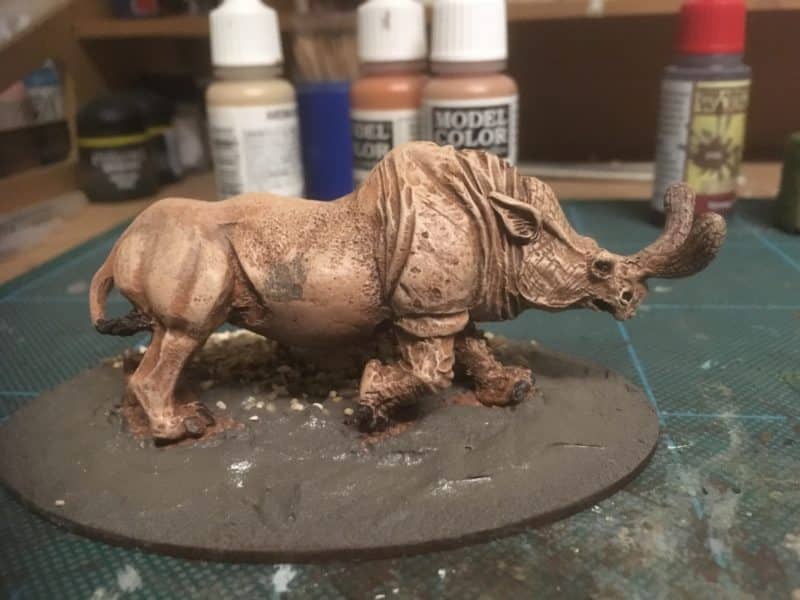 The next job was to base Bronto. As usual, I attached the model to an MDF base using Vallejo Dark earth textured paste. I also set some rocks into the paste and pressed in some coarse sand for additional texture. 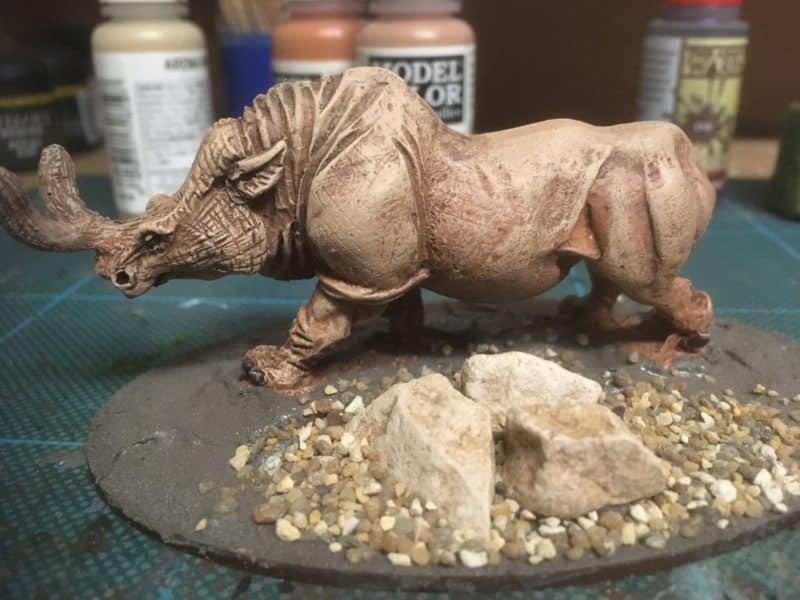 I then painted the base using my favourite basing paint, Dulux ‘Dehli Bazzaar’. I have mentioned before that I think that it makes sense to use Emulsion paints for basing rather than the more expensive paints that we use to paint the actual models. I had actually got out of the habit and was going through Vallejo Chocolate brown bottles rather quickly until I remembered my own advice! 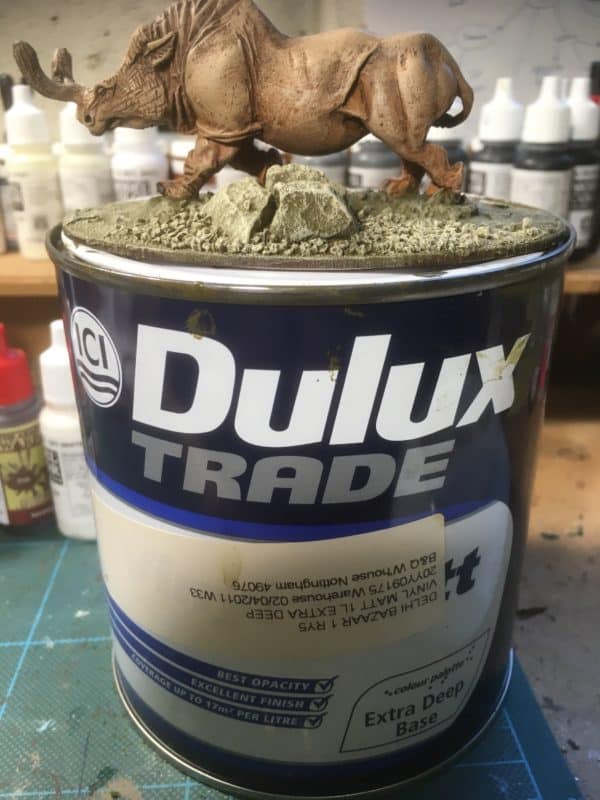 A tin of emulsion goes a long way!

I am happy to mix Vallejo paints with the emulsion but obviously in small quantities. I this case, I used Iraqi Sand to provide highlights and simply dry brushed over the base coat.

The next job was to detail the base by adding some grass. I wanted some long grass for the Brontotherium to be charging out off. Woodlands scenic make packs of long grass and this seemed ideal. 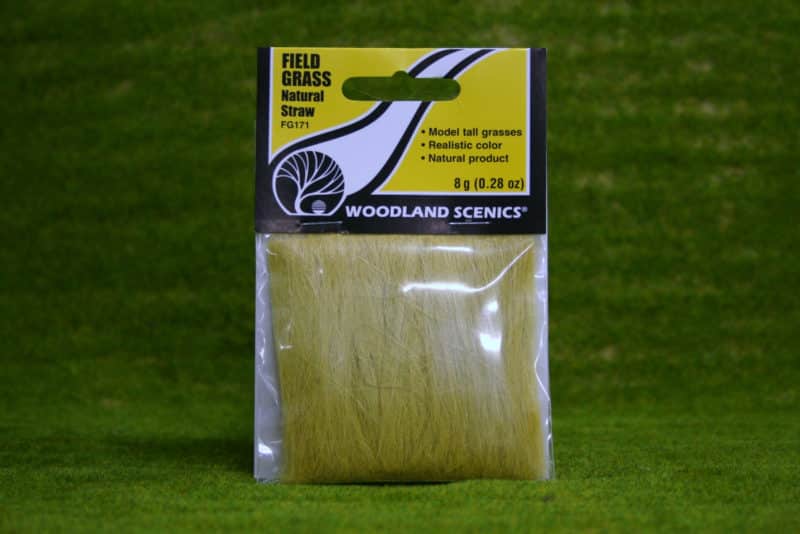 It was the first time that I had used this type of grass but it worked very well. There is a surprising amount of material in the packet and a little goes a long way! I Just took small clumps, cut them to size and then fixed them to the base using a hot glue gun. PVA would have worked but would have taken longer to dry. I have since found this video from the terrain tutor on you tube which shows an alternative method of producing long grass clumps – I’ve tried it and it works well! I now have a batch ready for another project:

I also used some Woodland Scenics yellow coarse foliage to hide any glue around the base of the long grass and added some Beige coloured Gamers grass tufts. 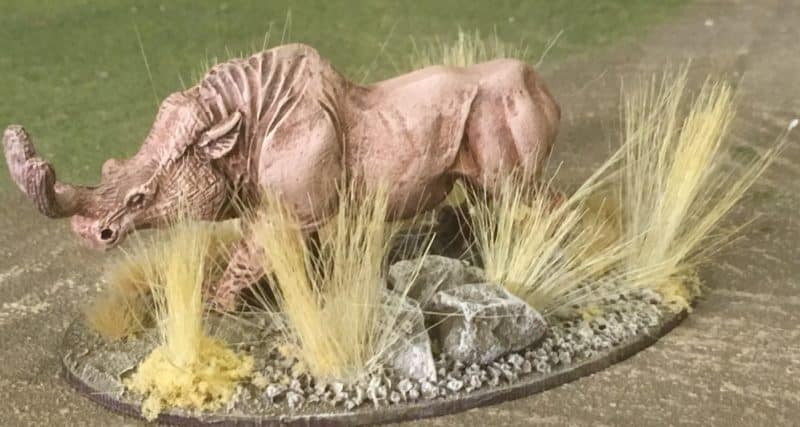 The whole project was surprisingly quick and simple to complete and I now have a new display model for my DeeZee range. If you would like to see the rest of the range, the links, as usual are to be found below the final photo. 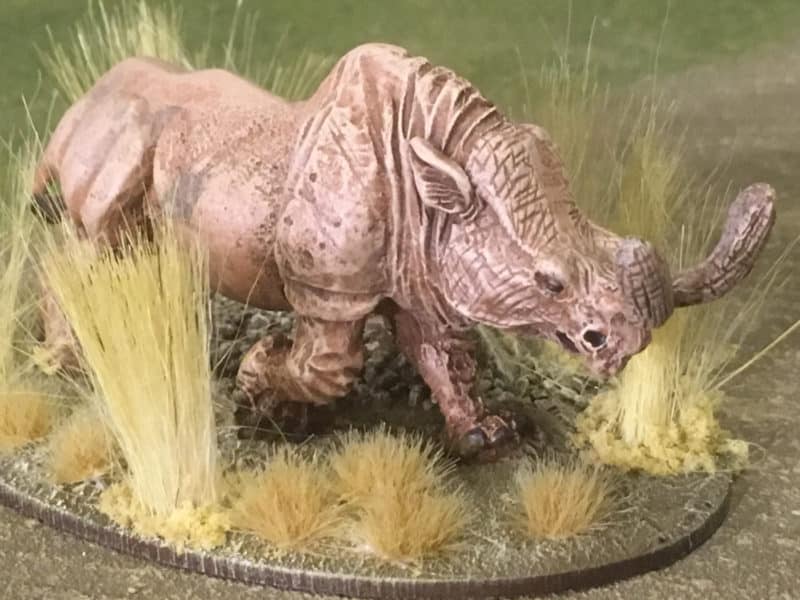 Most of the products used in my Blog ( except the Dulux paint!) are available post free to most worldwide locations ( at the time of writing) and can be found here: