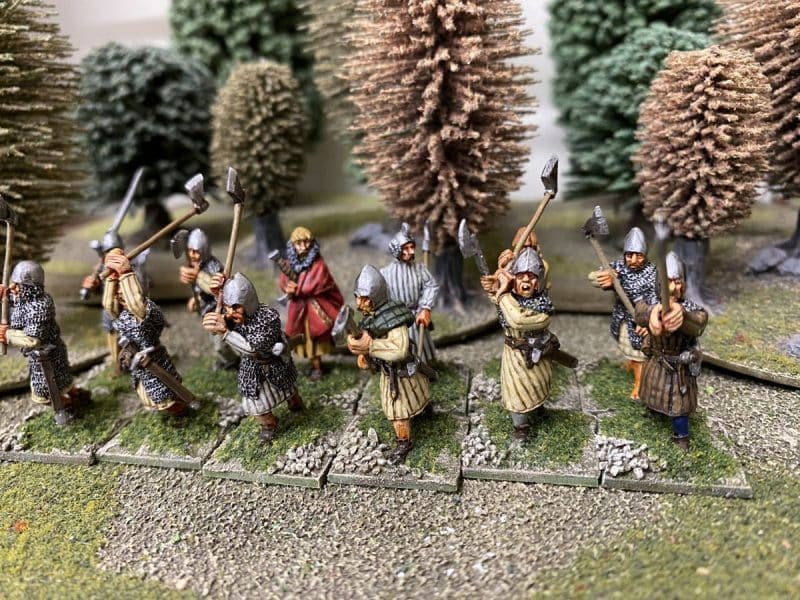 I’ve been aware that in my recent blogs have focused on what I’ve been doing without giving too many details of how I’ve been doing it or why! Part of the problem is that I have a number of threads and projects going on at once. One of these is to produce an Irish contingent for my War of The Roses army. I don’t have a special affinity for Irish warriors,(although I do have an Irish Saga band). My interest lies with the appearance and involvement of some of the Irish nobility at the Battle of Stokes Field on 16th June 1487.

I have visited the Stoke Field battlefield on a number of occasions – it’s just down the road from where I live! If you would like to know more about the battle and battlefield, my earlier blog article has plenty of pictures and some useful links:

THE BATTLE OF STOKE FIELD

It’s also interesting to note that as well as the main battle, a number of smaller engagements took place before the main event, including three days of skirmishing through Sherwood Forest, where Lord scales’ Cavalry force delayed the rebels advance. Andy Callan used these events to come up with a fictional prequel to the main battle and wrote an article for Wargames illustrated ( issue 394) which involved the Irish, German and Rebel English coming into contact with an advance guard of the Lancastrian (Tudor) army. You can read our battle report here:

According to the chronicles of the time, the Irish troops were mainly lightly armed Kern. However, I’m guessing that the nobility had brought along a few more heavily armoured Gallowglass. That said, compared to the plate armoured nobility in the English army, even the Gallowglass would look lightly armoured, wearing at most, long mail shirts over padded or quilted jackets. The most famous contemporary depiction of Gallowglass that I am aware of is the Durer picture:

I was delighted to find that Antediluven Models has produced miniatures base on this picture and in addition had a nice range of both Irish Gallowglass and Kern. I had already had a number of packs of the Perry miniatures models in my army, so the chance to add a few different models was too good to miss.The Antediluvian models are about the same size as the Perry’s and the two mix well together. This would allow me to complete two blocks of 12 Gallowglass and still have some figures left over from previous acquisitions to make up a couple of command bases. I ordered three packs of Gallowglass from them ( including the Durer models) and prepared and primed them ready for painting.

The castings that arrived were excellent, requiring very little preparation other than a scrape of the odd mold line. I primed the models in black and then painted the flesh with vallejo Flesh 70955. The mail, helmets and weapons were painted with Army painter plate mail, the quilted jackets in Vallejo Buff 70968, belts boots and scabards in Leather brown 70871, the axe hafts in panzer aces old wood 310.

I then gave the models a good wash of Army painter soft tone, except the flesh areas, which I used the Vallejo Flesh wash as a shade. Once the washes had dried, I highlighted the models with the same colours to bring out the details, leaving the darker wash in the recesses. The faces and flesh were highlighted with Flat Flesh 70955 and then Basic skin tone 70815 for an extra highlight.

As usual, I based the models with Vallejo dark earth textured paste and added some ballast for detail. The bases were then painted in my usual style, using Delhi Bazaar emulsion as the base, highlighted with Iraqi Sand and then a touch of white. I then added some grass scatter and some Gamers grass tufts to finish.

When it came to the Durer models, I tried to follow the colours on the Antediluvian site as well as referring to the picture above. Although the colours were different, the process was the same – block paint, shade with inks and highlight with the original colours, with a bit of Off white 70820 or Iraqi sand 70819 added to give an extra layer. It’s worth mentioning that I also used Vallejo Yellow Ochre 70893 as a base for the yellow cloth and for the lighter coloured quilted jacket, Deck tan 70986, works really well.

So with another 12 Gallowglass models completed, I now have a nice force of 24 of these heavy hitters ready to take to the table. Next up for the Irish will be some more Kern.

We also have a category devoted to Never Mind the Bill Hooks:

We don’t stock Antediluvian miniatures you will have to go direct to their web site. I’m very happy to recommend them, the service and turnaround time on my order was excellent and the miniatures superb: