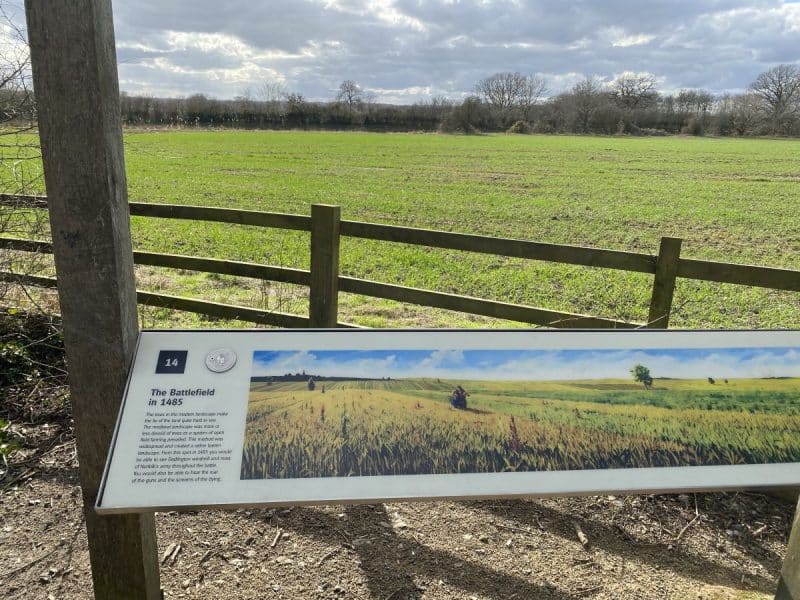 Back on the 12th March, I found myself with a free weekend – the Missus was off for a long weekend with her sisters, so it was my opportunity to visit yet another local battlefield. Accompanied by fellow Bill Hooker and war gamer, Pete Harris, we made the 50 minute drive from Bingham to the Bosworth Heritage centre. The weather was kind to us as, although a bit breezy and chilly, it was dry and sunny. We arrived at the Bosworth Heritage Centre at around 11.30am

I had already pre booked our tickets for both the visitor centre and the guided walk. So once we had booked in and collected our tickets, the first port of call was the Tythe barn Tea rooms for a cuppa and a sausage roll! It’s worth noting that we found all of the staff to be really friendly and helpful through out the visit. In addition, the tickets to the exhibition are valid for a year, so if I fancy another visit in the summer, I can pop back.

As you can see, the Tea rooms are very nice, clean and welcoming. The food is good too! The cakes are particularly nice…back to the purpose of the visit! Once we had finished our ‘Second Breakfast’ we started our tour of the visitor centre.

There’s two really nice dioramas in the entrance to the exhibition. The one shown above, is, I think, a 1/12th scale model of the two main protagonists, King Richard III and Henry Tudor. The model that really caught my eye, was of the medieval cog – great reference for ‘Never Mind the Boats Hooks!

The exibition itself was excellent, with plenty of background to the battle as well as an explanation as to why the Battlefield may have ‘moved’ from it’s original location and the research that has been done to establish what is now believed to be the correct location. Of course, of greatest interest to me was the exhibits of weapons and the likely dress of the warriors involved.

We took about an hour and a half to look around the exhibition and after another quick pit stop for lunch, it was time for our guided walk of the battlefield. The walk started from the visitor centre courtyard, with a brief overview of the two sides and then we proceeded to the site of King Richard III’s camp on Ambion hill. From here we had a great view of the area and could just about make out where Henry Tudor would have camped over night and where the Stanley Brothers set up their camp. The tour skirted around the battlefield as much of it is on private land. This meant the we kept to the public footpaths but it did mean that the walking was nice and easy!

Our tour guide was extremely well informed both about the battle and the period and explained the back ground to the battle, who the main characters involved were, the politics of the time and how events unfolded.

Our guide was dealing with various degrees of knowledge in his audience, from those who had no idea as to why the battle had taken place to ‘smart Alecs’, like the two wargamers that were tagging along. To be fair, Pete and I kept quiet and listened! I did take part in a mini re-fight of the battle, representing William Stanley to illustrate how the combatants were positioned! All part of our guide trying to involve the audience and keep them engaged.

The tour took around and hour and a half, so it was just after 3.00pm when we returned to the visitor centre. We visited the shop and I treated myself to a book on the battle and a few souvenirs. Whilst the selection of books was very good, I was a bit disappointed with the souvenirs. I suspect that the shop was still recovering from the problems caused by COVID but the selection of post cards etc was not great. There also wasn’t any sort of guide book or leaflet that I could find. I consoled myself with another visit to the Tythe Barn and finished the day with a hot chocolate and massive cherry and almond scone! I had to replace all those calories burnt on the walk…

Overall, I had a great day. We left the centre at around 4.30pm, even though it actually closed at 4.00pm, the cafe stayed open whilst we finished our drinks and snack. Once again, the staff were brilliant – there was no rush, they left us to finish up! So, if you are able to get to Bosworth, I would very much recommend a visit to the battlefield and exhibition centre. It certainly filled a day and even if you don’t sign up for the guided tour, there’s nothing to stop you wandering around the beautiful Leicestershire country side and enjoying a picnic! As I have mentioned, my ticket will last for a year, so I think that I might just pop back when one of the many events are on to have a second look around.

To see our selection of soldiers and accessories for Never mind the Bill Hooks, the rules set designed for War of the Roses, click here: 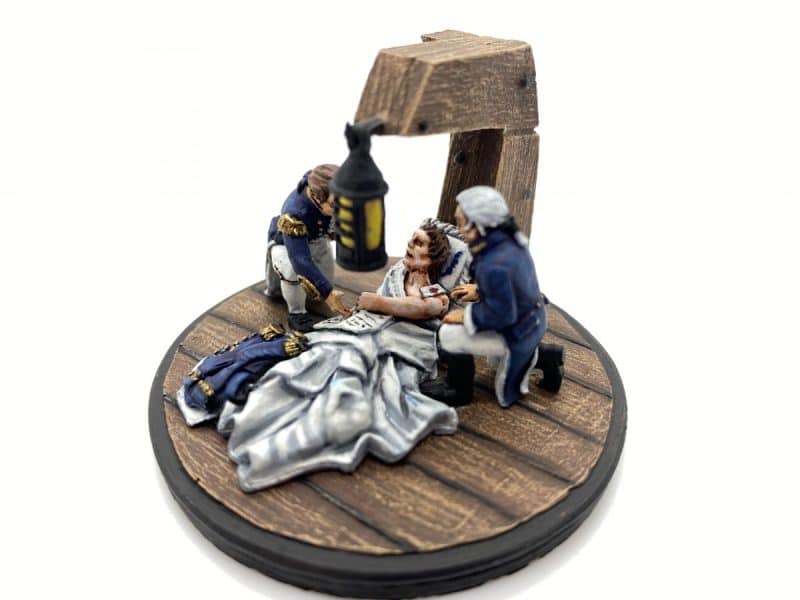 Whilst I am still very much involved with producing my own Medieval Naval force, It’s good to have a break in between projects. For me, this involves painting something from the ‘Lead pile’. Regular readers will know that I am somewhat obsessed with reducing the number of unpainted figures in the ‘heap’ and the one minor benefit of the recent lock downs has been that I have made some progress.

So whilst I was in a nautical mood, I decided to have a go at painting a small diorama that I had acquired years ago. It is the Moments in Miniature model of the Death of Nelson issued by Wargames Illustrated Magazine. It’s a lovely piece, well sculpted and includes a nice resin base. A deep dive into my back issues of Wargames Illustrated and I found the original article that accompanied the release of this piece. I simply copied the pictures that accompanied the article. Well, up to a point. The article was by the master painter, Matt Parkes and showed how to paint the model as though it was illuminated by yellow lantern light. That was too fancy for me. I just wanted to paint the piece for my cabinet!

I’m fairly pleased with the result, although I have received a number of comments regarding how ill Nelson looks. I guess the clue is in the name. Poor Nelson is not going to recover from his wounds!

I have also been steadily working through the Battlegames in Middle Earth magazine figures and I have now reached issue 23, having completed the Men of Gondor and Gimli, the Dwarf.

Which brings me back to the lead pile. I have decided that my lead pile consists of three categories of models.

Well, my focus now is on Category three. I’m not going to worry about category one any more, other than to sort them and either get rid of them or put them into deep storage. As for category two, it’s just an inevitable part of the hobby. You will always have spares and bits. They are now sorted by category and if I need a type of figure for a project, I’ll check my stash before I buy but I’m not going to worry about painting these until I need them.

So, Category three will get my attention. That is in between the painting and modelling that I need to do to complete my latest project. And when it comes to my latest project, I have resolved only to buy what I need and can paint in a reasonable time scale. In other words rather than buy a whole army that then sits there whilst I summon up the energy to get on with it, I’m just buying one or two units at a time and painting them before buying anything else.

Meanwhile, as you can see, my Medieval fleet is still growing, I’m going to add at least one more cog and some smaller row boats for support.

Which reminds me, I might just scratch build a great ship to lead my fleet in action…