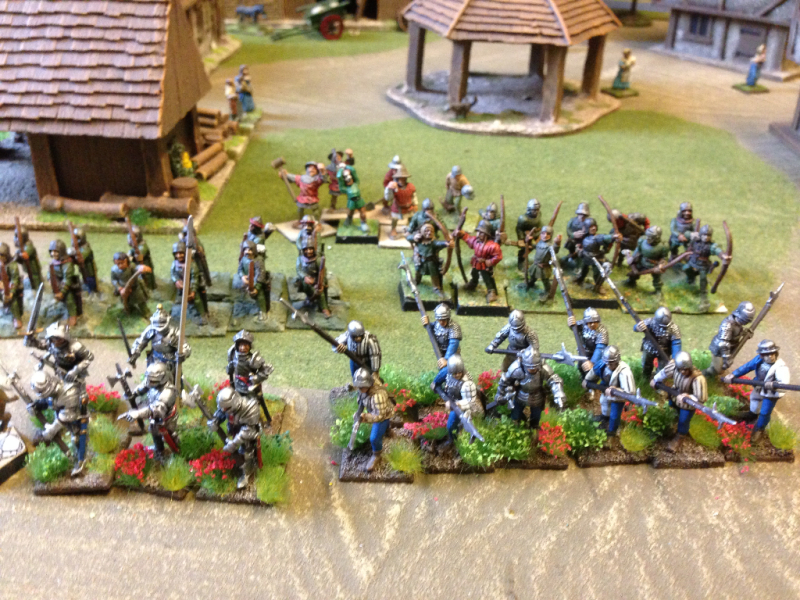 Well that was the question I asked myself when putting together my Lion Rampant retinue. With just 6 men in the unit, an armour value of  1 ( 2 when shot at) and a points value of 2, I couldn’t see why I would bother having these in my retinue. The fact was that I had never heard of a Bidower before, come to that, neither has Wickipedia. A google search revealed the following link, which was sort of useful:

So why would I have them in my Lion Rampant retinue. Well, after a number of battles facing these units, I realised that despite their cheap cost, they were very useful indeed. For a start, they move on a 5+, and they move quickly, 8 inches a turn and are not slowed by rough terrain. Add to this that they can Skirmish ( shoot and move), cant be targeted from over 12 inches and have the ability to evade. If they do get caught in hand to hand they are going to be slaughtered by most units on foot. However, in rough ground they can hold their own against mounted men at arms, even dragging them into combat ( on a Fierce Charge) on equal terms.

I soon learnt that they were very useful indeed, particularly after they had badly mauled my unit of Foot knights and killed my Leader ( now named Kenny, as he seems to die in every battle) before I could close with them and finish them off. The result is that I have now included a unit of Bidowers in my army. OK, it’s another 6 men to paint but it will give me just a little bit more flexibilty in battle.

And flexibility is badly needed in my retinue. Having chosen the later English retinue from the Lion Rampant rule book, I have found that although they are good in a pitched battle, they can only fight in a tight defensive formation. The bowmen need protecting from any marauding foot or cavalry units by my Foot Knights & Sergeants. So I have made the Foot Sergeants a standard unit ( allowing them to form Schiltron) to save the 2 points need to add the Bidowers. I’ll still need to fight on the defensive & try to lure or goad my opponents to advance within arrow range but once the two expert archers get to fire they cause mayhem among most of the opposition units.

So it’s back to the battlefield tonight with my new look army to see how it can cope with the new tactics that I have planned! The picture at the top of the page shows my latest finished unit, the Foot Sergeants and here is the army that I will field tonight. The archers & bidowers are still temporary units made up from some very old figures that were kicking around in my spares box! They will need rebasing & touching up before they become permanent additions. However, the plan is to replace them with archers from the Perry’s boxed set. The next batch is on the work bench as I write! Much as I am committed to my Lion Rampant retinue, I couldn’t stop work on my Napoleonic Army. I intend to  complete the 6th Division as it appeared at Waterloo ( with some artistic licence, of course). Having added another Hanoverian Battalion, I decided to go back to the British. I had already painted the 1/27th Inniskillins, and the 1/4th Kings Own, so the final British battalion in the Division was the 1/40 2nd Sommersetshires. This battalion has buff facings and so is very similar to the 1/27th. Fortunately, when I assembled this unit from the Perry boxed set, I made all of the figures, so in effect I had 12 extra men already finished in buff facings. It is now just a question of adding the command group of 6 and 6 figures to represent the flank companies and another battalion is ready for battle. As usual, I will use the Mont St Jean web site for reference when painting, but for the time being, here are a few pictures of the additional models being assembled & made ready! As you will see, the easiest way of making the command group was to order a spare command sprue from the Perry web site. I’ve slightly altered the Officer and used a head from the Victrix set to make him different from the 1/27th officer. I’ve also added in a Sapper from a Victrix metal command set. As a side project, I’ll also paint the mounted Colonels that the Sapper came with as Officers for the Battalions, which will use up the whole pack and reduce my lead mountain reserve slightly! The rest of the command are assembled as usual.

For the Flank Companys’ I have used a mixture of Perry’s & Victrix parts to make the six required figures. Here’s the Left flank: And here is the Right Flank: As you can see, the Perrys (grey plastic) and the Victrix (Light Brown plastic), mix very well and there is very little difference in the size of the figures so they are quite compatible. Mixing sets is a very simple way of making conversions and giving variation to the troops in a unit. So it’s just the painting now…. 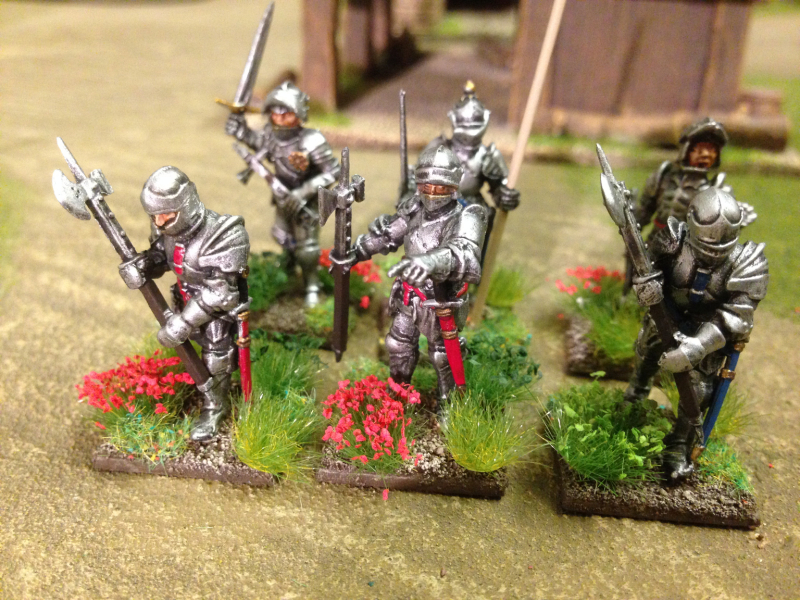 I mentioned in my blog earlier that I had signed up for the Wargames Illustrated Magazine’s Lion Rampant day, to be held on 31st January 2015. Although it seems some way off, I thought that I better start putting my retinue together and of course practicing the game. As I am somewhat focused on collecting English Armies (and their Allies!), I thought that I would start with a typical English Warband. In the LR rules this breaks down to: a unit of 6 foot men at arms; a unit of 12 ‘expert’ foot sergeants and two units of 12 ‘expert’ Bowmen; a total of 42 figures to assemble and paint.

I could save a bit of painting time by having two units of 6 foot men at arms but this will make the army quite fragile. However, in the short term it will speed the process of having my own retinue finished. The beauty of the English Retinue is that I think that I will be able to build most of the figures using the Perry’s Wars of The Roses Plastic boxed set, which has 40 figures, a good mix of which are either archers or Bill men (foot sergeants). So for an outlay of £12 for the rules and £20 for the figures, I’m in the game! For those of you not familiar with Lion Rampant, it is one of the Osprey Wargames mini rules, written by Daniel Mersey. It’s one of those clever rules sets that does what it says, it really is straight forward and simple to learn, easy to play and has enough subtlety to keep players engaged. As I have previously noted, this type of skirmish game is a great way to explore a historical genre before you pile in and build a huge army. Even better, the small war bands allow you to mix & match different troop types. So if my English Army doesn’t work for me or if I fancy a change, it wont take too much effort to produce, say, a Templar war retinue.

The game itself is a bit like Saga Rules, but without the Saga board – all the action takes place on the table and combat is resolved quickly by rolling either 6 or 12 dice. A simple attack & defence mechanic determines how many casualties are inflicted and then it’s down to morale – which unit has the stomach for a fight! The fog of war comes in the order system, you roll a dice to see if a unit will activate or not. If it activates ( Moves , Attacks etc) then you go to the next unit. If not, your opponent gets the turn. This soon opens up opportunities or causes problems, depending on which side of the table that you are on! Of course, the other fun comes from the scissors, rock, paper effect of matching one type of troop to another.

So, I have painted my first unit, the foot men at arms. It’ a bit of a motley crew -4 of the figures are Perry plastics, and two are spare metal figures that I had lurking in my lead mountain! In fact I think that both were figures given out at past Newark wargames shows, one of which I painted some years ago & just needed rebasing. Painting was fairly straight forward, I spray undercoated the figures in Plate mail, gave them a dry brush with silver, painted the cloth & leather bits ( Scabard & belts etc) blue or red for a bit of colour, and gold for the sword pommels, brown for any wood. Then a good wash of black ink, brought out the detail before re highlighting the armour. Basing is done using Sandy paste to level up the figures on the renedra 20mm  plastic bases, then extra sand added & painted in chocolate brown & highlighted & dry bushed with Iraqi Sand. I finished off with a liberal dose of tufts and flowers…. Here’s the first unit :