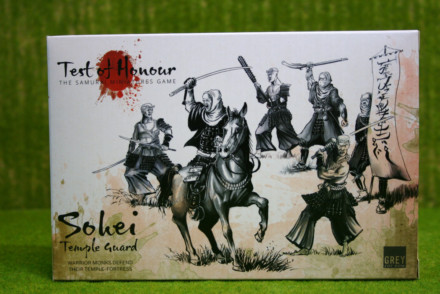 Led by Superior Saburo, the fierce Sohei warrior monks defend their sacred temple-fortresses to the last.

Superior Saburo leads the defence of the temple-fortress, galloping at his enemies to deliver a devasting one-off attack with the Dive Strike card.

The Sohei sergeant can send his troops surging forward in a sudden wave (or unleash a sudden blast of gunfire if you use him as a gunnery sergeaant) – a definite contrast to the steady ashigaru of the clans.

Meanwhile the Creed Bearer carries a banner daubed with inspiring prayers and religious slogans, making it more likely for nearby believers to trigger their Strike bonuses.

The devout Temple Guards themselves are the toughest fighters, hand-picked from among the warrior monks and able to shrug off minor injuries and carry on the battle unaffected. You can make them even harder to defeat with the Final Guardians trait!

Box contains 18 gaming cards for Test of Honour and 6 metal miniatures plus bases.

Please note that the picture shows the models finished and painted for display purposes. You will receive unpainted unassembled models. Bases, basing material flags, banners, spears are not supplied.

Footsore Miniatures is a joint venture between three good friends with the aim of providing high quality metal miniatures to wargamers and collectors worldwide.

Reviews (0)
This Day In History
Subscribe to our newsletter!