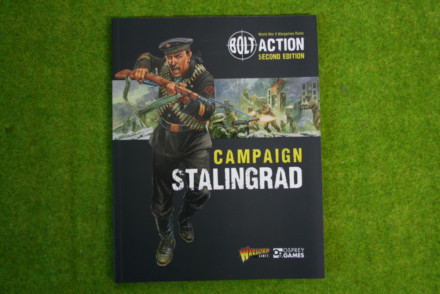 This campaign book seeks to help wargamers recreate the incredible struggles between the German Wehrmacht and the Soviet Red Army for control of the region between the Don and Volga rivers – ultimately centring on the city of Stalingrad.

This six-month-long battle saw some of the fiercest fighting of the war, with each side losing hundreds of thousands of men and culminating in the encirclement and eventual destruction of the German Sixth Army.

While this book provides a historical overview of the Stalingrad campaign, its primary purpose is to provide new scenarios, rules, and inspiration to help wargamers bring this bitter struggle to life on the tabletop.

This book covers the southern region of the Ostfront from August 1942 to February 1943 including:

The opposed crossing of the Don River
The dash to the Volga river by German mobile divisions
Soviet counter-attacks against the German cordon of Stalingrad
The fighting for control of the city of Stalingrad
Operation Uranus and the subsequent encirclement of the German Sixth Army
Operation Winter Tempest: Manstein’s attempt to break the encirclement of the Sixth Army
The final destruction of the Sixth Army

Warlord Miniatures are an exciting company producing excellent quality figures in 28mm and 1/56 scale that are designed for the serious modeler, collector and wargamer. The troops are produced in plastic, metal and resin allowing you to build large troop formations at a great price.