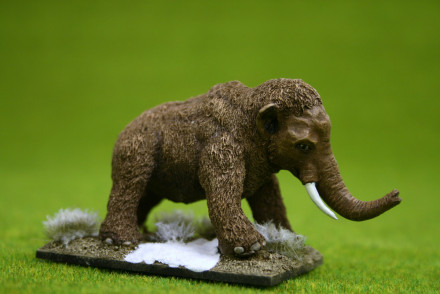 A mammoth is any species of an extinct genus of proboscidean (elephants and their extinct relatives), often with long curved tusks and, in northern species, a covering of long hair. They lived from the Pliocene epoch from 4.8 million years ago to around 4,500 years ago.

The word mammoth comes from the Russian mamont, probably in turn from the Vogul (Mansi) language.

Mammoth remains have been found in Europe, Africa, Asia, and North America. They are believed to have originally evolved in North Africa about 4.8 million years ago, during the Pliocene, where bones of Mammuthus africanavus have been found in Chad, Libya, Morocco and Tunisia. Mammuthus subplanifrons, found in South Africa and Kenya, is also believed to be one of the oldest species (about 4 million years ago).

THIS MODEL IS RESIN with separate tusks.

The DeeZee range has been designed to go with the Tooth and Claw rules set (also available from my shop). Of course, they are superb models in their own right and can be used as display pieces, in historical dioramas and are ideal conversion subjects for Fantasy and Scifi gaming.

Arcane Scenery and Models are proud to be authorised stockists for DeeZee Miniatures.

Please note that these models are made of metal or resin and they are not suitable for children. They have sharp points and may be harmful if they are chewed or swallowed.